Eleven Point Plan to Bust the Myth of Retirement

by Gaye Levy, Back Door Survival: 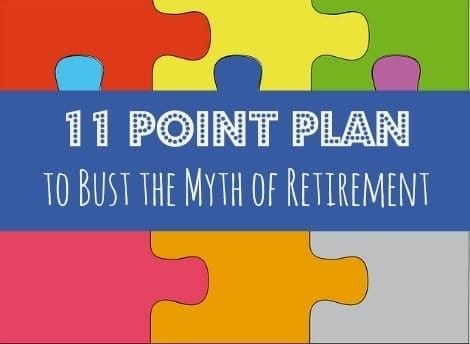 Four years ago I was both a newbie blogger and a newbie prepper. To be honest, I had a lot of angst about a lot of things. Unemployment was rampant, the housing market was in shambles, and people around me were suffering. As a woman of a certain age, I was upset and wanted to do something, anything really, to relieve some of the stress while sharing my new found journey down the path of preparedness.
At the time, my long time friend, George Ure, suggested that I start a website that would complement his own Urban Survival website. Little did I realize that this small suggestion, made in passing, would become a life-changer.
This is not the article I intended to write today but for a number of reasons, my focus changed this afternoon and after my daily hike, I decided to shift gears and take a walk down memory lane and share a newly updated muse having to do with the promise of retirement.
Read More @ BackDoorSurvival.com

Natural Gas Will Eventually Fall Below $3

Natural gas was last trading down by less than 1 percent to $3.80/mmbtu after the Energy Information Administration reported that operators injected 88 billion cubic feet into storage last week, above the 81 to 85 bcf range of analyst estimates.

The latest injection was above last year’s build of 57 bcf and above the five-year average build of 47 bcf.

In turn, inventories now stand at 2,555 bcf, which is 508 bcf below the year-ago level and 529 bcf below the five-year average (calculated using a slightly different methodology than the EIA).  (more)

The Future Price of Bitcoin, A Projection, Based on Past Performance

After much thought and contemplation, I had to come back with another video about bitcoin. The last one I did, focused on the evil government's involvement and the risks, therein. This one was supposed to be about the other side of the bitcoin, but I could not speak of the opportunities and future price, without reminding you that nothing is safe, as long as the dirty, rotten, stinking government has their filthy, parasitic hands all over things which the Constitution says are private!
You're going to be quite surprised to see the projected price of bitcoin, based on the recent past. Yet, it's just a projection and I am sure we won't see it play out, straight and simple, as portrayed in this video
Enjoy the ride and keep saying to yourself, 'It's only a movie!' We all hope things turn out the way I have forecast, but instead, we might all wind up in FEMA camps, guilty of the crime of being part of the subversive bitcoin hoodlum, drug dealing, money laundering mob, as we have been portrayed by the 'Nazi Nightly News'
Please share this article
at 12:04 AM No comments: Links to this post

There’s something interesting going on in the Cotton market right now. For the most part a lot of these soft commodities have been destroyed throughout the summer. After huge corrections like this I try to look for extremes in sentiment to see if a reversal is coming or if the free fall will continue. You see, crashes rarely come when everyone expects them to happen.
First, look at what price is doing. With this obviously being the most important thing, it’s a good place to start. We can see that there was major support just above 66 in both early 2012 and in the summer of 2012. We broke down below those levels before quickly reversing higher over the last couple of weeks. These potentially false breakdowns always catch my attention. This is how some of the most powerful squeezes are born: 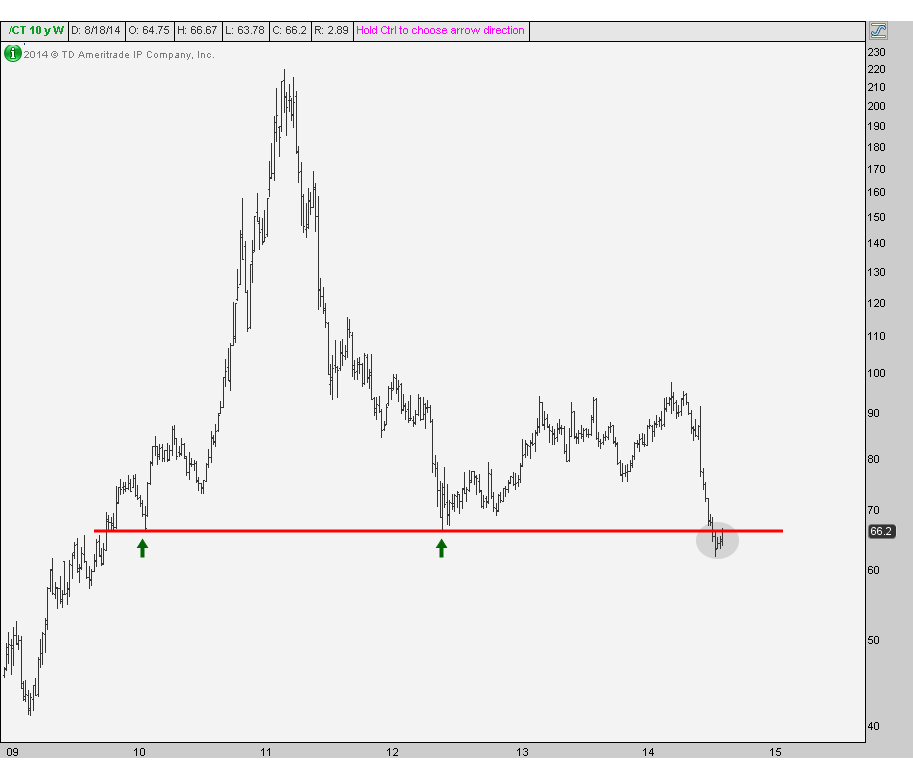 Now from a sentiment perspective, a sell-off like what we’ve just seen often takes pessimism to extreme levels. Here is an index based on a combination of surveys, Consensus Inc, options and futures market and a number of other sources. Public opinion has now reached levels rarely seen in the past. This is historically not a level of sentiment where we want to be selling:

We take this bearish sentiment and prefer to generally take the other side of the pessimism. Now, we also like to see what the smart money is doing. Are the commercial hedgers hedging? Or are they bullish on the Cotton market? This chart tells us that the smart money isn’t hedging at all and expecting Cotton to go up in price:

This is how very powerful moves are born. When you have a combination of extreme bearish sentiment, the smart money isn’t hedging, and we have a potential failed breakdown? I can’t ignore that.
Now from a price perspective, the only thing that pays us, we don’t exactly have the cleanest trade. Do we own Cotton above the absolute lows from 2010 and 2012 as we can see in the first chart above? Do we own it above the weekly closing lows from that support?
This is actually a great example of the massive difference between being an analyst and actually putting money to work. The analysis here is simple: support is there and the sentiment is screaming at us. But as far as execution goes, this isn’t an easy one.
I’m going to be patient and let things set up in my favor. Right now it’s just not there. But I thought it would add some value to point out what’s currently happening in this market. It’s really interesting isn’t it?
Please share this article
at 12:04 AM No comments: Links to this post

The Dow continues its tremendous rally from recent lows. I have stated before that it is my opinion that this is a bear market rally. Has anything happened to change that opinion? Nope, but I’ve sure got a good case of the heebie-jeebies! Let’s revise the charts to see why.
DAILY CHART 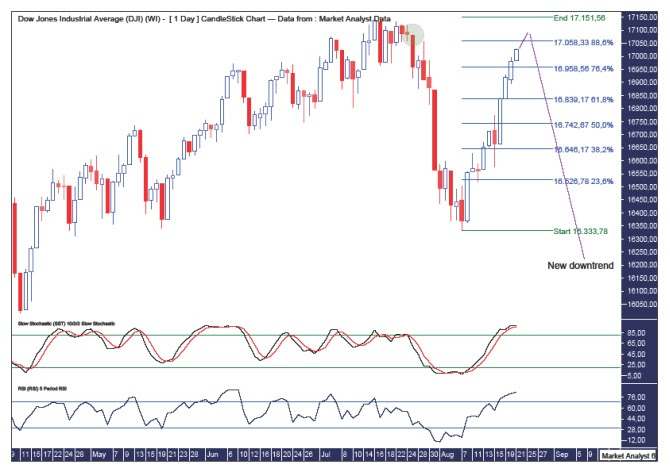 What a rally! One last hurrah for the bulls perhaps? I think so, but it’s cutting it close. I have added Fibonacci retracement levels of the move down from all time highs to the recent low. While I expected a deep retracement, I didn’t think it would get this high. I was targeting the 76.4% level at 16958 and I positioned myself accordingly. Then price just seemed to take that level in its stride. I’m generally not a day trader but I was left with no option here. A nice little sell low, buy high action. As Homer Simpson would say, “Doh!”.
READ MORE
Please share this article
at 12:03 AM No comments: Links to this post

Opportunities In The Corn And Soybean Markets 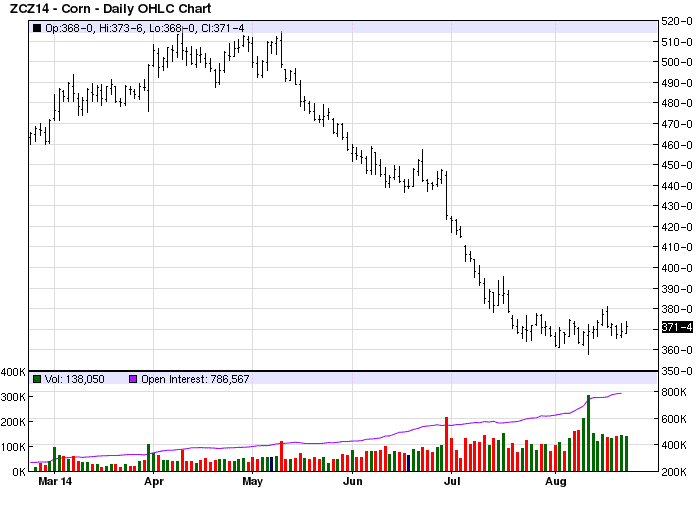 If you are a speculator, or a hedger, you can agree or disagree if U.S. farmers are growing the biggest and best corn and soybeans crops of all time. The truth be told, commodity markets have a buyer for every seller and a seller for every buyer.  Every week the Commitment of Traders reports show in each category there isn't total agreement.
However, since December corn made a high at $5.14¾ /bushel and November soybeans were as high as $12.79/bushel in May, now there seems to be a consensus that grain producers that are not price protected could have a tough time making ends meet in 2015 and they will need to sell a greater percentage of their harvest to make the same amount of cash as they did a year ago. (more)

Exploration is a tough business, making a discovery is much tougher, and advancing a real deposit through the hurdles of geology, politics, and the stock market is the hardest test and is rarely successful.
In my last letter, I said that we should move ‘down the food chain’ into companies with stellar, early-stage projects that have yet to be tested—a process also much easier said than done. You can always find a reason not to buy.
There are hundreds of properties being explored and drilled by micro-cap junior companies based out of Canada and Australia alone. Almost any one of these could deliver a good drill hole or even a legitimate discovery, but we know the odds of this happening on any single prospect are extremely low; our job is to very critically evaluate the available data, extrapolate that data into the subsurface, and make an educated guess as to the probable drill results. Basically, where could it go right, and what could go wrong?  (more)