In the latest filing for Buffett’s holding company Berkshire Hathaway, Buffett has been drastically reducing his exposure to stocks that depend on consumer purchasing habits. Berkshire sold roughly 19 million shares of Johnson & Johnson, and reduced his overall stake in “consumer product stocks” by 21%. Berkshire Hathaway also sold its entire stake in California-based computer parts supplier Intel.

With 70% of the U.S. economy dependent on consumer spending, Buffett’s apparent lack of faith in these companies’ future prospects is worrisome.

Fellow billionaire John Paulson, who made a fortune betting on the subprime mortgage meltdown, is clearing out of U.S. stocks too. During the second quarter of the year, Paulson’s hedge fund, Paulson & Co., dumped 14 million shares of JPMorgan Chase. The fund also dumped its entire position in discount retailer Family Dollar and consumer-goods maker Sara Lee.

Finally, billionaire George Soros recently sold nearly all of his bank stocks, including shares of JPMorgan Chase, Citigroup, and Goldman Sachs. Between the three banks, Soros sold more than a million shares.

So why are these billionaires dumping their shares of U.S. companies?

After all, the stock market is still in the midst of its historic rally. Real estate prices have finally leveled off, and for the first time in five years are actually rising in many locations. And the unemployment rate seems to have stabilized.

It’s very likely that these professional investors are aware of specific research that points toward a massive market correction, as much as 90%.

One such person publishing this research is Robert Wiedemer, an esteemed economist and author of the New York Times best-selling book Aftershock. (more)

The Dow High Nobody Believes

The Dow Jones Industrials has rallied in the face of incredible skepticism with a litany of reasons why it shouldn’t be happening, that are of course all domestic oriented. This is fantastic for it shows the market is NOT historically at a high. Bubbles come when the vast majority claim the rally will never end. What is happening here is a lot of clever people keep selling and getting stopped out. They are fueling the rise and that is VERY GOOD for the long-term.

The market gods are NEVER generous. They give you one chance only to sell the ALL-TIME HIGH OF HIGHS or buy the HISTORIC MAJOR LOW. The more a market keeps knocking on the same door, the chances are that door will open.The curious aspect is the overwhelming news coverage is saying this is a top that could begrudgingly go a little higher. The likelihood is clear – by NO MEAN are we dealing with a major high.  (more)

NuVasive, Inc., a medical device company, engages in the design, development, and marketing of minimally disruptive surgical products and procedures for the spine. The company's products focus on applications for spine fusion surgery. It offers products primarily for the thoracolumbar spine and cervical spine. The company's principal products include a minimally disruptive surgical platform called Maximum Access Surgery (MAS), as well as cervical, biologics, and motion preservation products. Its MAS platform combines four categories of product offerings, including NVM5 and NVJJB, its proprietary software-driven nerve monitoring systems; MaXcess system that provides access to the spine with minimal soft tissue disruption; specialized implants that are used for interbody disc height restoration for fusion and stabilization of the spine, as well as biologic products comprising FormaGraft, a collagen-based synthetic bone substitute and Osteocel Plus, an allograft cellular matrix. Its biologic products also comprise AttraX, a synthetic bone graft material; and Triad, an allograft cellular matrix containing viable mesenchymal stem cells. In addition, the company offers a range of bone allograft in patented saline packaging; disposables and spine implants under the CoRoent brand name; and fixation devices, such as rods, plates, and screws.
To analyze NuVasive's stock for potential trading opportunities, please take a look at the 1-year chart of NUVA (NuVasive, Inc.) below with my added notations: 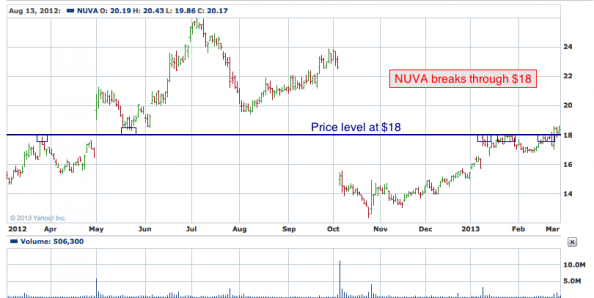 The main price level to watch on NUVA is $18 (navy). Not only is the $18 resistance readily apparent over the (2) months and back in March, but that price also acted as support back in May. So, the $18 level is key to this stock. If you are bullish, you would want to buy the stock on a pullback to $18. However, if you are bearish, you might short NUVA on a break of the $18 support.
The Tale of the Tape: NUVA has a couple of simple trading opportunities based on its key level of $18. A long position could be entered at the $18 support with a stop placed below that level, or a short play could be made on a break below $18 if that should happen.
Please bookmark us
at 12:04 AM No comments: Links to this post

Pinetree Capital (TSX: T.PNP, Stock Forum; 68 cents) I have used for years as a benchmark of investor sentiment. They hold a large portfolio of micro and small cap public companies across various sectors worth almost $200 million. Approximately 70% is weighted toward base and precious metals and 15% uranium and other specialty metals and minerals.

This five-year chart on Pinetree sums it up very well – we are currently back to the devastating lows hit in Q4/08 following the global economic collapse.
At that point, the level of pessimism hit an all-time low and the discussions centered on the 1930’s depression. The difference today, the Dow is near a five-year high and it is only the small, higher risk companies that are being subjected to these incredibly low valuation levels.
Junior golds collapse to $29 per gold ounce
To back this “post economic collapse” valuation scenario, we can also take a look at the junior gold stocks. I track 50 with a minimum one million ounces (43-101 compliant) and have been doing so since I noticed cracks in the foundation March 2011.
I use this to try and benchmark fair value for the sector overall, but also when researching individual companies and trying to determine their growth potential and risks. View my comments below on Victoria Gold and you will understand why this is important.
As the following chart will show, we hit what appeared to be a low in June 2012. At that time, we were all devastated that valuations could have fallen to these levels.
That basket of junior golds hit $29 per ounce this past week!

Algorithmic traders helping destroy our market
Defined: http://en.wikipedia.org/wiki/Algorithmic_trading
In “normal” times issuing news was a positive event that both companies and shareholders looked forward to. Now it is a liquidity event. If news is moderate to good – it creates enough buying for shareholders to liquidate. (more)


Some have called it a trader's best friend: the trendline. But before you make your next trade, click here and learn how to recognize and profit from this very important technical indicator.

Alaska Air Group (ALK) is today's Chart of the Day and was found by sorting Barchart's New High list for frequency. Since the Trend Spotter gave a buy signal on 1/3 the stock is up 21.82%.  The price had a steady rise and hit 15 increases in the last 20 trading session plus its up 17.24% in the last month.

The Company is a holding company and has two principal subsidiaries: Alaska Airlines, Inc. and Horizon Air Industries, Inc. This year they will add 5 new routes and have 50 new Boeing planes on order with plenty of cash to fund the expansion.

Gold has been falling for 18 months now and shows no signs of reaching a bottom. Stock market volatility fell to extraordinary lows by one measure. Look for more of the same in both markets – downside moves in gold and a trading range in stocks.
Volatility Signals a Small Trading Range Ahead
Stocks entered last week oversold and continued to sell off on Monday and Tuesday morning. After rallying 2.2% from Tuesday's low, SPDR S&P 500 (NYSE: SPY) ended the week with a gain of 0.14%, reversing a loss of the exact same amount the week before. SPY has now closed at exactly $152.11 in two of the last three weeks. With small moves of 0.14% for two straight weeks, February ended as one of the least volatile months in stock market history.
The CBOE Volatility Index (VIX) is widely used to measure volatility and VIX is significantly below its long-term average values. The chart below, compressed to show the entire trading history of SPY, uses a different volatility indicator, the monthly average true range (ATR). ATR measures the distance from high to low (accounting for gaps) in a time period. The chart shows the value of the ATR divided by the closing price, expressing the trading range as a percent of the current price. This calculation makes indicator values comparable over time. Last month, this indicator fell to 3%.

This the 10th time this indicator has fallen to 3% since SPY began trading 240 months ago. In the past, these signals have been followed by a directionless market. One month after previous signals, SPY was higher five times and lower four times. The average market move in the month after the signal has been 0.3%, less than half the average move of 0.61% seen in all months.  (more)
Please bookmark us