kingworldnews.com / August 26, 2015
On a day when the Dow surged over 600 points, it’s important when looking at the intensity of the recent panic and chaos in global markets to take a look at the big picture, so today King World News is pleased to feature a piece from one of the greats in the business who did an amazing job of calling Monday’s rally off the extreme panic lows as well as today’s massive rally in stocks.
August 26 (King World News) – This was the note Jason Goepfert at SentimenTrader after Monday’s carnage in the stock market.  It has turned out to be incredibly accurate:  “Similar to Friday, there are many different extremes and different ways to look at the panic selling that has occurred. We’ve seen a type of panic that rarely occurs, and when it does the pattern is to see some testing of the panic open over the next 1-2 days then a rebound lasting several days, then perhaps another test of the panic low….
Continue reading the SentimenTrader piece below…
READ MORE
at 12:03 AM No comments: Links to this post 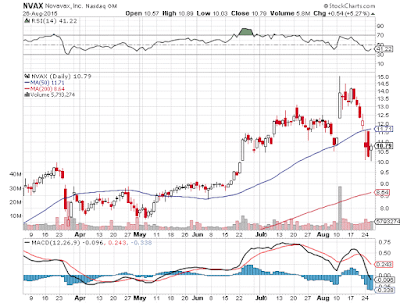 Biotech analysts at Piper Jaffray stated in a note on Wednesday that "we are buyers on weakness" of select biotech names that boast strong enough balance sheets to "make it through" upcoming value-driving events.
The analysts, led by Edward Tenthoff, singled out Vertex Pharmaceuticals Incorporated VRTX , Novavax, Inc. NVAX , Alnylam Pharmaceuticals, Inc. ALNY  along with Arrowhead Research Corp ARWR  being a smaller cap name.

Tenthoff noted that Vertex holds more than $1 billion in cash, while its total market cap stands at $29.2 billion. The analyst is expecting a "dramatic increase" in treatable cystic fibrosis patients with newly approved ORKAMBI, which will help drive revenue growth and a return to profitability in the near-term.

Tenthoff pointed out that shares of Novovax dipped 27.5 percent since August 17, but he has "increased confidence" in the company following positive Phase II data in its RSV-F in elderly subjects.
Novovax also ended the quarter with $315 million in cash, which can fund "at least one" pivotal RSV trial as the company plans to enroll 8-10,000 elderly subjects by year-end.

Shares of Alnylam lost 14 percent since August 17, trading at a $7.9 billion market cap, while the company ended the recent quarter with $1.4 billion in cash and expects to end the year with more than $1.2 billion.
According to the analyst, "all eyes" be on the patisiran and revusiran Phase II in OLE updates (expected in the fourth quarter), especially revusiran for familial amyloidotic cardiomyopathy (FAC) following three drop-outs due to rash/injection site reaction.

Finally, Arrowhead holds $112 million in cash at the end of the third quarter and trades at a $298 million market cap.
Arrowhead will update Phase IIa HEPARC 2001 data at an R&D Day in September, which will include single administration 3.0 and 4.0mg/kg ARC-520 cohorts. The analyst noted he is not anticipating deeper S-antigen suppression than has been seen to date; he ultimately believes repeat ARC-520 dosing will be required to achieve the goal of 1.0 log reduction to induce seroconversion. 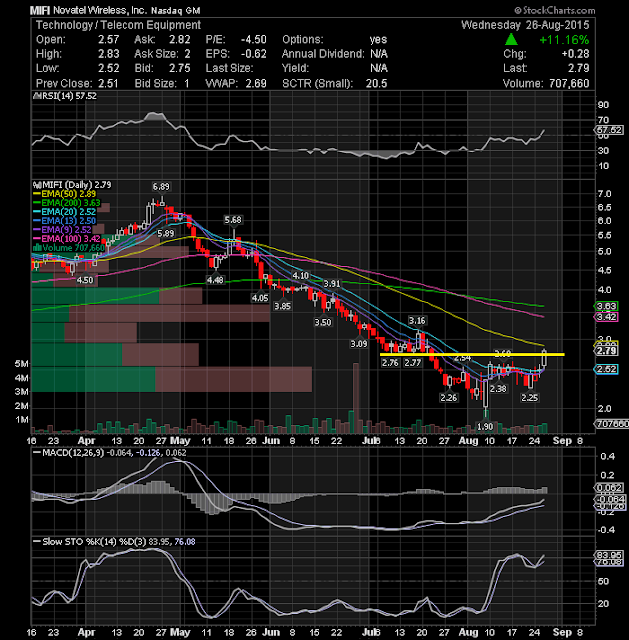 Novatel Wireless Inc (NASDAQ:MIFI) made a nice breakout today on volume. $2.89 is the next key level to watch on the upside. 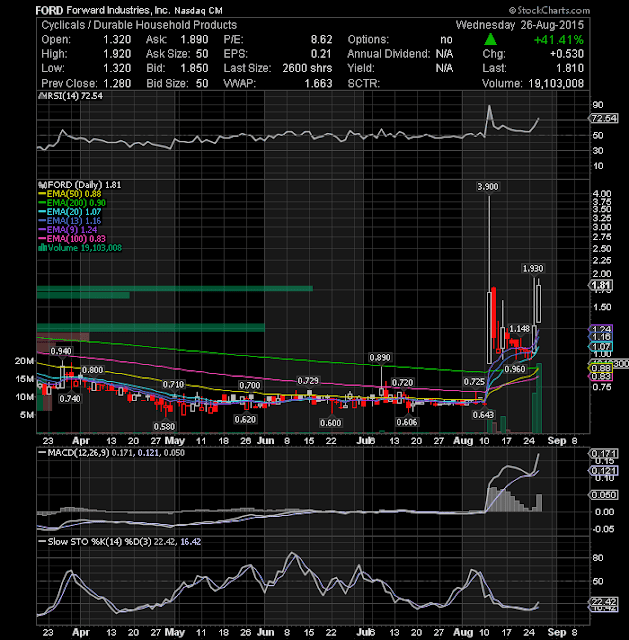 Forward Industries, Inc. (NASDAQ:FORD) Worth eyeing, poised to breakout. Look at the two big volume days. That is serious accumulation. 1.93 is pretty much the pivot here. If it breaks tomorrow, we could see +$3 quickly. 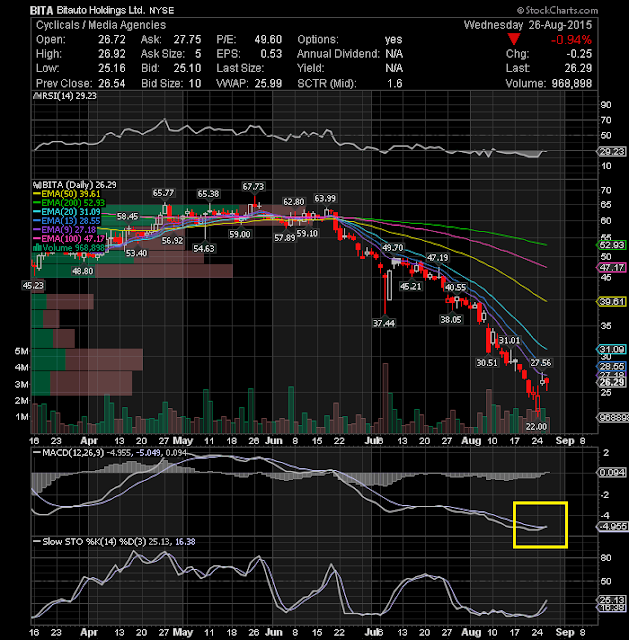 Bitauto Hldg Ltd (NYSE:BITA) Flagging here + MACD crossover. Looking to see if stock can get over $27.56 for nice bounce into 30's 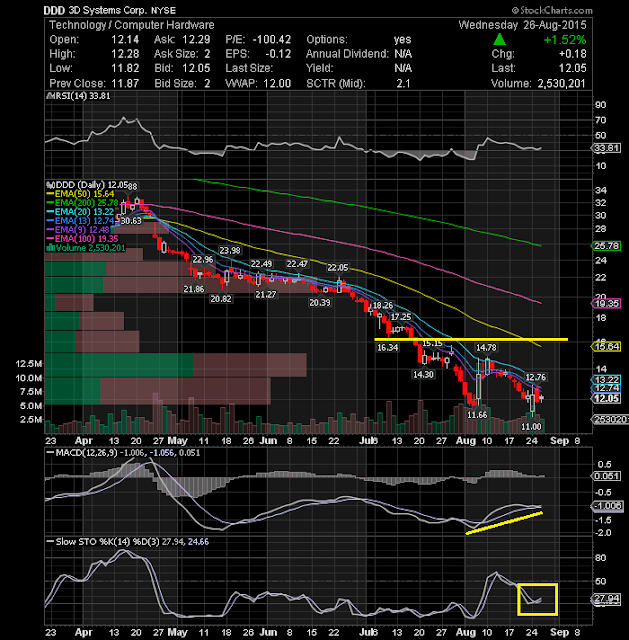 3D Systems Corporation (NYSE:DDD) still on high alert. Insiders are spending thousands of dollars ($615,584 / 47200 shares in August) to boost their stakes in the company. The bullish insider activity should indicate the stock is really worth buying. With a huge short interest any positive news could be a catalyst to move the stock up closer to $16.

Digital Realty Trust, Inc., a real estate investment trust (REIT), through its controlling interest in Digital Realty Trust, L.P., engages in the ownership, acquisition, development, redevelopment, and management of technology-related real estate. It focuses on strategically located properties containing applications and operations critical to the day-to-day operations of technology industry tenants and corporate enterprise datacenter users, including the information technology departments of Fortune 1000 companies, and financial services companies. As of December 31, 2008, Digital Realty’s portfolio consisted of 75 properties, including 62 located in North America and 13 located in Europe. Digital Realty Trust has elected to be treated as a REIT for federal income tax purposes and would not be subject to income tax, if it distributes at least 90% of its REIT taxable income to its stockholders.
Take a look at the 1-year chart of Digital (NYSE: DLR) with the added notations: After a nice rise back in January, but has since traded mostly sideways. During this sideways move, the stock found support at $62.00 (green). DLR has hit that support level a couple of times so far this year, and now the stock is testing that support once again. Traders could expect some sort of bounce, but if the $62.00 support were to break, lower prices should follow.

The Tale of the Tape: DLR has an important level of support at $62.00. A trader could enter a long position at $62.00 with a stop placed under the level. If the stock were to break below the support a short position could be entered instead.
at 12:03 AM No comments: Links to this post