“Soros Put” Rises To Record: Is The Billionaire Investor Betting On Market Crash?

zerohedge.com / by Tyler Durden / 08/15/2014 10:54
Back in February we observed, with some surprise, when Soros Fund Management, the investment vehicle of the famous Hungarian billionaire investor revealed in its Q4 13F that the firm had taken its bearish S&P 500 ETF – aka SPY – put exposure to a then record $1.3 billion notional, prompting us and many others to ask if Soros was preparing for a market crash. Fast forward to today when following the latest 13F disclosure from the same fund, we note, with double the surprise that a quarter after the same ETF put was lowered to “only” $299 million notional, Soros has once again increased his total SPY Put to a new record high of $2.2 billion, or nearly double the previous all time high, and a whopping 17% of his total AUM.
READ MORE
Please share this article
at 12:04 AM No comments: Links to this post

With major markets on the move, today KWN is sharing a warning from one of the legends in the business that we may be about to see a short squeeze of epic proportions that will shock market participants.
This will be an incredibly important development if this unfolds.  This is from legendary Art Cashin’s writings today:  Bond yields continue to move lower and astound most observers. In Europe,  the 10 year bund slipped below 1% and, if you wanted two year German bonds, you had to pay them for the privilege of holding your money.  Over here, there is growing buzz (at least among stock guys) that we are at risk of a massive short squeeze in bonds and bond derivatives.

Here’s part of a note that I sent to some friends yesterday morning:
READ MORE
Please share this article
at 12:03 AM No comments: Links to this post

The Dow Jones faces a major decision point into a known resistance cluster – monitor what happens here closely.
Let’s take a quick look at the key level and plan accordingly: 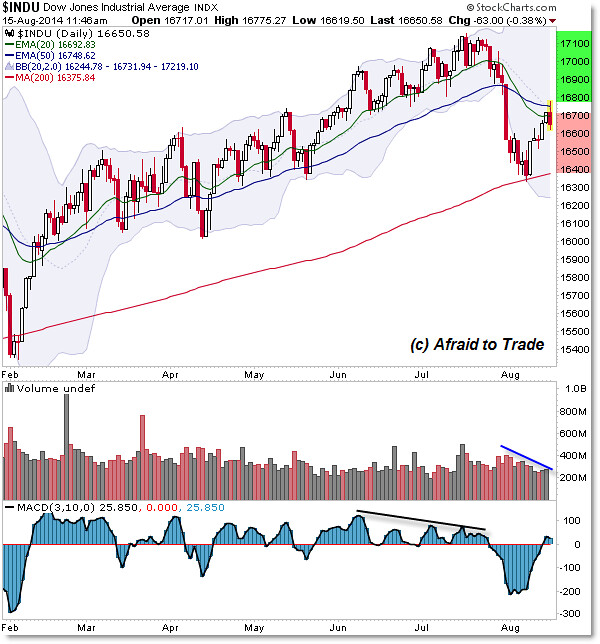 The 20/50 EMA cluster overlaps the 16,750 area in the Dow Jones Industrial Index.
Contrast this with the breakout yesterday in the S&P 500 .
There’s a bit of disconnect – at least on the price chart – between the breakout for the S&P 500 (which could morph into a failed breakout or bull trap) and the reversal candle today that is developing into this cluster in the Dow Jones.
For now, we’ll note a downside retracement pathway for price back to the 16,400 area IF price continues to move down away from the resistance cluster.
Alternately, we’ll note a Bullish Breakout Pathway – similar to the S&P 500 – should buyers push the index back above the 16,800 level and into the clear “Open Air Pocket.”  If so, 17,100 and beyond (similar to 1,990/2,000 in the S&P 500) would become the tradeable target.Please share this article
at 12:03 AM No comments: Links to this post

What’s the Downside in Corn Prices?

This week the USDA provided its latest estimate of the corn yield and resulting crop size. The USDA is using a 167 bushel per acre national average yield. This is above trend line yield (165) and also record high. With planted and harvested acreage left unchanged, this yield will result in a record large crop pegged at 14.032 billion bushels. Corn used for feed, ethanol and exports were all increased slightly from projections last month. This left ending stock projections nearly unchanged from last month at a hefty 1.8 billion bushels. Barring an early frost in the northern Corn Belt, it would appear that the era of tight corn stocks is now behind us. This makes two record large crops back to back.
World corn projected ending stocks remain at very high levels, approaching 190 million metric tons. These levels have not been seen in corn since the 1998-2000 timeframe. At that time corn prices were much lower than today, but overall corn usage was lower, as well. The advent of the ethanol industry has helped to put a price floor under the corn market, or so it seems.

The action in corn futures this week is suggestive that prices may be forming a bottom.(more)Please share this article
at 12:03 AM No comments: Links to this post

A year ago, there were many predictions that the majority of mediocre junior exploration companies would de-list or die off. Observers at the time noted that companies simply did not have enough cash left to create much shareholder value.
It was also apparent that very few of these same companies would be able to raise money in the future in any meaningful way, even to just keep the lights on.
Looking at the data we have today, it’s clear we’ve reached a new level of separation between the wheat and the chaff. While it took longer than expected, this “Great Divide” makes it obvious as to which companies should be avoided by retail investors. In addition, it also helps shed light on the real companies that have a chance at locating the next monster deposit.