Is This The Great Bond Market Crash Of 2010? 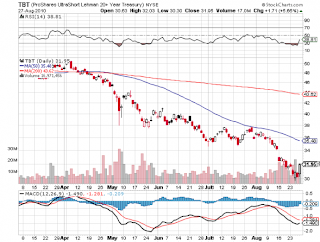 OK, maybe it hasn't really crashed yet. But the two day, 3 ½ point sell off in the futures for the 30 year Treasury bond (TBT), at the end of last week was the sharpest drop in 18 months. Winston Churchill's great 1942 quote, which marked the turning of the tide for Britain in WWII, comes to mind. "This is not the end. It is not even the beginning of the end. But it is, perhaps, the end of the beginning."

In my recent piece on the extreme overvaluation of government debt, I pointed out that the last time rates were this low, Treasury bonds brought in a miserly 1.9% yield for a decade (click here for the piece). Professor Jeremy Siegel at the Wharton School at the University of Pennsylvania has one upped me. After yields bottomed in 1956, bonds suffered negative returns for 30 years!

This should have occurred to me, as the first mortgage I took out on a Manhattan coop in 1982 carried an 18% interest rate. That was then Federal Reserve governor Paul Volcker was waging a holy war on inflation and eventually won. I took out one of the first ever floating rate mortgages, and by the time I sold it three years later, the rate had melted down to only 11%. I tell this story to kids buying their first starter homes now and they look at me like I'm some kind of dinosaur. (more)

Stocks, Commodities, Forex Review / Preview: Nowhere to Go but Up?

The main theme continues to be risk aversion in all markets, most obviously in global stocks and bonds.

Equities are continuing to show technical breakdown. US and European government bonds are showing no signs of breaking the strong long-term bull trend despite decade low rates. Most growth dependent commodities show a similar story, though copper gets a bit of a boost from slowdowns in Chilean mines.

The underlying cause is uncertainty about the continuity of the global economic recovery as most of its engines slow down. Europe faces a slowdown from the combined effects of austerity and future aid to nations struggling under debt burdens, and to their large bank creditors. Japan remains stuck in deflation. China is intentionally cooling its growth to avoid inflation. Every major indicator of US economic health points to a substantial slowdown in the second half of the year.

The only clear beneficiaries are safe-haven and currency-hedge assets: AAA bonds, gold, the JPY, CHF and to a lesser extent, the USD. (more) 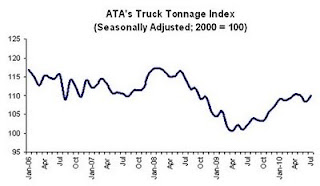 The American Trucking Associations’ advance seasonally adjusted (SA) For-Hire Truck Tonnage Index increased 1.5% in July, although June’s reduction was revised from 1.4% to 1.6%. The latest improvement raised the SA index from 108.3 (2000=100) in June to 110 in July. Compared with July 2009, SA tonnage climbed 7.4%, which matched June’s increase and was the eighth consecutive year-over-year gain (see chart above). Year-to-date, tonnage is up 6.7% compared with the same period in 2009.

ATA Chief Economist Bob Costello said that July’s data didn’t change his outlook for subdued tonnage growth in the months ahead, stating, “The economy is slowing and truck freight tonnage has essentially gone sideways since April 2010.” Nevertheless, Costello believes that tonnage will post moderate gains, on average, for the second half of the year. “After accounting for the reduction in supply over the last few years, even small gains in tonnage will have a larger impact on the industry than in past. (more)
at 12:19 AM No comments: Links to this post

"Monetary Shock and Awe": The Fed Prepared to Launch Most Radical Intervention in History

The equities markets are in disarray while the bond markets continue to surge. The avalanche of bad news has started to take its toll on investor sentiment. Barry Ritholtz's "The Big Picture" reports that the bears have taken the high-ground and bullishness has dropped to its lowest level since March ‘09 when the market did a quick about-face and began a year-long rally. Could it happen again? No one knows, but the mood has definitely darkened along with the data. There's no talk of green shoots any more, and even the deficit hawks have gone into hibernation. It feels like the calm before the storm, which is why all eyes were on Jackson Hole this morning where Fed chairman Ben Bernanke delivered his verdict on the state of the economy on Friday.

Wall Street was hoping the Fed would "go big" and promise another hefty dose of quantitative easing to push down long-term interest rates and jolt consumers out of their lethargy. But Bernanke provided few details choosing instead this vague commitment:

“The Committee is prepared to provide additional monetary accommodation through unconventional measures if it proves necessary, especially if the outlook were to deteriorate significantly." (more)
at 12:19 AM No comments: Links to this post

Miners On Verge of Breakout: Mergers and Acquisitions Heating Up The Sector 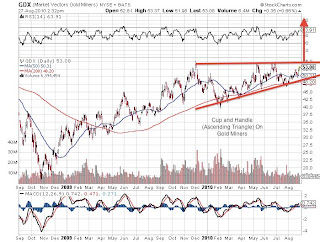 The global debt crisis and the war on deflation by the Federal Reserve is causing more producers to find ways to invest their cash. This low interest rate environment which may continue for some time will force producers whom are sitting on large cash positions to acquire more reserves. Mergers and acquisitions in the mining sector have increased over this past year due to a lack of major discoveries as well as supply and demand changes in emerging economies.

We have seen a trend of investments from Asia to purchase stakes in mining companies. In 2009 the Chinese Investment Corporation, a state owned company, took large ownership positions in Teck Cominco and Penn West Energy Trust. Recently in June, China National Nuclear signed a contract with Cameco to supply 23 million pounds of uranium. Hanlong Investments took a large stake in General Moly, one of the leading North American molybdenum developers. Korea Electric Power signed a deal with Denison Mines another uranium developer. Sojitz bought a 25% interest in the Taseko’s Gibraltar Copper Mine. Then recently we saw BHP Billiton trying to make a deal with Potash Corp. and Kinross, a large producer buying Redback, an exploration company. This trend should continue through 2011.

Its Official: China is Unloading its Treasury Bonds 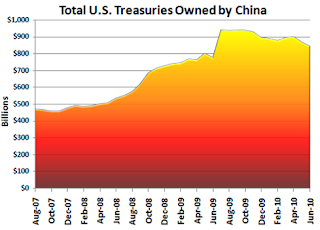 It looks like the smart money these days is found in China. While American investors have been scrambling over each other to buy more Treasury bonds at historically low yields, China has begun quietly unloading some of its own enormous holdings. In June, the Middle Kingdom sold $21.2 billion of paper, reducing its net long to $839.7 billion. This is little more than 10% of the total $8.18 trillion in federal debt that Uncle Sam has outstanding.

Total foreign ownership of US Treasury bonds amounts to $4 trillion, up from $2.4 trillion in three years. Instead, the Chinese have been buying Japanese government bonds, which today carry a paltry 0.9% yield, but have the merit that they are denominated in a rapidly appreciating currency. The Mandarins in Beijing have also been picking up a variety of bonds in Europe which have seen yields pushed to near records, thanks to the debt crisis there.

Officials at the People's Bank of China say that it is all part of a broader diversification effort away from the greenback. PIMCO's Bill Gross has apparently been taking Mandarin lessons on the sly because he has also been paring back his own massive holdings in longer dated Treasuries. To understand why, take a look at the chart below of the spread between the Dow dividend yield and the ten year Treasury yield which has turned positive for the first time since 1955. (more) 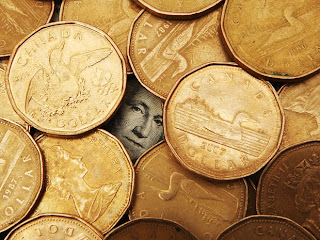 If the Fed pursues another round of quantitative easing, the Canadian dollar may be the big winner. The loonie has tended to perform fairly well following previous QE episodes, according to Barclays strategist Paul Robinson.

“In our view, this is likely to be the case once again, but the larger the monetary stimulus the more that it may benefit,” he said in a report.

If this is done relatively soon and in relatively large size, Mr. Robinson believes QE could produce a more positive response this time around, particularly given the success authorities had in limiting the severity of the recession in 2008-2009.

“The more successful QE is deemed to be, the lower U.S. interest rates will be, the higher the inflationary pressures around the world and the more growth will be supported,” the strategist said. “Canada seems to be perfectly placed to benefit from all of these factors.” (more) 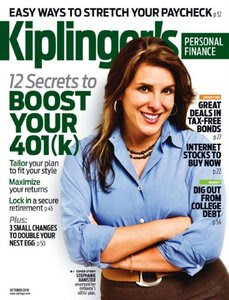 Kiplinger's Personal Finance was written to help you do a better job of managing your personal and family financial affairs and to help you get more for your money. You get ideas on saving, investing, cutting taxes, making major purchases, advancing your career, buying a home, paying for education, health care and travel, plus much, much more.

read more here
at 12:10 AM No comments: Links to this post

Analyst: Citigroup Is Cooking the Books 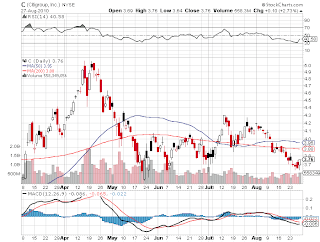 An all-out war has broken out between Citigroup CEO Vikram Pandit and a prominent securities analyst who is saying that the big bank may be cooking the books by inflating its earnings through an accounting gimmick, FOX Business Network has learned.

The analyst, Mike Mayo, of the securities firm CLSA, has been telling investors that Citigroup (C: 3.75 ,0.00 ,0.00%) should take a writedown, or a loss on some $50 billion of “deferred-tax assets,” or DTAs. That is a tax credit the firm has on its financial statement that Mayo says is inflating profits at the big bank by as much as $10 billion.

For that critique, Mayo has been denied one-on-one meetings with top players of the firm, including CEO Vikram Pandit, Chief Financial Officer John Gerspach, and any other member of management, while other analysts enjoy full access to the bank’s top executives, FBN has learned.

In fact, Mayo hasn’t had a meeting with Pandit or anyone in Citigroup management since around the time of the financial crisis, in the fall of 2008, when Citigroup was on the verge of extinction and needed an unprecedented series of government bailouts to survive. (more)

US Economic Calendar For the Week