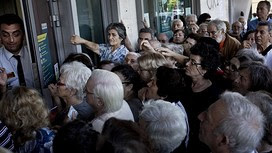 Greek banks are preparing contingency plans for a possible “bail-in” of depositors amid fears the country is heading for financial collapse, bankers and businesspeople with knowledge of the measures said on Friday.
The plans, which call for a “haircut” of at least 30 per cent on deposits above €8,000, sketch out an increasingly likely scenario for at least one bank, the sources said.
A Greek bail-in could resemble the rescue plan agreed by Cyprus in 2013, when customers’ funds were seized to shore up the banks, with a haircut imposed on uninsured deposits over €100,000.  (more)

Alasdair Macleod There Will Be a NEW WORLD Monday Morning! 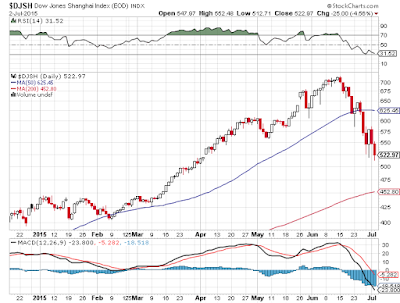 Chinese stocks tumbled again on Friday, taking the week's losses to more than 10 percent, as the securities regulator said it was investigating suspected market manipulation and announced a slew of measures aimed at heading off a full-blown crash.

After a slump of nearly 30 percent in Chinese stocks since mid-June, the China Securities Regulatory Commission (CSRC) has set up a team to look at "clues of illegal manipulation across markets".
After market close, a CSRC spokesman said China would cut initial public offerings and capital raisings and support long-term investors entering the market to help stabilize prices.  (more)

Adrian Day’s Embarrassment of Riches: Gold Companies Cheap to Buy but Not for Long

Fund Manager Adrian Day believes that the U.S. dollar is fundamentally overvalued and we can expect a devaluation at some point. This is good news for the price of gold. In this interview with The Gold Report, Day adds the even-better news for investors in gold equities is that so many good shares now sell for so little, and he discusses several companies that won’t remain bargains for long.
The Gold Report: Despite the lack of an economic recovery and the reality of ever-increasing debt, the U.S. dollar and the equity markets remain strong, while gold (as denominated in U.S. funds) remains weak. Do you expect these conditions to change?
Adrian Day: Yes, absolutely. The strong dollar and equity markets are two of the main reasons why gold has been down over the last 18 months. The third reason is anticipated higher interest rates.
Continue Reading at TheAuReport.com…

Yesterday over coffee, a friend of mine leaked the news that JP Morgan’s private banking division here in Singapore is going to start charging negative interest rates.
I almost fell out of my chair.
He’s a successful hedge fund manager and one of their best customers. So when he received the notice, he rang up his private banker and demanded to know why. (more)