Silver Will Be in a Severe Supply Shortage by August 2012

Placing my a** hat on the table in front of me, I predict that silver will go into a severe supply shortage by August 2012 or sooner.

Greek sort of got bailed out, leaving the price of silver to float upwards as opposed to downward should central banks and private owners need to dump PMs to get liquidity. Absorption of silver continues apace with speculative and aggressive longs outnumbering shorts two to one.
The discount to real silver value will not go unnoticed for long. Sovereign wealth funds in China and Middle East have over $2 trillion in funds ready to deploy. War brings out the best in wealthy buyers. They buy for safety when the chips are down and financial insecurity abounds.

If the Economy’s “Recovering,” Why is the Largest-Ever U.S. City Bankruptcy on the Horizon? 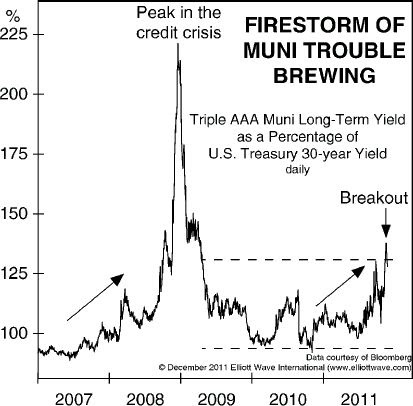 Bloomberg reports (2/25) that it costs the city $175,000 just to get a consulting firm’s fiscal evaluation. Management Partners issued a report which said:

…the city took on a large amount of debt in anticipation of ongoing growth that now exceeds the city’s ability to pay.

Stockton also has one of the nation’s highest home foreclosure rates and has been called “Foreclosureville USA.”

And Moody’s just downgraded Stockton’s rating to Ba2, which is two levels below investment grade.

In the same Bloomberg article, the California State Treasurer said “The reputational stain can bleed onto other local issuers and the state, and that can hurt taxpayers in the bond market.”

John Williams just warned that the ongoing financial problems have horrendous implications for the markets and systemic stability. Williams, who founded ShadowStats, also noted that U6 unemployment levels are not being reported by the mainstream media and they are at staggering levels. Here is what Williams had to say about the situation: “The outlook for the broad economy remains bleak, despite relatively upbeat February payroll data. Deterioration in the January trade deficit and related revisions suggest negative impact on first-quarter 2012 GDP reporting, along with increasing downside pressure on the U.S. dollar from underlying economic and political fundamentals.”

This Pizza Company Could Create a Double-Digit Return

Some traders shy away from stocks that have just hit an all-time new high. Personally, I am attracted to these stocks. They frequently represent low-risk/high-reward trading opportunities.

Stocks hitting new highs often continue to advance because there isn't any technical resistance in sight. That's why I'm excited about today's trade.

After announcing strong fourth-quarter and full-year results on February 28th, shares of Domino's Pizza (NYSE: DPZ) shot up 14%, hitting an all-time high, near $40. In the process, the stock broke out of a multi-month holding pattern and formed a highly bullish flag formation. The stock has recently broken out of the top end ("flagpole") of a flag formation -- and has hit a series of new highs.

Fueling Domino's growth is a change in its dough and sauce recipes, followed by an aggressive advertising campaign that promises "better tasting pizza." Domino's has also improved its online ordering system, while maintaining competitive prices.

Also driving sales is the company's growing store numbers. Currently, Dominos operates nearly ten thousand franchised and company-owned stores in the U.S. The pizza retailer also operates in over 70 countries worldwide. Despite this strong international presence, it sees further international expansion as a primary driver of future growth. The company plans to open between 350 and 450 stores in coming years, up from previous projections of 250 to 300 units. Given that Domino's will franchise many of these stores, operating and start-up costs should be kept to a minimum, but corporate profits will likely rise.

Traders appear to favor the company's plans. Shares are on a tear and show no sign of slowing down.

As the daily chart shows, from mid-October through late February Domino's traded in a rectangular range between support, near $30.30 and resistance around $35.30. During most of February, the stock hovered around the flat 50-day moving average, which intersected near $33.

However, upon announcing stellar fourth-quarter and full-year results on February 28th, the stock gapped up from its 50-day moving average, bullishly breaking the multi-month rectangular holding pattern.

In a single day, shares skyrocketed nearly $5.40, on very heavy volume, creating a large bullish candle. This candle marked the "flag pole" of a highly bullish technical pattern known as a flag formation. The flag's pennant formed over the ensuing trading days, as the stock cooled and consolidated around the $38 range.

Flag formations usually resolve bullishly. Shares now appear to be heating up and are re-testing their recent all-time $39.92 high. A small shelf of resistance has formed here; however, if the stock can break out past this level, it could go much higher.

The bullish technical outlook is supported by strong fundamentals.

Fourth-quarter revenue rose 4.5% to $501.7 million, from $480 million in the year-earlier period. The increase was driven by strong pizza demand in the domestic and internationals markets.

For the full 2012 year, the pizza chain expects domestic same-store sales will increase 1% to 3%, with international comps projected to rise 3% to 6%.

Due to same-store-sales and margin expansion, fourth-quarter earnings rose 30% to $0.52, from $0.40 in the comparable year-ago quarter.

Given this bullish fundamental outlook, supported by currently bullish techincals, I plan to go long on the pizza company.

Risks to consider: Domino's stock appears to be completing a highly bullish technical pattern known as a flag formation. Flags typically present explosive short-term trading opportunities. However, if the stock cannot decisively break out of the pattern in a 15 to-20 trading period, the flag formation could fail. Traders then risk buying the stock at the top of an all-time high.

As such, I will place a buy-on-stop order at $40.01, just above current resistance and the psychological resistance mark of $40. This means if the stock does not hit or go above $40.01, I will not enter a position.

If DPZ can penetrate $40, I think it should move to the mid-$40's and am setting a target of $47.31. My stop-loss is $33.99, which would represent a break below support and the current intersection of the 50-day moving average.At current levels, the risk reward ratio is 1.36:1.


Bob Chapman - Hard Money Watch - March 11, 2012 : Greece just bought some more time , they should have allowed Greece to go bankrupt three ago , Europe is doomed says Bob Chapman it is only a matter of time before all of the countries go down.