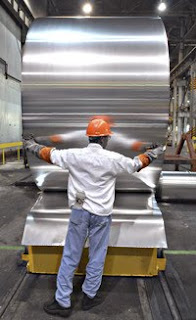 Bloomberg,
For the first time in more than a year analysts are cutting their forecasts for Standard & Poor’s 500 Index earnings, jeopardizing gains from the biggest September rally since World War II.

Estimates for S&P 500 companies’ combined 2011 profit fell as low as $95.17 last month from an August high of $96.16 and posted the first quarterly reduction since the three months ended June 2009, according to more than 8,500 analyst forecasts tracked by Bloomberg. The revision came as the benchmark gauge for U.S. equities rose 8.8 percent last month, the largest September advance since 1939.

Now, money managers at Stifel Nicolaus & Co. and USAA Investment Management Co. are preparing for weaker returns in October as Alcoa Inc.’s Oct. 7 report starts the third-quarter earnings season. Bulls say even with the decline in analyst estimates, equities remain cheaper based on forecast profits than at any time since 1988, excluding the six months after Lehman Brothers Holdings Inc.’s bankruptcy in 2008. (more)
DOW JONES NEVER LOSS TRADE. CLICK HERE.
at 12:23 AM No comments: 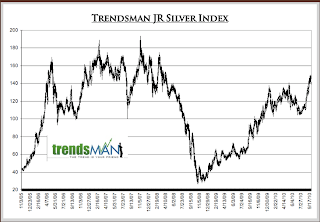 There is value to be had in the silver juniors
Below is a chart of our Junior Silver Index, which contains 10 stocks. Today, Silver (SLV) closed above $22, slightly above its 2008 high. The cost of Oil is well below where it was when the silver stocks last peaked. Yet, the junior silver stocks are roughly 25% below their highs. In terms of real value, in a fair world, the junior index would be trading ABOVE its 2007-2008 highs.

Distressed Homes Sell at 26% Discount in U.S. as Supply Swells

Homes in the foreclosure process sold at an average 26 percent discount in the second quarter as almost one-fourth of all U.S. transactions involved properties in some stage of mortgage distress, according to RealtyTrac Inc.

A total of 248,534 homes that sold in the period had received a default or auction notice or been seized by banks, RealtyTrac said in a report today. The number was up 5 percent from the first quarter and down 20 percent from a year earlier, according to the Irvine, California-based data seller.

“We’re still clearly building up more distressed inventory,” Rick Sharga, RealtyTrac’s senior vice president, said in a telephone interview. “That will either put downward pressure on prices or keep them from going up.”

The discount reflects the average sales price of homes in the foreclosure process compared with properties not in distress, according to RealtyTrac. About 24 percent of all homes sold were in some stage of foreclosure, down from 31 percent in the first quarter. The average price of a distressed property was $174,198, up from $171,971, the company said. (more)
at 12:17 AM No comments:

IMF admits that the West is stuck in near depression

The IMF report – "Will It Hurt? Macroeconomic Effects of Fiscal Consolidation" – implicitly argues that austerity will do more damage than so far admitted.

Normally, tightening of 1pc of GDP in one country leads to a 0.5pc loss of growth after two years. It is another story when half the globe is in trouble and tightening in lockstep. Lost growth would be double if interest rates are already zero, and if everybody cuts spending at once.

"Not all countries can reduce the value of their currency and increase net exports at the same time," it said. Nobel economist Joe Stiglitz goes further, warning that damn may break altogether in parts of Europe, setting off a "death spiral".

"A fall in the value of the currency plays a key role in softening the impact. The result is consistent with standard Mundell-Fleming theory that fiscal multipliers are larger in economies with fixed exchange rate regimes." Exactly. (more)
at 12:16 AM No comments:

Rampant Inflation In 2011? The Monetary Base Is Exploding, Commodity Prices Are Skyrocketing And The Fed Wants To Print Lots More Money 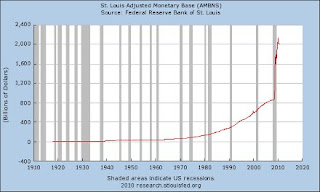 Are you ready for rampant inflation? Well, unfortunately it looks like it might be headed our way. The U.S. monetary base has absolutely exploded over the last couple of years, and all that money is starting to filter through into the hands of consumers. Commodity prices are absolutely skyrocketing, and it is inevitable that those price increases will show up in our stores at some point soon. The U.S. dollar has already been slipping substantially, and now there is every indication that the Fed is hungry to start printing even more money. All of these things are going to cause a rise in inflation. Not that we aren't already seeing inflation in many sectors of the economy. Airline fares for the holiday season are up 20 to 30 percent above last year's rates. Double-digit increases in health insurance premiums are being reported from coast to coast. The price of food has been quietly sneaking up even at places like Wal-Mart. Meanwhile the U.S. government insists that the rate of inflation is close to zero. Anyone who actually believes the government inflation numbers is living in a fantasy world. The U.S. government has been openly manipulating official inflation numbers for several decades now. But we really haven't seen anything yet. As increasingly larger amounts of paper money are dumped into the economy, we are eventually going to see the worst inflation in American history. The only real question is how far down the road are we going to get before it happens.

Take a few moments and digest the chart below. It shows just how dramatically the U.S. monetary base has been expanded recently.... (more)
at 12:14 AM No comments: 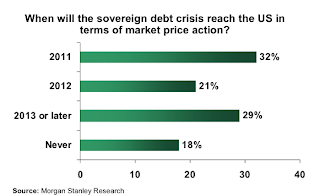 Earlier we mentioned a survey of 150 clients undertaken by Morgan Stanley, and noted that by and large their opinions reflected what's happening in the market today.

So for example they like gold, emerging markets, and they think bond yields will stay somewhere between 2% and 3%.

But this result stood out. Contrary to what rates would suggest -- that the US is a steller credit -- more than 50% of respondents see the sovereign debt crisis coming to the US by 2012. Almost nobody thinks the US can go unscathed. (more) 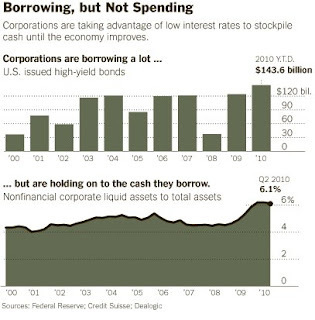 As many households and small businesses are being turned away by bank loan officers, large corporations are borrowing vast sums of money for next to nothing — simply because they can.

Companies like Microsoft are raising billions of dollars by issuing bonds at ultra-low interest rates, but few of them are actually spending the money on new factories, equipment or jobs. Instead, they are stockpiling the cash until the economy improves.

This situation underscores the limits of Washington policy makers’ power to stimulate the economy. The Federal Reserve has held official interest rates near zero for almost two years, which allows corporations to sell bonds with only slightly higher returns — even below 1 percent. But most companies are not doing what the easy monetary policy was intended to get them to do: invest and create jobs. (more)
at 12:11 AM No comments:

15 Things You Shouldn’t Be Paying For 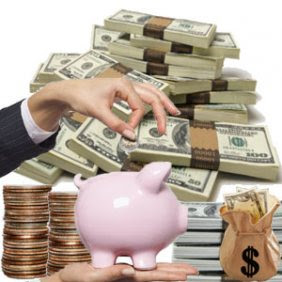 Want to save money? Here are 15 ways to save with the help of Phil Taylor

Basic Computer Software — Thinking of purchasing a new computer? Think twice before you fork over the funds for a bunch of extra software. There are some great alternatives to the name brand software programs. The most notable is OpenOffice, the open-source alternative to those other guys. It’s completely free and files can be exported in compatible formats.

Cell Phone – The service plan may be expensive, but the phone itself doesn’t have to cost a thing. Most major carriers will give you a free phone, even a free smart phone, with a two-year contract. (more)
at 12:09 AM No comments: 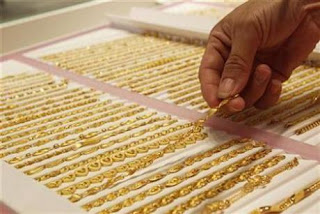 (Reuters) - The world's wealthiest people have responded to economic worries by buying gold by the bar -- and sometimes by the ton -- and by moving assets out of the financial system, bankers catering to the very rich said on Monday.

Fears of a double-dip downturn have boosted the appetite for physical bullion as well as for mining company shares and exchange-traded funds, UBS executive Josef Stadler told the Reuters Global Private Banking Summit.

"They don't only buy ETFs or futures; they buy physical gold," said Stadler, who runs the Swiss bank's services for clients with assets of at least $50 million to invest.

UBS is recommending top-tier clients hold 7-10 percent of their assets in precious metals like gold, which is on course for its tenth consecutive yearly gain and traded at around $1,314.50 an ounce on Monday, near the record level reached last week.

"We had a clear example of a couple buying over a ton of gold ... and carrying it to another place," Stadler said. At today's prices, that shipment would be worth about $42 million. (more)
DOW JONES NEVER LOSS TRADE. CLICK HERE.
at 12:08 AM No comments:

“Maybe this is like shock therapy. Maybe this will actually get the lenders to the table and encourage them to work out deals that are to the benefit of everybody.” --Economist Karl E. Case, quoted in the New York Times

The hits are coming fast and furiously. Major Wall Street mortgage lenders could soon be falling like dominos – and looking again for handouts.

On September 20th, Ally Financial Inc., which owns GMAC Mortgage, the nation’s 4th largest lender, halted evictions and resale of repossessed homes in 23 states. This was after a document processor for the company admitted that he had signed off on 10,000 pieces of foreclosure paperwork a month without reading them. The 23 states were all those where foreclosures must be approved by a court, including New York, New Jersey, Connecticut, Florida and Illinois.

On September 24, Representatives Alan Grayson (D-FL), Barney Frank (D- MA) and Corrine Brown (D-FL) directed a letter to Fannie Mae questioning its use of “foreclosure mills,” which were described as “law firms representing lenders that specialize in speeding up the foreclose process, often without regard to process, substance or legal propriety.” The letter followed a report by the Florida attorney general’s office in August that it was investigating three law firms that had allegedly fabricated documents in thousands of cases to obtain final judgments of foreclosure.

On September 24, California attorney general Jerry Brown asked GMAC to halt foreclosures in his state until the lender could prove it was complying with a law that prohibits lenders from taking steps to foreclose a home before making an effort to work with the borrower. California is a non-judicial foreclosure state, meaning foreclosures do not require the prior approval of a court. (more)
at 12:05 AM No comments: