Overdose: The Next Financial Crisis

One of the greatest failed predictions over the last few years has been that the Fed’s massive monetary stimulus would result in runaway hyperinflation. Certainly we can debate whether the official consumer price index is artificially lower than what reality would suggest, but it's clear current U.S. inflation is nowhere near levels of hyperinflation and has actually been trending lower over the past two years as deflationary trends persist, in spite of the Fed’s best efforts to the contrary.
So how is it that the Fed can create all this money and not create inflation? Martin Armstrong, who has long criticized calls for hyperinflation or even high inflation in the U.S., said one of the main reasons is because the U.S. dollar is the global reserve currency.
(more)
Please share this article
at 12:05 AM No comments: Links to this post

While CFTC Commitment of Traders report tends to be very useful, some of the date in the report can be strange from time to time. One of these strange occurrences is the divergence between positioning in Nymex Crude Oil futures and Nymex Heating Oil futures.
The reason I tend to follow Heating Oil COT, is because Heating Oil correlates very closely to Brent Crude (global barometer of oil prices) and the COT report of hedge fund positioning does a good job of giving contrarian buy and sell signals.
Chart 1: Brent Crude Oil together with Heating Oil COT report 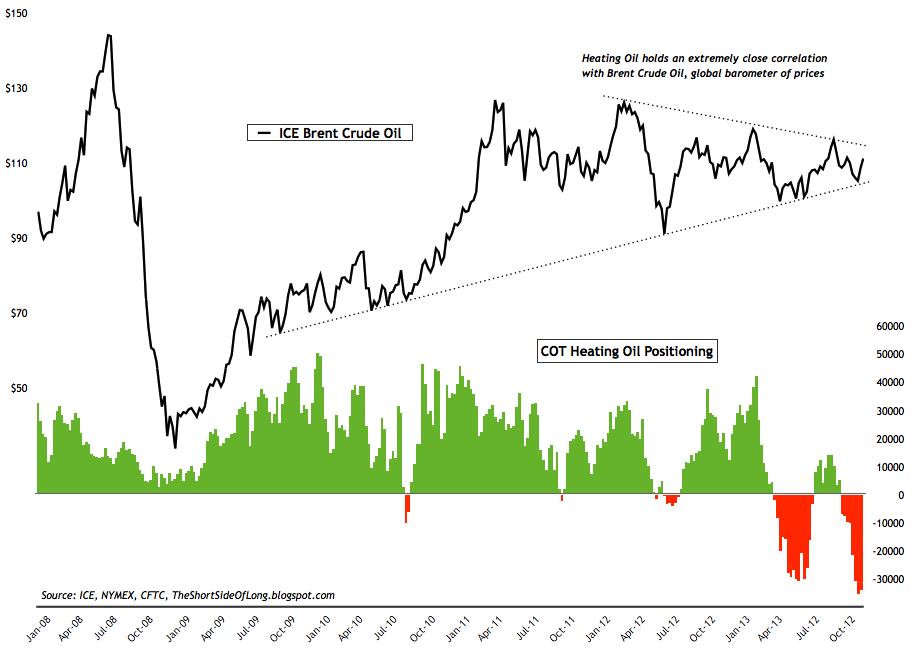 Source: Short Side of Long
The chart above of Heating Oil COT, shows how reduced net long positions or even outright net short positions tend to be good signals for buy opportunities when it comes to Brent Crude. The current positioning is one of the most extreme in decades (confirming very low Public Opinion sentiment). What does this tell us about the current consolidation triangle setup in Brent Crude prices?
Please share this article
at 12:05 AM No comments: Links to this post

Crude Down, Refiners Up?

I’ve been noticing this disconnect between oil & gas refining and marketing stocks over the past few weeks but in didn’t seem so “in my face” until tonight. I think it had to do with so few results on my screeners tonight due to my volume requirement that they stood out, but this is just odd how this sector is performing so well with crude being under pressure as of late. I won’t be placing any trades in this sector as these chart patterns don’t fit the ones I trade, but I thought I’d point it out.
learn about the the crack spread en.wikipedia.org/wiki/Crack_spr…

Porter Stansberry: The madness of the crowd cannot sustain this rally

I see two critical phenomena taking place in the market right now... And I hope people will pay attention to them.

No. 1, the retail investor has returned to the stock market in a huge way. If you look at mutual-fund inflows, they're very powerful. In October, U.S. equity funds had net inflows of $10.5 billion, the highest monthly inflow since January. These inflows are the biggest influx we've seen into stocks since 2007.

Unfortunately, I believe the retail investor is late to the party. Too much money is going into stocks right now at too high of a price. This is not the time to be buying stocks. You want to be buying stocks when other people are selling them, not when everyone in the world is buying them.
I sincerely thought the market top was being made in early June and in May when the junk bonds peaked and yields fell to less than 5%. I've been early on that call. Nevertheless, I don't think it's going to end well for the retail investor.  (more)

Why Canadian homes are more unaffordable than ever

Low interest rates are a form of economic junk food.

It’s true in the housing market, where low rates have glossed over a striking decline in affordability in the past two decades. A sustainably strong housing market is based on fundamentals like a reasonable match between growth in incomes and home prices, not the economic equivalent of fat and salt.

Most of us have at least a basic idea of how much house prices have gone up in recent years, but there’s been a lack of curiosity about how buyers are keeping up. For some perspective, let’s look at incomes as taken from Statistics Canada data on weekly earnings going back to 1997, and real estate price data supplied by the Canadian Real Estate Association.

A reasonable long-term assumption is that houses will rise in price by the inflation rate every year on average, and that wages will more or less keep up with inflation. That would give us a kind of affordability equilibrium in the housing market.

The surge in housing prices is the great gift of the global financial crisis five years ago. The crisis drove interest rates down to historic lows, thereby allowing buyers to shrug off a growing disparity between their incomes and the cost of buying a house. The availability of 30-, 35- and even 40-year mortgages a few years back also helped obscure the income-house price gap.

But rates have been the big stimulus for the housing market. The prime lending rate at banks and credit unions – it’s used to price variable-rate mortgages – fell as low as 2.25 per cent from 6.25 per cent in mid-2007 before edging back up to the current level of 3 per cent. The average posted rate for five-year fixed-rate mortgages fell to 5.14 per cent at mid-year from 7.24 per cent in 2007.

You can chop roughly 1.5 percentage points off those five-year fixed rates to get the discounted costs that borrowers typically pay. On a $400,000 mortgage, the decline in these discounted rates over the past five years would have saved a buyer about $470 per month.

That’s what kept houses affordable while prices left income growth behind. Can we keep living this way? A lot depends on interest rates. The Organization For Economic Co-operation and Development said last week that Canada may need to start pushing up rates next year, and that our central bank’s benchmark rate may need to more than double by the end of 2015.

But that almost certainly won’t happen. BMO Nesbitt Burns has interpreted the Bank of Canada’s latest words on rates to suggest that the status quo will rule for at least another year. So we’re good on housing, right?

Low rates were needed to stabilize the economy back in the financial crisis, and they may still be required. But let’s recognize that they’re having an unhealthy effect on housing by getting people into homes that are going to be tough to manage financially.

At some point in the next couple of years, the economy is going to surprise us on the positive side. Anyone who buys a house now or bought in the past two years or less has virtually no chance of avoiding a sizable rate increase at renewal, and that means a higher cost of living.

A more enduring foundation for affordable housing is a match between incomes and house prices. It’s sometimes said that a house should ideally cost three times your annual salary. That’s laughably out of date, so let’s say three times your household income.
With two average wage earners in a household, the ratio of price to income falls to 3.9 from 7.8. If that seems okay to you, consider that house prices in October rose 8 per cent over the same month a year earlier on a national basis. Anyone get an 8 per cent raise lately?