In June, bonds held support right around 115. This level represents the key 61.8% retracement of last year’s epic bond rally. This is a daily candlestick chart of $TLT bouncing from this level and running into what I think is a really important level. This is essentially why I think we don’t touch bonds here now that this short-term upside target of ours has been hit. 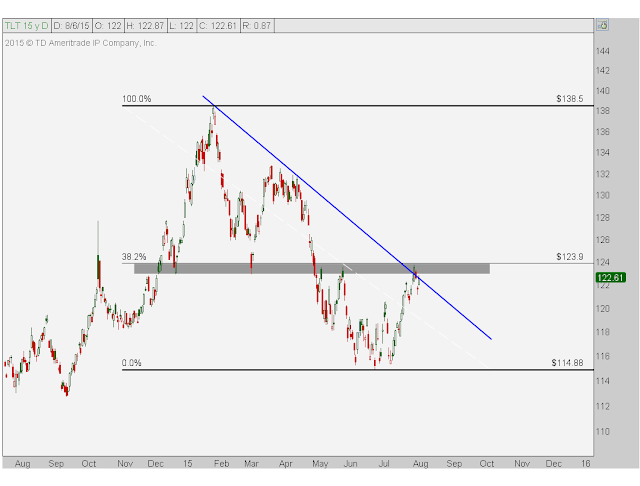 I’m not saying that we never want to touch it again. I’m just suggesting that we stay disciplined and wait for more data before making any more aggressive decisions. The $123-$124 level is purposely shaded in gray for 3 main reasons:
1) This is the downtrend line from the all-time highs in late January
2) This was support in December, support again in March and then resistance since May. The market clearly has memory here because so many shares have exchanged hands at this price
3) This level represents the 38.2% Fibonacci retracement of the entire correction in the first half of 2015.
All of these suggest fading this level, at least temporarily. It was our tactical target for a reason. But now we wait. I think if prices can start trading in the $124s-$125s, the market is telling us that rates are likely to get slammed. If we struggle up here and roll over, I would argue that would be a positive for interest rates and economists will finally have their day!
I don’t have a horse in the race right now, but gun to my head, I think the former is the higher probability outcome. Remember we are still in the midst of one of the strongest bull markets in bonds in American history. You want to step in front of that train?
at 12:03 AM No comments: Links to this post

Not all is well with the Dow Jones Industrial Average.
While some stocks are getting attention as they continue bullishly to new all-time highs, other stocks are quietly breaking to new 52-week lows during new downtrends.
Let’s note six of these stocks and what opportunities may be available in these downtrenders. 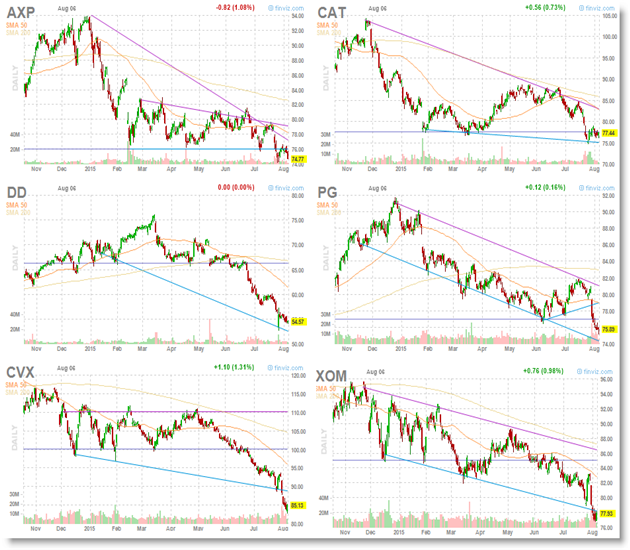 Breadth – the number of stocks at new highs minus those at new lows – is deteriorating.
The Dow Jones itself (30 stocks) is showing relative weakness to the broader S&P 500 Index.
at 12:03 AM No comments: Links to this post SEDG has formed a key support level at $27.50 (green) over the past month. In addition, the stock is declining against a short-term, downtrending resistance level (red). These two levels combined had SEDG stuck within a common chart pattern known as a descending triangle. Eventually, the stock will have to break one of those two levels.