Gold Fields Limited engages in the acquisition, exploration, development, and production of gold properties. It holds interests in eight operating mines in South Africa, Peru, Ghana, and Australia. As of February 27, 2012, the company had total attributable precious metal and gold equivalent mineral resources of 217.0 million ounces and mineral reserves of 80.6 million ounces. Gold Fields Limited was founded in 1968 and is based in Sandton, South Africa.

To review Gold Fields' stock, please take a look at the 1-year chart of GFI (Gold Fields Limited) below with my added notations: 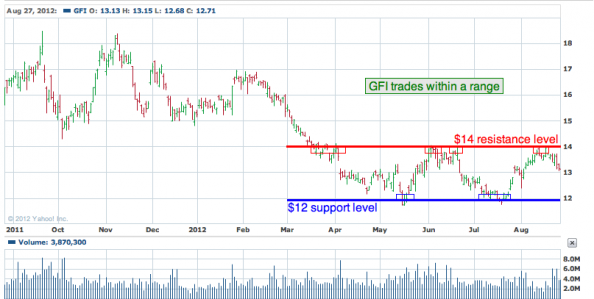 Chart patterns can also provide price targets. Simply take the height of the overall pattern and add or subtract that amount to or from the breakout or breakdown point to get the minimum price objective. For example, since the Rectangle pattern for GFI is $2 high ($14 - $12), GFI should climb to a minimum of $16 ($14 + $2) if it breaks above $14 or fall to $10 ($12 - $2) if the stock breaks below the $12 level. Chart pattern price targets are certainly not guarantees, but they are often fulfilled.

The Tale of the Tape: GFI has formed a very common chart pattern know as a Rectangle. The possible long positions on GFI would be either on a pullback to $12, or on a breakout above $14. The short opportunities would be at either $14 or on a breakdown below $12.
at 12:07 AM No comments:

Apartheid Redux: Platinum Mine Killings Cause Panic in South Africa 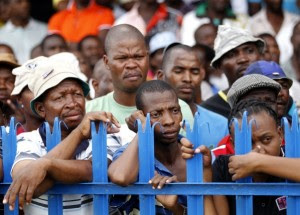 Let’s face it – the platinum miners who charged at police at one of the world’s biggest platinum mines this month must’ve known that they were going to get blow to sh*t. But, at the same time, for rock bottom wages, these miners tread 2 miles into the earth in order to mine platinum, having to move 10 tons of dirt for the rich man’s gold. So, perhaps therein lies a reason for their cracking and subsequent attack on police.

But the news in the wake of the event that 270 miners who were also on scene will be charged with the murders sounds like a Monty Python curveball of fiction. But, sometimes truth is stranger than fiction. Indeed, the police killing of 34 strikers in South Africa has resulted in the charging of 270 miners with the murder of their colleagues. South Africa’s justice minister said on Friday that the decision had caused “shock, panic and confusion” among South Africans. The killing of strikers at the Marikana mine earlier in the month represents one of the worst incidents since the end of white rulership in 1994.

Prosecutors said they have invoked the “common purpose” measure due to the fact that the miners were at the scene with weapons and therefore complicit in the killings. Members of the government’s Human Rights Commission questioned if the prosecutors knew the law. The law dates from the apartheid era under which they are deemed to have had a “common purpose” in the murder of their co-workers.

Art Cashin – The Most Disastrous Economic Event In US History

Today 50 year veteran Art Cashin shocked King World News by speaking about the most disastrous economic event in the history of the United States. Cashin said, “The most disastrous thing economically that happened in this country, happened in August of 1971, when they came off the gold exchange standard.”

Cashin, who is Director of Floor Operations for UBS, which has $612 billion under management, also warned, “I’m not sure that the leadership is alert enough to be able to implement the gold standard again, but they should really consider, at least, returning to something like the gold exchange standard.”

But first, when asked about how long and brutal this cycle is going to be for the disappearing middle-class and people who are suffering around the world, Cashin responded, “We’ve got a couple of things going here. In the stock market, traders think of something called the 17.6 year cycle. The feeling on Wall Street is that you go through these 17.6 year cycles, where you have a ‘fat’ cycle, where you can pick almost any stock you want and it will go up.”

So with that as the backdrop, the current 17.6 year cycle says we’ve got, probably, another 6 years to go. We (started this cycle) in February of 2000. If the economy is going to mirror the market, in some way, then for these people to get back on their feet, we may not be looking at months, we may well be looking at years, and several of them at that.” 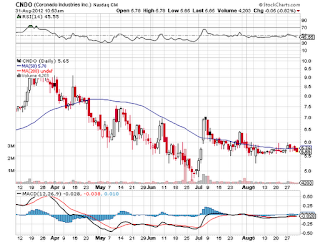 Coronado (CNDO) recently announced the initiation of TRUST- I, a Phase II trial of TSO (CNDO-201) in patients with Crohn's disease.

TSO, the microscopic eggs of the porcine whipworm, is a novel, orally administered, natural immunomodulator that regulates T-Cells and inflammatory cytokines.

TRUST-I is a randomized, double-blind, placebo-controlled, U.S. multicenter study designed to evaluate the safety and efficacy of TSO.

Approximately 220 patients with Crohn's disease will be enrolled and randomized to receive either 7500 ova or placebo once every 2 weeks, over a period of 12 weeks.

Dr. Karin Hehenberger, their Executive Vice President and Chief Medical Officer, is a recognized expert and has spent most of her career in diabetes research.

She is currently leading and coordinating Coronado's research programs for TSO, the company's biologic agent for the treatment of autoimmune diseases, in such therapeutic areas as inflammatory bowel disease, type-1 diabetes, multiple sclerosis, psoriasis and autism.

The timely start of Phase II in Crohn’s disease in the U.S. is a positive for CNDO. We look forward to seeing what we expect to be positive data in the second half of 2013.

The ability of TSO to potentially have efficacy in type-1 diabetes is truly revolutionary as, to date, the medical community has had zero success in preventing type-1 diabetes.

The potential markets that TSO may address are so large, that eventually there is no way CNDO will be able to fully develop TSO by themselves.

Thus, once TSO delivers positive Phase II data, we would expect CNDO to ink multiple partnerships as Phase II data that demonstrates both efficacy and safety, opening up the entire field of autoimmune disease as potential markets for TSO.

Coronado just announced hat it has entered into a $15 million secured loan facility with Hercules Technology Growth Capital. We believe the loan ensures CNDO has enough cash to fund its clinical operations into 2014.

We are buyers of CNDO at current levels as we believe the current valuation will look ridiculous once positive Phase II TSO data is delivered. CNDO is a buy under $8.
at 12:05 AM No comments: 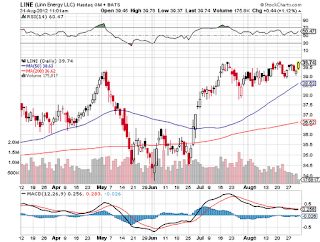 The firm has moved quickly to acquire gas-rich acreage at valuations and hedge future production at prices that guarantee a reasonable rate of return. As such, we view Linn Energy as a low-risk, high-yield bet on natural gas.

If natural gas prices remain depressed for an extended period, these acquirers can cut their costs to the bone by performing only basic well-maintenance work.

If natural gas prices rally after 2015, these companies can ramp up drilling activity to boost production and take advantage of higher prices.

Linn Energy hedged 100 percent of its expected natural gas output from these wells over the next five years. The purchased acreage also contains an identified drilling inventory of 800 additional sites, providing plenty of upside if natural gas prices rally.

Management notes that that deal will be immediately accretive to the Linn Energy’s distributable cash flow, enabling the firm to boost its quarterly payout to unitholders while maintaining a comfortable coverage ratio.

Linn Energy followed up this transaction with another deal with BP, spending $1 billion on 12,500 net acres and 750 producing wells in Wyoming’s Jonah Field.

Linn Energy also hedged all its anticipated production from this field through the end of 2017, limiting its exposure to fluctuations in commodity prices and locking in favorable profit margins.

The upstream operator -- which currently yields over 7% -- has grown its distribution by roughly 10 percent over the last year, and these latest deals should give the company the scope to increase its quarterly payout by another 10 percent to 15 percent in the next 12 months.
at 12:03 AM No comments: