In Spite Of Bounce, This Is How Horrific The Plunge Could Get

In spite today’s bounce, a 50-year market veteran warns just how violent things can get to the downside.
By Art Cashin Director of Floor Operations at UBS
October 17 (King World News) – “On this day (+2) in 1987 (that’s 27 years ago, if you are burdened with a graduate degree), the NYSE had one of its most dramatic trading days in its 220 year history.
It suffered its largest single day percentage loss (22%) and its largest one day point loss up until that day (508 points). No one who was on the floor that day will ever forget it. While it was an unforgettable single day, there were months of events that went into its making.
Continue Reading at KingWorldNews.com…
Please share this article
at 12:05 AM No comments: Links to this post

Oversold Market Set for a Snapback Rally, but Wait for This to Buy

The S&P 500 is nearing "official" correction territory, with panicked traders sending it down 9% in a matter of weeks. With all medium-term support lines and moving averages now broken, the last of the stops should soon be taken out. When that happens traders should get the chance to pounce on a good oversold bounce.
To be clear, I am not calling for the start of a new major bull market leg. Rather, the S&P 500 is reaching oversold levels, and like a rubber band that has been stretched too far, we could see a violent snapback rally.
For evidence of this, let's turn to the charts.

Small-cap stocks, as represented by the Russell 2000 (red line), have notably lagged in performance all year and were the writing on the wall for observant market participants. After double-topping with its highs in March and July, the Russell 2000 developed a significant lower high in early September, just as the S&P 500 (blue line) crawled to a fresh all-time high, thus flashing a major divergence. (more)
Please share this article
at 12:05 AM No comments: Links to this post

With the kind of week we have just been through, it is certainly a relief to see a bit of "calm" coming back into the markets to close out this wild week. Drawing too many conclusions from the price action is probably not too wise given the fact that there were huge money flows flipping into and out of various sectors as traders were trying to avoid not only getting steamrolled, but in many cases, apparently from what I have seen in the price action of some areas, desperately trying to minimize what no doubt were some enormous losses.
At least the Complacency Index, as I prefer to call the VIX, nudged down somewhat from what was a 22 month high! 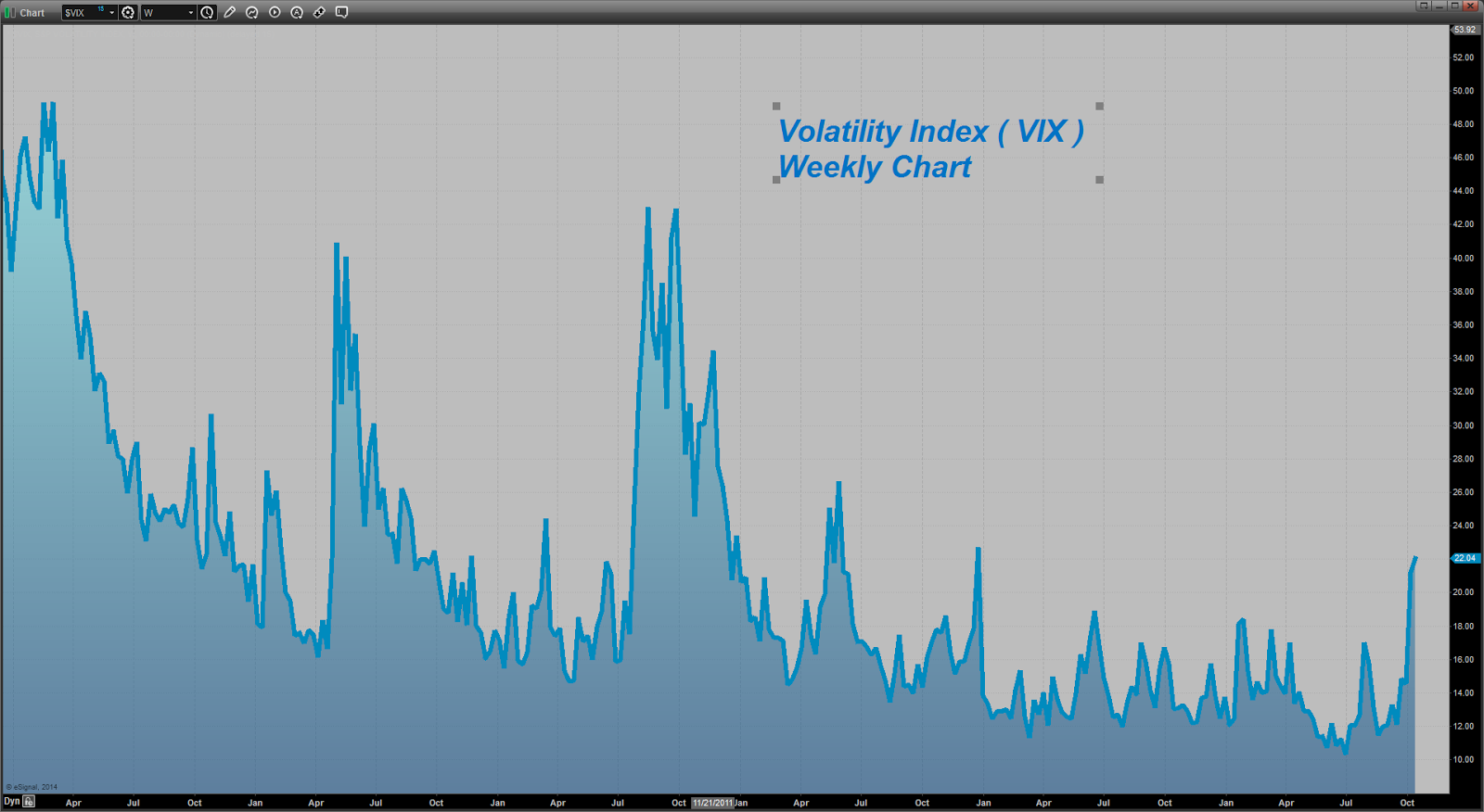 The Gold Volatility Index also moved lower today. It hit its highest level this year but compared to the VIX, still looks rather tame by comparison.(more)Please share this article
at 12:04 AM No comments: Links to this post

zerohedge.com / by Tyler Durden on 10/17/2014 11:05
Several days ago we were confused why, out of the blue, a €1 billion loan BWIC appeared that was dumping German non-performing loans. After all, the whole point of the European “recovery” fable to date has been to deflect all the attention from the “pristine” German banks, up to an including world-recordderivatives juggernaut Deutsche Bank,  and to focus on Greece and other insolvent peripheral European nation. Earlier today, German Handelsblatt provided an answer, when it reported that “four German banks are on the brink”, i.e., four banks of which three are known, HSH Nordbank, IKB and MunchenerHyp, will likely fail the ECB’s stress test whose results are due to be announced next Friday.
Keep in mind that this is a significant fraction of the 24 German banks that are undergoing the ECB’s Stressfarce test. So one wonders: if one in six German banks is so unsafe even the ECB (which kept Cypriot banks going well past their insolvency) will give them a black stamp (because in Europe failing a bank stress test is first of all impossible since both Bankia and Dexia passed theirs with flying cololrs, but more importantly a death sentence), what does that leave for the rest of Europe’s banks, all of which are in far more dire shape than sleepy Germany?
In any case, here is Handlesblatt’s warning:
READ MORE
Please share this article
at 12:04 AM No comments: Links to this post

Is Delayed Harvest Pushing Up Prices?

Over the past week, from a few articles I have read and from farmers that have contacted me, there is a belief that grains may have put in a bottom. May have? Farmers are certainly hoping and reporters have something to use to fill reports. Since I don't carry the same school of thought, I have to wonder what they see that I don't. Other than the last WASDE report claiming more feed usage I find it hard to understand why it is so difficult to see that big speculative money has used a time around a report to become very active.

The increase in the daily volume over the past week often has been twice, if not more than the volume traded day after day throughout the entire summer and first few weeks of fall. When the Commitment of Traders report is released for this week, I doubt we will see that commercial buyers have been the main buyers. (more)

Back on September 2 I wrote (http://investrac.com/blog/dow-30-at-the-long-term-apex) that the DJIA had either peaked in August or would do so in September and would fall until November 2016, and for the record the high came on September 19 at 17351...so InvesTRAC is long term bearish. Then on October 3 I showed a bullish chart of the 10 year Treasury yield with InvesTRAC's forecast for declining interest rates until January 2016 (http://investrac.com/blog/bull-market-in-bonds)...so InvesTRAC is long term bullish on TBonds. If this is to be then the DJIA/TBOND ratio should give evidence that it is going to decline. And indeed it has. Take a look at the weekly chart of the DJIA/TBOND ratio plotted weekly showing the July 13 2007 high at 130.0 followed by a decline of 60 percent to 51.5 on March 6, 2009. During this time the Dow dropped from 13907 to 6627 (-52%) and TBonds rose from 106.97 to 128.56 (+20%). After the low at 51.5 the ratio rose to 128.45 almost reaching the 2007 high at 130 ...it failed to get above the previous top and then violated its uptrend and now it is breaking down through support. InvesTRAC's forecasting model shows that the decline in the ratio could last until October 2015 before there is a meaningful correction. If history is going to be repeated then best strategy is to be long TBONDS short equities in equal values. 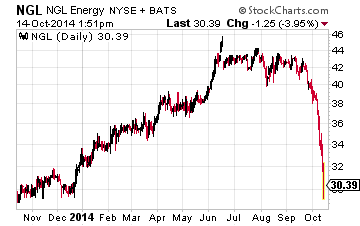 The currently running stock market correction has been especially hard on stocks in the energy sector. The falling price of crude oil has led the drop, reducing expectations for future profit levels in the energy sector and driving stock prices down.
However, the large and inclusive decline of almost all energy related stocks, including one group with revenues that are not closely linked to the price of crude, has presented some tremendous buying opportunities to get stocks paying high yields. One of them is energy midstream infrastructure companies. These companies do not earn revenue based on the price of crude oil, and therefore are protected from the pains of $80 a barrel oil. These three stocks have been hit just as hard as the rest, and are now trading at attractive multiples and all have yields higher than 6%. (more)