The dollar financial system of Wall Street was born not at a conference in Bretton Woods New Hampshire in 1944. It was born in the first days of August, 1945 with the dropping of the atomic bomb on Hiroshima and Nagasaki. After that point the world was in no doubt who was the power to reckon with. This book is no ordinary book about money and finance. Rather it traces the history of money as an instrument of power; it traces the evolution of that power in the hands of a tiny elite that regards themselves as, quite literally, gods-The Gods of Money. How these gods abused their power and how they systematically set out to control the entire world is the subject.

Ned provided some explosive details regarding the infamous GLD gold bar presented by CNBC’s Bob Pisani which was quickly discovered NOT to be on the GLD’s bar list.

Ned reveals the ACTUAL OWNER of the gold bar shown on CNBC, who HAD NOT GIVEN PERMISSION to CNBC or to Bob Pisani to handle their bullion, and was shocked to see Pisani claim their bar as part of the holdings of the GLD!

In Ned Naylor-Leyland’s words, ‘this tells you EVERYTHING YOU NEED TO KNOW ABOUT ETF’S!!‘
First, for those who are not familiar with the CNBC story:

As our readers are well aware, it was quickly discovered that the gold bar held up by Pisani in the interview stamped ZJ6752 was not included in SPDR’s gold bar list.

The story almost immediately went viral, but CNBC went silent on the issue over the actual ownership of the gold bar held by Pisani. (more)

Today John Embry told King World News that, despite the rally, investors should brace for “global financial crisis II.” Embry also said this crisis will be “more unpleasant than the first one.” Embry, who is Chief Investment Strategist of the $10 billion strong Sprott Asset Management, also told KWN that gold and silver will reign supreme during the upcoming turmoil. But first, Embry had to say about the Egon von Greyerz prediction of a massive global bailout: “I believe that’s very realistic. They will go down the path of trying to continually bail this system out to prevent a collapse. Nobody wants to be at the helm when the ship goes down, so they will try to move heaven and earth to prevent that.”

Walgreen Co. (NYSE:WAG) — This is the largest revenue producer among the U.S. retail drug chains. But ever since it ended its relationship with Express Scripts in 2011, it has been in a decline.

Sales leverage has been running behind other drug chains, and the company will likely experience very low sales growth in the future. Earnings for fiscal year 2012 are estimated at $2.76, down from $2.94 in 2011.

Technically WAG appeared to be consolidating within a rectangle until it broke through its 50-day moving average and support line in May.

The recent rally could take the stock back to its 50-day at $33 where it should be sold since the current pattern is that of a bearish horn — one of the most feared technical patterns.

A penetration through the lower support line at about $29 targets the stock for a fall to $22.

The "Chart of the Day" is Ferrellgas Partners (FGP), which showed up on Monday's Barchart "NYSE 3-Month High" list. Ferrellgas on Monday posted a new 3-month high of $18.02 and closed up +3.19%. TrendSpotter has been long since May 3 at $15.78. In recent news on the stock, Ferrellgas on June 8 reported fiscal Q3 EPS of 26 cents versus the consensus of 19 cents and said it sees positive momentum carrying over into fiscal Q4. Ferrellgas Partners, with a market cap of $1.2 billion, is engaged in the sale, distribution, marketing and trading of propane and other natural gas liquids.

Gold and Silver for the Long Haul, Short Term Trends Aside – Charles Biderman 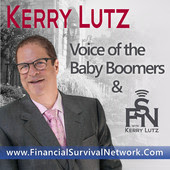 Charles Biederman of www.TrimTabs.com has been selling research to hedge funds and other Wall Street groups for many years. Now he’s providing valuable information to individuals around the globe. While he’s been short term bearish on metals, Charles is an established trader who’s able to profit from these moves like most individuals cannot. His model portfolio is 25% gold and shorts on the Euro among other positions. Personally, I’m long on Rottweilers; these canine protectors are among the best, and if it all hits the fan, you’ll need effective protection for your home and family. Spreading out your holdings is also a wise move and should be considered. Global uncertainty is going to have affects upon every person in the world, whether you’re prepared or not. So better to be ready when the inevitable comes.

Dolby Laboratories, Inc. develops and delivers products and technologies that are used in the entertainment industry. Its audio technologies are used throughout the global entertainment industry. It is developing and marketing video technologies to improve the quality of video presentation. Its offerings include video products aimed at the cinema market, such as its digital cinema server, its Dolby 3D Digital Cinema products, and its Dolby PRM-4200 Professional Reference Monitor. It offers products and services to content creators, such as studios, broadcasters, and downloadable content service providers to encode content using Dolby's technologies. The company sells its products and provides services in over 85 countries. In addition, it has licensed its technologies to CE manufacturers and to software vendors in 40 countries, which in turn distribute their products incorporating its technologies throughout the world.

Please take a look at the 1-year chart of DLB (Dolby Laboratories, Inc.) below with my added notations:

DLB is interesting due to the formation of (2) converging support levels. First, an up-trending support level (blue) has developed. Remember, any (2) points can start a trend line, but it's the 3rd test and beyond that confirm its importance. Obviously DLB's trend line is very important to the stock since it has been tested on multiple occasions. Next, DLB has a key level of $40 (green) that is now acting as support. The stock appears to be pulling back to that $40 level, which is also where the up-trending support level currently sits. A hold of $40 could lead to a run back up to the $45 resistance (red).

The Tale of the Tape: DLB has (2) support levels, both of which currently sit at or near $40. If the stock pulls back to $40 a long trade would be advisable. However, if the stock were to break below $40, thus breaking both supports, a short play should be made instead.