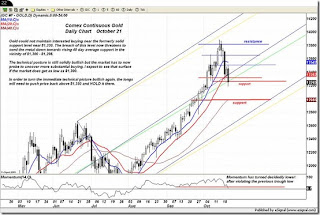 The Perfect Technical Trade for This Market: Gilead Sciences 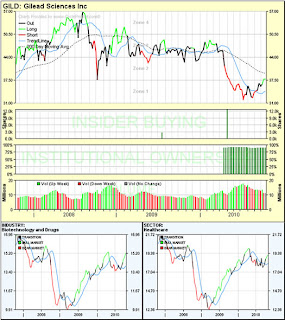 I continue to be very uneasy about the market and believe it could begin trending lower at any time, so my natural inclination is buy inverse exchange-traded funds (ETFs). These are baskets of stocks that move higher when the market moves lower.

I gave you a great inverse ETF a couple of weeks ago, ProShares UltraShort S&P 500 (NYSE: SDS). I recommended this ETF because my systems were telling me then, and they continue to tell me now, that this market could move lower in the near term -- perhaps a lot lower. But, what did the market do last week? It moved high enough to stop us out of the SDS trade.

There is an old saying that the market can remain irrational longer than you can remain solvent. One of these days, the market's trend will reverse and I am afraid that it will not be a happy ending. (more)
at 12:24 AM No comments: Links to this post

More than 76 percent of MSCI World Index companies that reported quarterly results since Oct. 7 have beaten the average analyst estimate, bolstering optimism that earnings growth will hold up even as the economic recovery slows. China’s economy expanded 9.6 percent in the third quarter, increasing pressure on the country to let the yuan gain as Group of 20 officials prepared to meet in Seoul tomorrow to discuss currencies.

“From an investment perspective, I think of this economy as an Irish summer,” said David Kelly, who helps oversee $445 billion as chief market strategist for JPMorgan Funds in New York. “It’s very disappointing if you go there on vacation. But if you’re trying to grow things, it’s actually pretty good. This is great time for growing profits. That should help the stock market go up.” (more)

News in Commodities: Tug of War

We’re at the fork in the road in a number of markets. In the next few sessions we will find out who wins the BULLS or BEARS. On a break below the double bottom in December Crude futures at $79.85 look for a test of the 50 day MA at $78.80 followed by a trade down to $77. Our aggressive clients were advised to have a small allocation short December futures or January put spreads. Reminder for every $1 move in Crude futures one should see a 3-4 cent move in the distillates in the same direction as a rule of thumb. The losses in natural gas have been painful; thankfully most clients only have a small position. Being prices are approaching the cost of production we should see prices stabilize from here but we’ve made a decision not to purchase any clients that are not already involved until we see evidence of a true bottom. As of this post a failed rally in the indices. Aggressive clients are fading rallies in ES futures while others are still holding November and December put spreads. New entries are advised to buy just out of the money December ES put spreads.

With the Pound lower and dollar higher it was odd to see cocoa up on the day. We expect this rally to fizzle into next week and remain short via puts with some clients expecting a trade closer to 2600. Wait for further evidence of an interim top to establish bearish positions in cotton and sugar. Most likely we will have some trade recommendations next week. Coffee closed above $2/lb. today for the first time in 15 plus years. Latecomers may drive the price higher so hold off on shorts for a few sessions. (more) 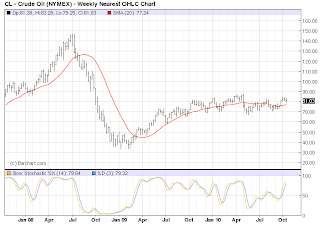 The Energy Report: Frank, as editor of Penny Stock Specialist, you cover a number of stocks trading under $10. But you recently wrote a report on Exxon Mobil Corp. (NYSE:XOM) and its competitors for Growth Stock Wire. So, tell us what you specialize in.

Frank Curzio: I specialize in small-cap stocks, but it's very important to look at the big picture—the macro view—to get a good read on smaller companies. For example, most analysts are now lowering estimates on Exxon due to lower natural gas prices following its recent acquisition of XTO Energy Inc. (NYSE:XTO). We have an enormous amount of natural gas in the U.S.—enough to supply consumers for more than 100 years. And producers continue to drill. Just knowing that information through looking at some larger-cap companies makes me a little nervous recommending smaller-cap natural gas companies. As for Exxon, it's trading over 10 times next year's earnings—a little more than 2% yield. I'd rather buy Chevron Corporation (NYSE:CVX) or ConocoPhillips (NYSE:COP). They trade at a lower multiple, pay a higher yield and, actually, are growing faster than Exxon.

TER: Speaking of Chevron, its margins are pretty substantial with oil around $80/barrel. It's going to use some money to buy back shares starting in the fourth quarter. Chevron's one of a number of companies that has announced stock-repurchase programs in recent months. Do these buyback programs form an investment thesis among oil companies? (more)

(Quick last-minute note: I think this (and next week's) is/will be one of the more important letters I have written in the last ten years. Take the time to read, and if you agree send it on to friends and responsible parties. And note to new readers: this letter goes to 1.5 million of my closest friends. It is free. You can go to www.frontlinethoughts.com to subscribe. Now, let's jump in!)

There's trouble, my friends, and it is does indeed involve pool(s), but not in the pool hall. The real monster is hidden in those pools of subprime debt that have not gone away. When I first began writing and speaking about the coming subprime disaster, it was in late 2007 and early 2008. The subject was being dismissed in most polite circles. "The subprime problem," testified Ben Bernanke, "will be contained."

My early take? It would be a disaster for investors. I admit I did not see in January that it would bring down Lehman and trigger the worst banking crisis in 80 years, less than 18 months later. But it was clear that it would not be "contained." We had no idea.

I also said that it was going to create a monster legal battle down the road that would take years to develop. Well, in the fullness of time, those years have come nigh upon us. Today we briefly look at the housing market, then the mortgage foreclosure debacle, and then we go into the real problem lurking in the background. It is The Subprime Debacle, Act 2. It is NOT the mortgage foreclosure issue, as serious as that is. I seriously doubt it will be contained, as well. Could the confluence of a bank credit crisis in the US and a sovereign debt banking crisis in Europe lead to another full-blown world banking crisis? The potential is there. This situation wants some serious attention. (more)

The debt burden of the Federal Employees Retirement System (FERS) is even worse than that of the Social Security system this year, says financial commentator Bruce Krasting, an ex-hedge fund manager.

“I pick on FERS as it is a little known entitlement program. They paid out only $70 billion last year, (while) their big sister, Social security will lay out $700 billion,” Krasting writes on Business Insider.

But in fiscal 2010, ended Sept. 30, FERS had a larger impact on debt held by the public and total debt than the Social Security Administration, he says.

The numbers aren’t pretty. FERS added $62 billion to the government’s total debt load in 2010, he says. And it created a $37 billion increase in debt held by the public. Those totals exceed the numbers for Social Security, Krasting says. (more)
at 12:14 AM No comments: Links to this post 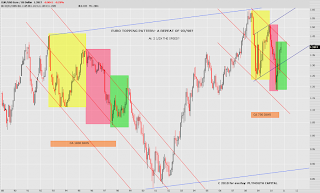 Your technical chart of the day...

Here's the euro from 1988 (reconstructed, obviously based on the component currencies) until now.

It turns out that the big Wall Street banks have found a dirty new way to make loads of cash from U.S. homeowners, and they really, really don't want to talk about it. So what is this dirty new business? America's biggest financial institutions have become property tax collectors, and it is extremely lucrative. From coast to coast, the big Wall Street banks are buying up thousands upon thousands of tax liens and are making a killing by socking distressed homeowners with predatory interest, outrageous penalties and almost unbelievable legal fees. In some areas, the big banks are able to foreclose on these homes in as little as six months. The elderly and the poor are the most common targets of these practices. An absolutely brilliant expose in the Huffington Post has brought these issues to light, and it is creating quite a controversy in the financial world. The big banks are doing nothing illegal here. Local governments are offering to sell thousands of tax liens and somebody is going to end up buying them. But something seems extremely unsavory about the big Wall Street banks capitalizing on the economic downturn that they were so instrumental in causing in such a predatory manner.

Today, millions of American families are barely hanging on to their homes by their fingernails. Millions are out of work and millions of others are barely making enough to put food on the table. Meanwhile, property taxes have absolutely soared in most areas of the nation over the past decade. Many Americans are finding that when that time rolls around they simply do not have a big chunk of extra money to pay a property tax bill. (more)

No matter what central bankers and the cheerleading, mostly useless academics who surround them pronounce in their self-created aura of infinite academic “delicacy and refinement”, under the auspices of the Fed they will do precisely one thing: print, print, and print. Sadly, as Mignon McLaughlin observed, “The know-nothings are, unfortunately, seldom the do-nothings.”

I should like to emphasize once again that the US Fed will continue to monetize massively on any sign of either further economic weakness or a more meaningful (10% or so) financial and property market decline.

In the world I described above, the increased supply of dollars will flow somewhere.

Recently, CNBC interviewed 81-year-old Bernie Marcus, one of the founding partners of Home Depot. (He was CEO between 1979 and 1997.) Marcus, who is a self-made man and completely level-headed and without arrogance of any sort, described how he and Arthur Blank (the other co- founder) struggled when they opened their first store in 1979, in Atlanta. (more)