You're Doing It Wrong: 4 Mistakes That Make Everyone a Bad Investor

"How can I become a great investor?"
That's probably the most common question we get from Motley Fool readers.
But for most investors, especially beginners, it's the wrong question to ask. Most investors underperform the market. When that's the case, how to become a great investor isn't what's important; becoming a less-bad investor should be the goal. The difference is subtle, but important. Economist Erik Falkenstein explains:


In expert tennis, 80% of the points are won, while in amateur tennis, 80% are lost. The same is true for wrestling, chess, and investing: Beginners should focus on avoiding mistakes, experts on making great moves.

Whats Up With Lumber & The Soft Commodities 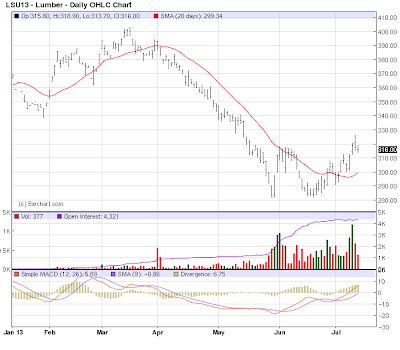 Cotton Futures--- Cotton futures are still trading below their 20 and 100 day moving average basically settling unchanged for the trading week with major support at 83 and major resistance at 87 as the USDA this week stated that the new crop production was kept unchanged along with consumption which still tells me lower prices are ahead but at this point in time there really is no trend in cotton as we are trading midrange in the last couple of months but I do believe commodity markets still look weak despite the fact that Ben Bernanke continues to try to prop up asset classes.

Cotton prices rallied earlier in the week along with grain prices as hot temperatures in Oklahoma and Texas and they are worried about drought conditions in certain areas, however as the week progressed prices can back down to reality and with weakening demand in China I still believe lower prices are ahead but I'm advising traders to sit on the sideline until 83 is broken and then I would place my stop loss at the 10 day high minimizing risk in case the trend does change.

Coffee Futures--- Coffee futures were down 400 points today and are trading below their 20 and way below their 100 day moving average still stuck in a 4 week consolidation looking to retest contract lows at 117.10 settling last Friday at 121.25 going out today around 119.50 right at a 3 year low and it looks to me that prices are still headed lower as coffee is considered a luxury item and with deflation in the year coffee prices might retest 100 a pound in the coming months. Coffee prices have been in a steep decline for 3 years now and finally they are starting to stabilize with volatility near all-time lows because generally coffee is one more volatile commodities but in recent weeks is just been very quiet & one of these days this volatility will pick up again but at this point it looks to retest 100 a pound in the next couple of months as the classic bear market continues with the slow grinding down moves on a daily basis.  (more)

Stocks received a nice boost to start Thursday trading, as investors focused in on a recent Q&A session from Fed Chairman Ben Bernanke. The statements were made at a conference at the National Bureau of Economic Research, and were well-received by those looking for stimulus programs to continue a little longer.

In the session, the Chairman said, ‘You can only conclude that highly accommodative monetary policy for the foreseeable future is what's needed in the U.S. economy’. He also stated that the current unemployment rate of 7.6% ‘probably understates the weakness of the labor market’, suggesting to many that Bernanke isn’t as hawkish as many might have initially thought (read QE Tapering Could Make These Bond ETFs Winners).

The statements also imply that tapering may not begin in the immediate future, potentially pushing a reduction of bond buying into the end of the year, if not 2014. It also suggests that even if a 6.5% unemployment rate is hit, this may not cause a rise in rates as the ‘real’ unemployment rate—especially when counting underemployment—is far higher than the 6.5% target and that more accommodation may be necessary to get back to full employment.

This news was very well received by the markets, as a number of securities took off in Thursday trading with the S&P 500 adding about 1%. However, a few corners of the market did even better on the day, and we have highlighted a few of the biggest ETF winners that surged thanks to Bernanke’s dovish comments below:

More easy money is good news for precious metal investors, as it could help to push the dollar down and increase the appeal of alternative assets. After all, gold had been doing pretty well for much of the Fed’s easy money history, though it has traded sluggishly—to put it mildly—as of late due to talk of a wind down in the QE program. (more)

‘Abolish the IRS’ Because Americans Have Lost Faith in the Agency, Bossie Says

With the possible exception of Congress, few government institutions are held in such low regard as the Internal Revenue Service. The nation’s tax collector is never popular, but the IRS has come under intense scrutiny this year amid revelations its agents targeted Tea Party groups in what appears to be a politically motivated crackdown against conservative organizations.

So intense is the heat on the IRS that the House is considering a bill to cut its funding by 24% vs. year-ago levels while at least two sitting U.S. Senators openly support an effort to abolish the institution altogether.

Republican Senators Rand Paul (KY) and Ted Cruz (TX) are both actively supporting ABOLISH THE IRS, which is backed by Citizens United -- a tax-exempt non-profit best known for its victorious Supreme Court challenge of the McCain-Feingold campaign finance law.

“I want to abolish the IRS and create a new entity,” says David Bossie, president of Citizens United. ‘This organization is so distrusted and so broken, it actually would be a healthy thing for the American people to demand we abolish it and create something new.”

Bossie admits, “We have to have revenue collection” but does not have an answer to what would replace the current system – be it a flat tax, ‘fair’ tax or other “equitable” system.

But his view is to end the current system first and then have a debate about what should come next. “We need to take this time to say ‘maybe we can do it better, more streamlined,’” he says. “Let’s take a fresh approach vs. tinkering around and manage the decay as we do here in Washington.”

To be sure, the idea of abolishing the IRS has been on the agenda of conservatives like Bossie since the 1990s and odds of legislation passing a highly partisan, highly dysfunctional Congress are extremely low. But the politicization of the IRS and other gaffes – such as the release of Social Security numbers of people who donated to political organizations – have put the agency on the defensive and energized its opponents. 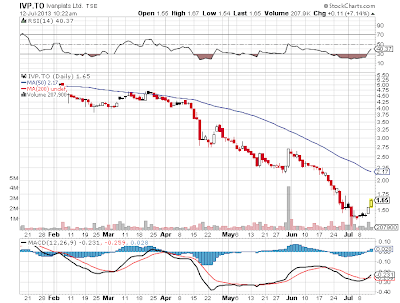 Ivanplats Ltd. (IVP), the mine developer founded by billionaire Robert Friedland, is the worst performer among its global peers this year. Analysts say its stock should be almost three times higher.

Ivanplats has dropped 69 percent this year in Toronto, the most among 115 companies in a Bloomberg mining index, which has fallen 30 percent.

The Vancouver-based company’s capital-expenditure needs, the geopolitical risk inherent in its African projects and the general doldrums in the global mining industry have spurred the decline, said John Goldsmith, deputy head of equities with Montrusco Bolton Investments in Toronto.

“The big issue with them right now is they do have a substantial amount of capex requirements,” Goldsmith, whose company manages C$5.5 billion ($5.3 billion), said in a July 10 phone interview.

The riskiness of operating in Africa also is being factored into the way the shares are valued, he said.  (more)

Eric King:  “What about the gold market?  We are seeing record short positions by hedge funds and the public.  What could this mean for the gold market going forward, Art?”

Cashin:  “It could be dramatic.  You’ve got a couple of things going on:  You saw what is called a ‘backwardation’ in the gold futures.  That has occurred, don’t hold me to this, but I think about four times over the last 10 years or so, and it’s usually been at or around a bottom in gold.
READ MORE
Please share this article
at 12:03 AM No comments: Links to this post

Unleaded Gasoline on the Move 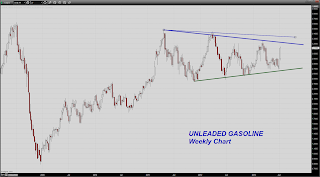 I have been watching developments in the crude oil and unleaded gasoline markets with a great deal of interest. This week’s numbers from the EIA and other private sources shocked the market due to the extent of the drop in crude at Cushing and sent both markets on a tear higher. Crude is now trading close to $106/bbl as I write this and unleaded gasoline has pushed above the $3.10 mark (remember – that is a wholesale price not the pump price).
Frankly I do not see the US economy as strong enough to support either crude or unleaded gasoline at current prices but right now hedge funds are driving these markets higher and the momentum is strong to the upside. There certainly is no shortage of WTI from what I can see but a goodly portion of it appears to be leaving the US via exports to the EU and elsewhere.
Continue Reading at TraderDanNorcini.Blogspot.ca…
Please share this article
at 12:03 AM No comments: Links to this post

US budget surplus highest in five years in June.

The improving US economy meant that tax receipts were higher than expected.

Also, government spending plunged by 47% due to package of spending cuts and tax increases passed in January, know as the sequester.

Government owned mortgage firms, Fannie Mae and Freddie Mac, added $66.3bn (£43.8bn) in payments. They have been in public ownership since 2008.

Despite that strong month, the Congressional Budget Office forecasts the annual deficit will be $670bn (£443bn) when the budget year ends on Sept. 30.

The rising deficit means the US government is once again expected to hit its debt ceiling - the point at which it must borrow more money to pay for ongoing obligations - in the autumn.

The Obama administration must get Congressional approval to raise the limit, which has often proved to be a pivotal point for negotiating future spending deals.

In 2011, the federal government almost shut down as a result of the negotiations and rating agency Standard and Poor's downgraded the US's credit rating from AAA to AA+.
Please share this article
at 12:03 AM No comments: Links to this post