The Gold Report: Not so long ago, mining promoters—larger-than-life personalities who revved up retail investors about stocks—were an essential part of the junior mining business. But the NI 43-101 limits how much company presidents and CEOs can tout their stocks. Do promoters still have a role or have they disappeared from the scene?

James West: Promoters have not disappeared from the scene. Yes, the NI 43-101 puts a filter on how public companies communicate with the market, but promoters are essential to the life cycle of public companies.

There was a time when promoters were infiltrated by a larcenous element that would create and promote deals that could at best be described as very optimistic. Back then, these misleading statements could be distributed almost clandestinely. Thanks to the Internet and the NI 43-101, that larcenous element has largely been unable to operate as freely. People hear "promoter" and they immediately think "con artist," which is wrong-headed and a throwback to the pre-Internet era. Promoters now are legally responsible for the statements they make on behalf of a company. As a result, promotion is a lot more respectable. (more)

With all that’s going on, would you believe the market, as measured by the S&P 500 index, is only 4% off its high? Some folks interpret this fact as investors “shrugging off” bad developments, looking ahead to some unseen, glorious future that none of us individually can imagine.

But the “wisdom of crowds” is overrated. I see an epidemic of denial — denial at a level last seen near the 2007 market peak, when central bank policy was thought to be propping up stock prices. That denial didn’t end well.

Psychology and sentiment are important in markets, but not as important as overwhelming negative evidence, including the following seven reasons to remain bearish (the reasons to be bullish are well-known among institutional investors who have nervous clients’ money fully invested): (more)

Listen to the interview here.

“I don’t think the Euro situation can be resolved. I don’t think the world situation of continuing to expand debt and trying to create economic traction, of which there is very little, by expanding debt, will have any sustainable impact. Going to to the Australian School of Business, there is one of two things that is going to happen. You are going to repudiate the debt, which was the case in Greece Federal, they repudiated a hundred billion. Or you are going to try to print your way out of it and we perhaps haven’t quite seen the mass of printing that we might expect but in either scenario, there are only a couple of safe assets and those are precious metals.”

I believe that the T-Bond market (basis the futures) is in the final blow-off of a bull trend that began in the early 1980s. This current advance should accelerate to the mid to high 150s before the final top in prices (low in rates) occurs.

The advance in mid May completed an 8-month rectangle on the weekly and daily continuation charts (daily chart shown below). This pattern has an unmet target of 158-00 to 158-16. Following the mid May breakout the advance in the market stalled and the upper boundary of the rectangle was retested in mid June. 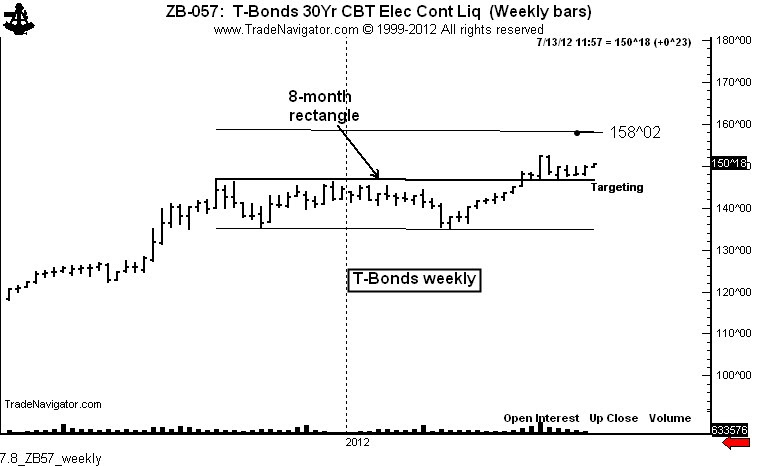 The daily contract of the Sept. futures shows this retest in close up. Note that the retest has taken the form of a 5-week symmetrical triangle. The advance on Monday penetrated the upper boundary of this small pattern, thus confirming that the retesting process is complete. The target in the Sept. contract is 155-00 to 156-00. (more)

The Next Wall Street Scam with Real Estate

It didn't take long. We now know by an interview with Maria Bartiromo today that these Wall Street innovators want to package up rental income and sell it as securities to unsuspecting investors. I didn't have a clear view regarding the purpose of the 1 percent buying real estate to rent when I wrote that the 1 percent were buying up all the low end real estate.

But leave it to the 1 percent to figure out a way to pawn off risk to everyone else so that they can try to manufacture a housing bubble on the backs of renters! The same risks that occurred when we had securitization of mortgage backed securities will likely accompany these securities, including lack of transparency, ratings companies rating these securities, and the SEC and more inept government agencies policing these securities.

But the danger goes beyond the actual risk of the securities themselves. That was not covered by the best looking CNBC shill for the banks, Mrs Bartiromo. The danger is that the money generated by these securities will be plugged into even more purchasing of homes. And the fervent heat by which these buyers in the 1 percent will buy could cause another housing bubble if the scale is big enough. (more)

About this Week’s Show:
-High Frequency Trading dominates current market
-Stocks are now in a period like 66’– 82’
-Regulation would help, but the Fox is in the Henhouse
ek’s Show:

Deflation – Nowhere to be Seen

There are frequent claims that the U.S. economy has entered a period of “deflation.” These claims are totally unfounded and are false. Deflation can only be a persistent state of general price decline. In fact, in examining price trends, the U.S. is experiencing shocking price increases of over 15% per annum. To illustrate this, Figure 1 shows the Continuous Commodities Index, CCI over the past ten years.

The CCI shows there are periods of high inflation and brief periods of “disinflation”. “Disinflation” is a period when the money supply expansion slows but does not contract. An analogy of this is a car that can speed up or slow down but does not stop. When the car accelerates it is analogous to inflation, while the car slowing down is analogous to “disinflation.” Conversely, “deflation” would mean that the car stops and reverses. There is absolutely no sign of any reversal in the general trend of inflation.

The index is equally weighted so it is the geometric mean of these 17 commodity prices. This means that the price of the CCI cannot spike due to an increase in price of just one or two commodities. For the index to rise 10% all 17 components would need to rise 10% or one component would have to rise 500%. If oil were to rise tomorrow to $400/bbl and all other 16 components did not change in price, the index would only rise by 10%. This means that the CCI is a stable indicator of price trends.

What can be seen from figure 1 is that the CCI has been in a rising trend for ten years as shown by the solid red channel.

The financial crisis has caused a massive increase in money supply coined, “Quantitative Easing.” This has led to relatively more money chasing fewer goods and services; a textbook definition of inflation. The U.S. has financed two wars in the past ten years, costing trillions of dollars. Instead of exercising fiscal discipline to pay for their foreign misadventures, money has been printed at alarming rates. The parallels of the US economy with that of Weimar Germany are eerie. The post-war economy was in ruins. They were saddled with huge debt in the form of war reparation obligation payments. In order to meet the gap between tax receipts and expenditure they printed money. The main concern at the time for the global economy was a fear of deflation. This turned out to be totally misguided. Instead, the monetary destruction was fast. It took only 12 months to transition from mild inflation to high inflation and then a further 16 months to ramp up to total hyperinflationary destruction of the currency.

There has been no true occurrence of “deflation” in the last 77 years. Deflationists point to Japan as an example but it is more accurately defined as “disinflation” rather than deflation because Japan’s money supply has never contracted; its rate of expansion slowed and reached the zero level for a while.

Regarding the U.S., Figure 1 shows the trend in “disinflation” has now started its reversal to inflation and so, a period of high inflation is resuming. It is short periods of “disinflation” that have the media and commentators erroneously claiming deflation. As the period of inflation accelerates, it is an excellent time for investors to add to or commence their long positions in precious metals.

Owning physical allocated gold and silver is the time honored protection of wealth from the destructive ravages of inflation and hyperinflation. The CCI demonstrates unequivocally that inflation is consistently destroying your wealth. The current dip in the prices of gold and silver provides an excellent opportunity to buy.

Superinvestor Mark Mobius: This emerging market's worst days are over

Not too long ago, HSBC called India's economy a "gasping elephant." It printed first-quarter GDP of just 5.3 percent. Its politics are in turmoil. The country doesn't even have a Finance Minister after one recently stepped down.

But Mobius, a pioneer in emerging market investing, said India's downward cycle may be coming to a close.

Some takeaways from the interview in the ET... (more)
at 12:03 AM No comments: Links to this post