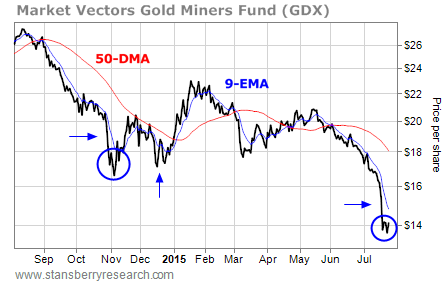 Gold stocks collapsed last week.
The Market Vectors Gold Miners Fund (GDX) – which holds the shares of most major gold producers – was down 15% on Thursday's close. On Friday, it traded as low as $13.17 per share... its lowest price ever. But two hours before the end of trading, GDX reversed into positive territory. And it closed 3.4% higher on the day.  (more)
at 12:03 AM No comments: Links to this post

Brent Crude Tumbles Below $50 For First Time Since January 2015 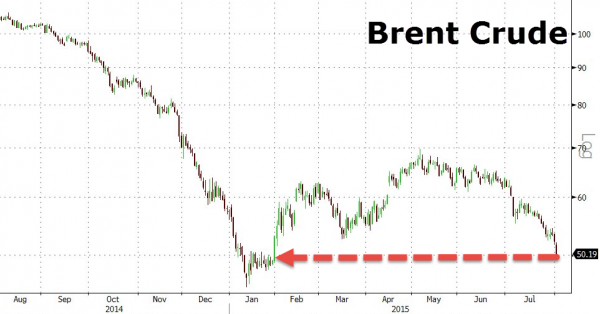 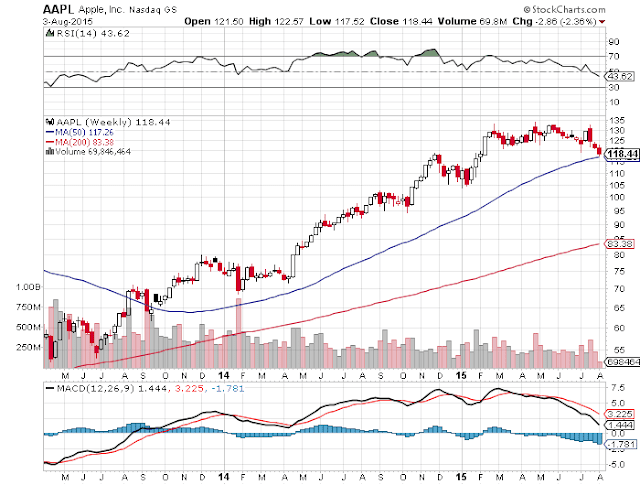 Having broken its 200DMA earlier this morning, selling pressure has continued in the "as goes AAPL, so goes the US economy and stock market". Now down almost 12% from earnings exuberance, AAPL is in correction territory and is trading at six-month lows...
at 12:03 AM No comments: Links to this post 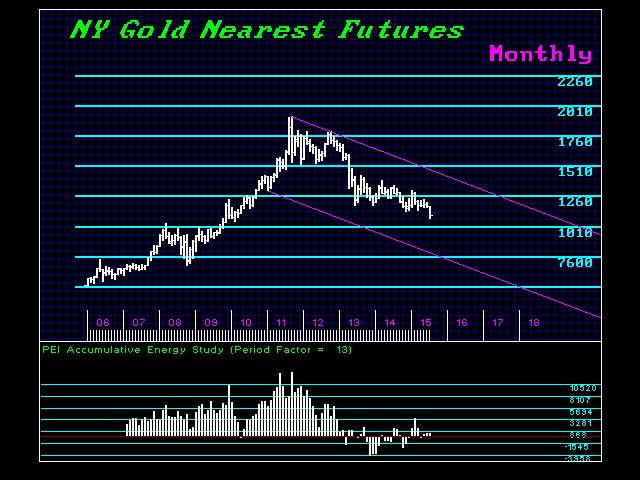 Gold elected the Monthly Bearish at 1155 and we did so well below that level, holding the 1084 number both weekly and monthly. Our energy models are turning positive, so it does not appear that we will have major follow-through at this time. When you elect a Bearish Reversal that far from the number, you typically bounce back to retest it before proceeding further.
We have a Directional Change back to back for August, September, and July. So, we may see a reaction to the upside to flush out the shorts since we have excessive bearishness building in the press, as the WSJ commented that gold is the “pet rock”.
A reaction rally at this point BEFORE new lows will relieve the short positions, but this is not likely to last beyond September. Therefore, we are more likely than not going to see the final decline stage into the Benchmarks. Gold is within the channel so the resistance is forming at the 1155 level followed by 1225-1300. Support will remain at 1084 on a closing basis with key support at 900.
at 12:03 AM No comments: Links to this post

Tiffany & Co., through its subsidiaries, designs, manufactures, and retails jewelry worldwide. Its jewelry products include fine and solitaire jewelry; engagement rings and wedding bands to brides and grooms; and non-gemstone, sterling silver, gold, and metal jewelry. The company also sells timepieces, leather goods, sterling silverware, china, crystal, stationery, fragrances, and accessories. In addition, it wholesales diamonds to third parties. The company offers its products through retail sales, Internet and catalog sales, business-to-business sales, and wholesale distribution. As of January 31, 2015, it operated 295 stores, including 122 stores in the Americas, 73 stores in the Asia-Pacific, 56 stores in Japan, 38 stores in Europe, 5 stores in the United Arab Emirates, and 1 store in Russia.
Take a look at the 1-year chart of Tiffany (NYSE: TIF) below with added notations: 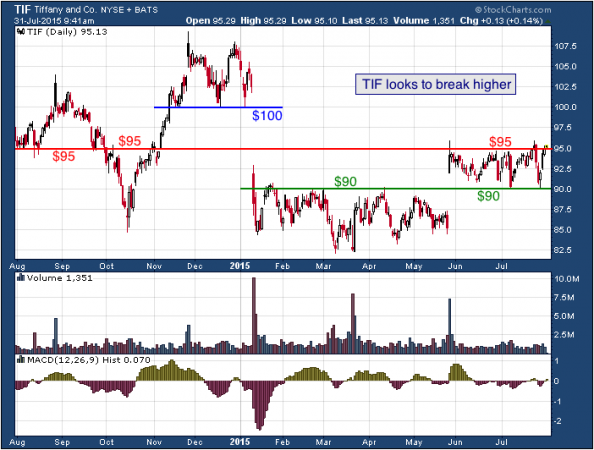 After a big drop in January, TIF started trading sideways over the following 4 months. The stock then jumped higher in May and has traded sideways, again, since. While in the most recent sideways move, the stock has formed a common pattern known as a rectangle. A minimum of (2) successful tests of the support and (2) successful tests of the resistance will give you the pattern.
TIF’s rectangle pattern has formed a resistance at $95 (red), which has also been key to the stock in the past, and a $90 support (green) that was a key resistance during TIF’s previous sideways move. At some point the stock will have to break one of the two levels, and if the $95 resistance breaks, traders should look for a run back up to the $100 level (blue).

The Tale of the Tape: TIF is trading within a rectangle pattern. The possible long positions on the stock would be either on a pullback to $90 or on a breakout above $95. The ideal short opportunity would be on a break below $90.
at 12:02 AM No comments: Links to this post