The Best Buying Opportunity the Market Has to Offer Right Now

On Tuesday, stocks opened lower due to weakness in Europe. But selling accelerated when Senate Majority Leader Harry Reid said that “little progress” had been made in the fiscal cliff negotiations. Despite some positive economic reports, the comments by Reid created an immediate reaction from sellers as the Dow fell 75 points within minutes of his announcement.
At Tuesday’s close, the Dow Jones Industrial Average was off 89 points at 12,878, the S&P 500 fell 7 points at 1,399, and the Nasdaq lost 9 points at 2,968. The NYSE traded 688 million shares and the Nasdaq crossed 406 million. On both exchanges, decliners were ahead of advancers by 1.3-to-1.

Click to Enlarge
Despite the emotional reaction of the markets to the back-and-forth comments from politicians, the CBOE Volatility Index (VIX) is still surprisingly apathetic. At a critical time when the major indices are backing away from their 200-day moving averages, the VIX should be in the mid-20s, while it sits near 16. Perhaps it is telling us that the politicians will get their act together before we all fall off the fiscal cliff.

My previous articles have mentioned the drought scenarios that are affecting the Midwest and the Southern Plains U.S. and potentially impact the current winter wheat and corn & soybean planting   next spring.  We have also been monitoring that this same drought scenario could impact long-term transportation issues for U.S grain and other commodity supplies as well as consumer prices.

The Mississippi River is very close to historical lows between the cities of St. Louis and Cairo, Ill.  Barge traffic is already mandated to have lighter loads than usual, and the middle of the river could be closed to barge traffic if the water level at St. Louis get under minus-5 feet.  The record low in St. Louis was minus-6.1 feet in January 1940, according to the National Weather Service.  The river was at minus-1.49 feet at 1:30 p.m. on Nov. 26, and may drop to minus-5 or even minus-6 feet as measured by the river gauge in about two weeks if the weather doesn't change and the Army Corps of Engineers drawdown of the Missouri River takes place as planned, according to a spokesman at U.S. North Central River Forecast Center in Chanhassen, Minnesota.

According to the U.S. Climate Prediction Center, the worst U.S. drought since 1956, which affected farmland from Ohio to Nebraska, will possibly last through February in most areas.  Mississippi River barges handle about 60 per cent of the nation's grain exports entering the Gulf of Mexico through New Orleans, as well as 22 per cent of its petroleum and 20 per cent of its coal.  According to AEP River Operations spokesman, approximately 8 million tons of grain, coal, steel, petroleum and other goods travel each month between St. Louis and Cairo.

Several business organizations including the National Association of Manufacturers, the U.S. Chamber of Commerce, and the American Petroleum Institute in a letter yesterday to President Barack Obama urged him to declare an emergency in the region, calling for "immediate assistance in averting an economic catastrophe in the heartland" of the U.S.

The below chart shows a better depiction of how bad this scenario is. 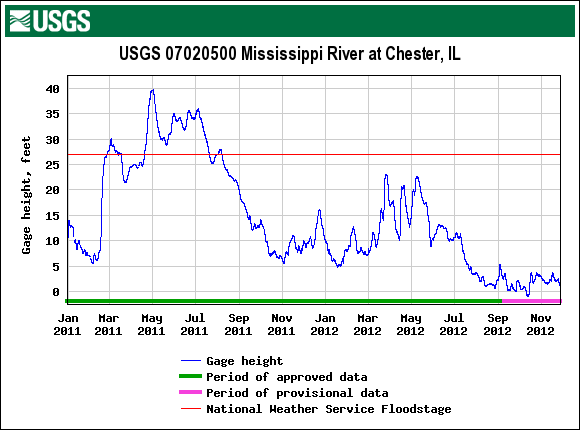 This graph shows the river stage at Chester, IL, from January 2011 to present. The river was actually above flood stage for much of May-July 2011. It dropped from almost 40 feet during that time to 5 feet in November 2011. Then it fluctuated between 5 and 25 feet, until this summer when it dropped below 5 feet and into negative numbers in late September. The latest forecast from the NWS has the river stage reaching -2 feet by December 10,  (more)
at 12:07 AM No comments:

Today James Turk spoke with King World News about steps which are being taken by the LBMA and Western central planners to cover up the corruption and manipulation in the gold and silver markets. This is the third and final in a series of interviews with James Turk which reveals what is going on behind the scenes of the desperate Western central bank gold and silver price suppression scheme.
Eric King: “You talked earlier about the fact that they tried to dematerialize gold back in 1969 with the SDR. Then in 1980 we saw the change of rules on the COMEX and the silver price collapsed. Going forward, these are the first steps you see (LBMA actions and attacking Indian gold demand) as a Ponzi scheme is unwinding. We should expect to see more radical things from the central planners?”
Turk: “Yes. That 1969 change has significance to today. It came just before the system blew up. The SDR was created in ’69 and the system blew up shortly thereafter (and gold went up roughly six-fold by the end of ‘73).”
James Turk continues @ KingWorldNews.com

To review Nordstrom's stock, please take a look at the 1-year chart of JWN (Nordstrom, Inc.) below with my added notations: 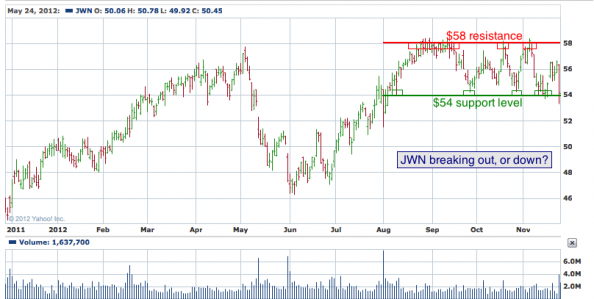 After a sever sell-off in May, JWN worked it's way back up to it's $58, 52-week high and has been consolidating within a rectangle ever since. Rectangle patterns form when a stock gets stuck bouncing between a horizontal support and resistance. A minimum of (2) successful tests of the support and (2) successful tests of the resistance will give you the pattern. For JWN, the rectangle pattern has formed a $58 resistance (red) and a $54 support (green). A break above $58 would also be a new 52-week high.
at 12:05 AM No comments:


About this week’s show:
-Getting worse before it gets better
-Redistribution begins
-What is Republic?

GLD, the New York Stock Exchange-listed gold exchange-traded fund, appears to have quietly removed key investor protection with the apparent agreement of United Kingdom regulators.
By imputation, the same change in regulation applies to the silver ETF SLV, though less obviously so.
A revision to GLD’s prospectus appears to have absolved its custodian and trustee from having to comply fully with the custody rules of the U.K. Financial Services Authority, a change that must have been undertaken with the agreement of the FSA and by implication the Bank of England, which oversees the London bullion market and is party to the London Code for Non-investment Products (the NIPS Code). This code now guides the actions of the management, trustees, and custodians of both ETFs.
SLV’s prospectus has not been materially altered in this respect (other than by the addition of New York as a custody location) because its wording is already consistent with NIPS Code guidelines. But GLD’s prospectus has changed.
Read More @ GATA,org

Chart of the Day - Unilever (UN)

The "Chart of the Day" is Unilever (UN), which showed up on Tuesday's Barchart "All-Time High" list. Unilever on Tuesday posted a new all-time high of 37.55 and closed +0.21%. Unilever closed near its daily low, which suggests that the stock market need to correct a bit lower before regaining some upside momentum. TrendSpotter just turned long on Tuesday. In recent news on the stock, UBS on Sep 14 upgraded Unilever to Buy from Neutral. Unilever, with a market cap of $105 billion, is one of the world's largest consumer products companies. They produce and market a wide range of foods, home, and personal care products.