Australian Banking system may not make it to Christmas

The troubles that have hit Australia's banking system in recent weeks reflect the deepening crisis in the global banking system, especially the eurozone, which prompted Lyndon LaRouche to warn on 8th December that the banks may not make it to Christmas.

The National Australia Bank's so-called "technical glitches", which threw Australia's financial payments system into disarray, coincided with revelations that NAB, along with Westpac, joined the rush of panicked banks in 2008 that borrowed desperately-needed emergency funds from the U.S. Federal Reserve.

It also coincided with the shockwaves in European bond markets set off by the Irish crisis—Australia's banks were estimated back in May to have a $56 billion exposure to the eurozone, and NAB was until recently directly involved in two Irish banks and also had a sizeable exposure to the steadily collapsing Italian government bonds. (To top it off, NAB's exposure to the toxic derivatives bubble skyrocketed in the last year to $3.476 trillion, up $457 billion in just the last year!—by far the most exposure of any Australian bank.) (more) 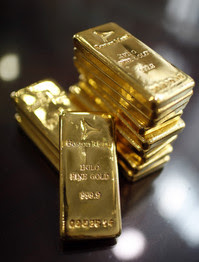 Precious metals will probably give investors the best returns among commodities in the next year, and livestock the worst, Goldman Sachs Group Inc. said.

Precious metals will advance 28 percent over 12 months and livestock 4 percent, London-based Jeffrey Currie, Allison Nathan and other Goldman analysts said in a report today. The team raised its 12-month forecast for the S&P GSCI Enhanced Total Return Index to 18 percent from 16 percent, mostly because of changes to agricultural estimates.

“Extreme weakness in U.S. demand over the past two years has allowed China to grow unconstrained without any competition for raw materials,” the Goldman analysts said in the report. “This is likely to change in 2011 with a stronger U.S. that is likely to bump up against a China that is consuming dramatically more commodities than pre-crisis.”

Commodity assets under management rose $19 billion to a record $340 billion in October, led by demand for index-linked investments, Barclays Capital said in a report last month. Gold rose 27 percent this year, heading for a 10th consecutive annual advance. Investors are seeking hard assets as governments and central banks led by the Federal Reserve pump more than $2 trillion into the world financial system. (more)

The U.S. Is Well On Its Way To Being In A Debt Trap 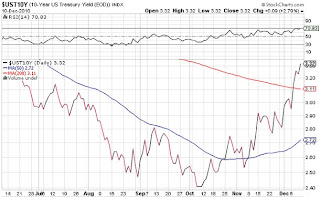 Commentary of economists Rogoff and Reinhart is often used as a point of reference concerning thresholds of debt levels that trigger a debt trap. After the publication of their book on the topic, there were rebuttals from the debt-doesn’t-really-matter crowd.

For those who argue it does matter, one number being tossed around is the level at which debt service equals 30 percent of tax revenues. Once interest payments take 30% of tax revenues, a country has an out-of-control debt trap issue. When you think clearly about it, this just makes sense, as the ability to dodge, weave and defer is pretty much removed, as is the logic that it will be repaid in a low-risk manner. The world is going to be a different place when the US is perceived to be in a debt trap.

I suspect the problem will rear its ugly head well before this 30% number is hit, as markets start discounting the trajectory by hiking interest rates because of poor credit quality and/or inflation (or more accurately stranguflation). Naturally that question should be asked in terms of the recent and sudden uptick in Treasury note and bond rates that appeared strongly correlated to the latest round of tax “stimulus” and handouts, and the “unexpected” reaction to QE2. The latter is nothing more than a brazen, dangerous gamble to monetize the debt. Sure the BS crowd is claiming economic growth is the causa proxima, but that feels like utter nonsense. Could it be that the markets at long last are anticipating a very bad result from QE2 and even more Gumnut largess? (more)
at 12:19 AM No comments: Links to this post

On the third Wednesday of every month, the nine members of an elite Wall Street society gather in Midtown Manhattan.

The men share a common goal: to protect the interests of big banks in the vast market for derivatives, one of the most profitable — and controversial — fields in finance. They also share a common secret: The details of their meetings, even their identities, have been strictly confidential.

Drawn from giants like JPMorgan Chase, Goldman Sachs and Morgan Stanley, the bankers form a powerful committee that helps oversee trading in derivatives, instruments which, like insurance, are used to hedge risk.

In theory, this group exists to safeguard the integrity of the multitrillion-dollar market. In practice, it also defends the dominance of the big banks.

The banks in this group, which is affiliated with a new derivatives clearinghouse, have fought to block other banks from entering the market, and they are also trying to thwart efforts to make full information on prices and fees freely available. (more)

In an era where forecasts by permabears have gotten ample attention and vindication, few are as disturbing as this: a world recession until 2018.

It comes from Eisuke Sakakibara, Japan’s former top currency official. He is known as “Mr. Yen” for his ability to move markets. Because Tokyo’s revolving-door politics often sends a new face to each Group of 20 meeting, he is one of the few Japanese constants in market circles. Traders may not know the latest finance minister’s name, but they know Sakakibara.

Japan is the master of muddling along, decade after decade, with little growth to show for it. And Sakakibara was a key player when Japan faced everything from the Asian crisis to Russia’s default to the onset of deflation to a banking collapse that saw the demise of Yamaichi Securities Co.

So, when an economist with Sakakibara’s background says “the world is set for a long-term structural slump reminiscent of the 1870s” when average global annual growth was about 1 percent, I can’t help but listen. The reason for the slowdown? Governments are putting fiscal austerity ahead of restoring stable growth. (more)

Gold May Beat Silver, Lifting Ratio by as Much as 20%: Technical Analysis 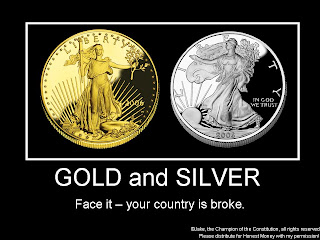 Gold may outperform silver, lifting the ratio between the two metals by as much as 20 percent, according to technical analysis by Societe Generale SA.

The attached chart shows the ratio of gold to silver steadied after dropping as low as 46.6 last week, near a two- year channel support line and the lows of 2008 and 1999. The second chart shows the ratio may climb to between about 56 and 58, which are retracement levels of the decline from June that are singled out in so-called Fibonacci analysis.

“The gold-silver ratio reached an important support at 47.5/46,” said Stephanie Aymes, a cross-commodity technical analyst with Societe Generale in London. “Gold will outperform silver to 56/58.”

An ounce of gold bought as little as 46.6 ounces of silver in London on Dec. 7, the least in almost four years. Precious metals gained this year on demand for a protection of wealth and an alternative to currencies. Some investors betting that silver may benefit from an economic recovery pushed the metal’s 2010 advance to 70 percent, outperforming gold’s 26 percent gain. Silver is used more in industry than gold. (more)

Market alarm as US fails to control biggest debt in history 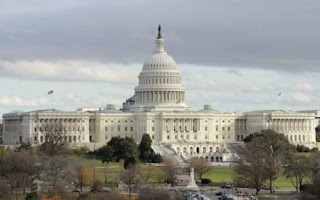 US Treasuries last week suffered their biggest two-day sell-off since the collapse of Lehman Brothers in September 2008. The borrowing costs of the government of the world’s largest economy have now risen by a quarter over the past four weeks.

Such a sharp rise in US benchmark market interest rates matters a lot – and it matters way beyond America. The US government is now servicing $13.8 trillion (£8.7 trilion) in declared liabilities – making it, by a long way, the world’s largest debtor. Around $414bn of US taxpayers’ money went on sovereign interest payments last year – around 4.5 times the budget of America’s Department of Education.

Debt service costs have reached such astronomical levels even though, over the past year and more, yields have been kept historically and artificially low by “quantitative easing (QE)” – in other words, Federal Reserve Chairman Ben Bernanke’s virtual printing press. Now borrowing costs are 28pc higher than a month ago, with the 10-year Treasury yield reaching 3.33pc last week, an already eye-watering debt service burden can only go up. (more) 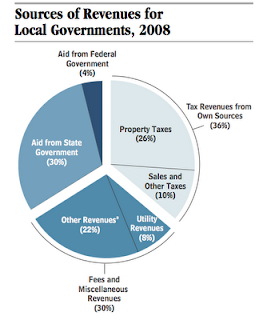 You hear a lot about the states that are facing a financial wall. California, NY and Il are on top of the list. But that is a 2010 story. The 2011 story will shift toward the nations municipalities. There are 36,000 cities, towns, villages and boroughs across the land. They all are facing problems. This chart from the CBO (pdf LINK) describes the problem:

As you can see the local munis get the lions share of their revenue from three sources; direct payments from the State (30%), local property taxes (26%) and other revenues (22%). A total of nearly 80% of the muni revenue stream is now suspect.

If you are living in a hard up municipal area (who isn’t?) you know that the fees you pay for everything has increased in the last year or so. Building permits, licensing fees, transportation fees, library cards, speeding and parking tickets, you name it have all doubled. There is a limit to this. I think it has already passed. Nickel and diming residents and having the cops turned into a revenue source is just not going to fly much longer. We are at the point where if some town wants to raise the price for garbage collection they are going to run into a wall. Don’t look for this source of revenue to bail out the munis in 2011. (more)
at 12:11 AM No comments: Links to this post 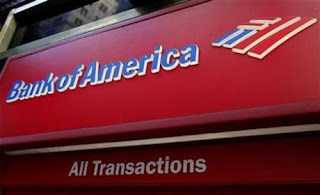 n">(Reuters) - Bank of America Corp has put up for sale at least $1 billion worth of toxic mortgage assets, the New York Post said on Monday, citing sources.

Bids are due by the end of December for the assets, which includes already written-off loans and mortgage-servicing rights, the paper said.

The asset sale is part of a larger effort by the bank to unwind a trove of assets in the wake of the purchases of Countrywide Financial and Merrill Lynch, the Post said.

Bank of America declined to comment to the New York Post. The company could not be immediately reached for comment by Reuters outside regular U.S. business hours. 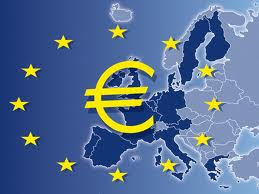 There will be no Eurobond, no increases in the EU’s €440bn (£368bn) rescue fund, and no mass purchases of Spanish and Italian bonds by the ECB. Nothing. The system is politically and constitutionally paralysed. Spain and Portugal will be left nakedly exposed before their funding crunch in January.

It is entirely predictable that Angela Merkel and Nicolas Sarkozy would move so quickly to shoot down last week’s Eurobond proposal, issuing pre-emptive warning before this week’s EU summit that they will not accept “a bundling together of all Europe’s debts”.

How can Germany or France agree lightly to plans that amount to an EU debt union, with a common treasury, tax system, and budget policy, the stuff of civil wars and revolutions over the ages? To do so is to dismantle the ancient nation states of Europe in all but name. (more)