Side effect of the new frugality: Happiness

She had so much.

Yet Tammy Strobel wasn’t happy. Working as a project manager with an investment management firm in Davis, Calif., and making about $40,000 a year, she was, as she put it, caught in the “work-spend treadmill.”

So one day she stepped off.

Inspired by books and blog entries about living simply, Ms. Strobel and her husband, Logan Smith, both 31, began donating some of their belongings to charity. As the months passed, out went stacks of sweaters, shoes, books, pots and pans, even the television after a trial separation during which it was relegated to a closet. Eventually, they got rid of their cars, too. Emboldened by a Web site that challenges consumers to live with just 100 personal items, Ms. Strobel winnowed down her wardrobe and toiletries to precisely that number.(more)

The Atlantic,
Mysterious and possibly nefarious trading algorithms are operating every minute of every day in the nation's stock exchanges.

What they do doesn't show up in Google Finance, let alone in the pages of the Wall Street Journal. No one really knows how they operate or why. But over the past few weeks, Nanex, a data services firm has dragged some of the odder algorithm specimens into the light.

The trading bots visualized in the stock charts in this story aren't doing anything that could be construed to help the market. Unknown entities for unknown reasons are sending thousands of orders a second through the electronic stock exchanges with no intent to actually trade. Often, the buy or sell prices that they are offering are so far from the market price that there's no way they'd ever be part of a trade. The bots sketch out odd patterns with their orders, leaving patterns in the data that are largely invisible to market participants. (more)

When Will Financial Armageddon Begin? 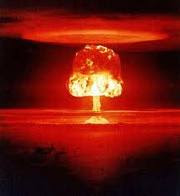 A little more than two years ago, economist John Williams of shadowstats.com predicted a “severe recession” was coming and soon. At the time, I was working as an investigative correspondent for CNN. I interviewed Williams for a story about the coming financial crisis. Most so-called experts, at the time, did not see the financial meltdown coming, let alone that all the banks were in trouble. Williams’ assessment of the economy was spot on in 2008. I don’t see how you can characterize what we have now as anything but a “severe recession.” Accurate information is the first and foremost reason to use someone as a source when you are a journalist. In my experience, what I have gotten from Williams has been stellar. (Click here for the 2008 CNN story featuring Williams and his predictions for the President in 2012.) (Click here for shadowstats.com)

Williams also predicted 2 years ago we would have a “hyperinflationary depression” within 10 years. Then, about a year ago, he revised his prediction and narrowed the window to “five years.” The day before last Friday’s dismal jobs report, Williams said, “. . . the timing of the looming U.S. financial Armageddon is coming into better focus, with increasingly high risk of it breaking within the next six months to a year.”

“Financial Armageddon . . . within the next six months to a year.” I called Williams to see why the odds of calamity have accelerated. He told me on the phone last night, “What is happening now to bring the timing into focus is the economy IS turning down. It is no longer the perspective the economy is going to turn down. That, in turn, will eventually trigger all the problems with the dollar, the debt and the deficit.” (more)
at 12:23 AM No comments: Links to this post

The recent annual gathering of financial movers and shakers known as a “Shadow Fed” produced some predictions of a sovereign default in Europe.

It also produced a consensus forecast that Republicans will regain control of the House of Representatives this November.

The Maine confab is hosted by Cumberland Advisors money management firm and was attended by 41 heavyweights in the financial community this year.

Of the 26 participants in the group’s survey, four expected at least one European country to default or reschedule its debt payments in the next year, according to a commentary about the meeting written by Cumberland Chairman David Kotok that appeared on various media outlets. (more)
at 12:22 AM No comments: Links to this post 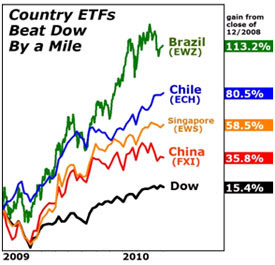 Martin here with a quick update on foreign markets.

One year ago, in our 2009 Global Forum, we forecast a massive shift of wealth — from the United States, bogged down with huge deficits and chronic, long-term unemployment … to emerging markets, enjoying the most rapid growth on the planet.

Now, that shift is in full swing …

Since the beginning of 2009, despite the biggest government bailouts and stimulus of all time, the Dow Jones Industrial Average is up only 15.4 percent. 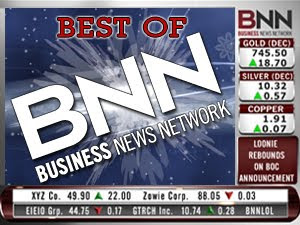 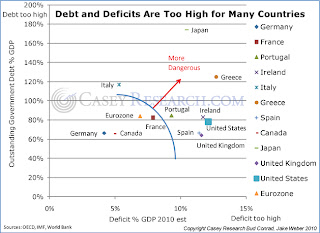 A couple weeks ago, the family and I watched Dirty Jobs, an altogether entertaining show from the Discovery Channel. In the episode we watched the host, Mike Rowe, serve as a mechanic in the military. There were a couple of things that caught my eye.

The first was that, using nothing more than a cleverly arranged array of blocks and tackle, five members of the mechanics group were able to easily muscle a well-stuck 5-ton Humvee from deep sand. We humans are, indeed, a creative and intelligent species.

The second thing was the strict adherence to protocol, with everyone acting almost robotic in their issuance of commands and responses, and surgical in their use of equipment. Even so, this slavish adherence to “the book” is understandable, given that the soldiers operate in extremely difficult, dangerous, and often chaotic circumstances.

Therefore, I had to raise an eyebrow the next day. when BBC reported that of $9 billion allocated to the U.S. military to be used in Iraq reconstruction projects, fully $8.7 billion has gone missing. Proving, once again, that no matter how well plans are laid or how tightly “management” might think they are controlling things, gaps in process can open up that are wide enough to drive a Humvee through – a Humvee full of cash, in this particular case. (more) 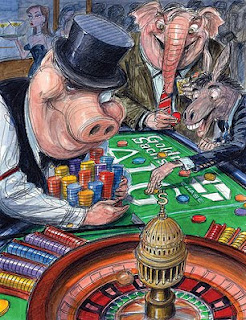 Obama's speech introducing the massive law brimmed with celebratory finality. He threw around lofty phrases like "never again" and "no more." He proclaimed the end of unfair credit-card-rate hikes and issued a fatwa on abusive mortgage practices and the shady loans that helped fuel the debt bubble. The message was clear: The sheriff was padlocking the Wall Street casino, and the government was taking decisive steps to unfuck our hopelessly broken economy. (more) 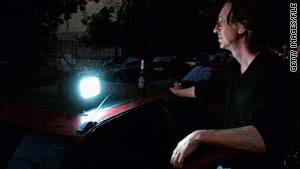 So, authorities followed Molinaro's suggestion to cancel that night's Little League games, which were to be played under electricity-sucking stadium lights.

"Number one, it was a danger to the children that were playing out there in that heat, and secondly it would save electricity that people would need for air conditioning in their homes," said Molinaro, who'd been forced to sleep at his office that night because of a blackout in his own neighborhood. (more) 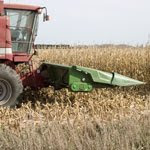 In 1972, Russia’s wheat crop failed. Russia had to dip into the global grain markets to meet demand. Before Washington knew the plight of its Cold War adversary, Russia bought up all of the surplus wheat in the US. Dubbed “The Great Grain Robbery,” Russia’s purchases sent grain prices soaring around the world.

Some of the old traders are wondering if it’s happening all over again.

On Thursday, wheat prices hit $7.25 a bushel, a 71% increase since the June low. It’s the biggest one-month jump in three decades. The last time prices got this high was during the food crisis in 2008. (Wheat prices topped out at $13 then.) You may recall the ensuing food riots across the globe from Haiti to Egypt to Bangladesh.

Russia is again the center of attention. The worst heat wave and drought in a century has baked crops to a crisp in Russia, Ukraine and Kazakhstan. These three are among the biggest exporters of wheat in the world. They provide critical food supplies to the largest importing regions in the world – the Middle East and North Africa. (more)

Alex welcomes back to the show Gerald Celente, a trend forecaster, publisher of the Trends Journal, business consultant and author who makes predictions about the global financial markets and other events of historical importance. Celente's accurate forecasts include the 1987 stock market crash, the collapse of the Soviet Union in 1991, the 1997 Asian currency crash and the 2007 subprime mortgage crisis. He is the author of Trend Tracking: The System to Profit from Today's Trends and Trends 2000: How to Prepare for and Profit from the Changes of the 21st Century. Alex covers the latest news and also takes your calls. click here for audio
at 12:05 AM No comments: Links to this post