China's Christmas Present To The World: Another Interest Rate Hike

Following Friday's failed 3 Month Bill auction, things in China are once again getting interesting, just as the rest of the world has decided to sleep right into 2011. The PBoC, in a surprise move, hiked its lending and deposits rates by 0.25%, the second time the bank has done so since October 19, when its then-raise was the first in 3 years. And by all accounts the PBoC is not done: consensus is for three 25 bps moves by the end of 2011: that the PBoC is starting early may be an indication that the country is starting to seriously worry about its soft landing prospects. Yet one thing that is certain is this move cements the CNYUSD peg: despite all the rhetoric, China will keep the currency peg come hell or high water, as it eliminates any monetary trump card Bernanke may have (just as Germany loves being part of the EUR which has such insolvent countries as all PIIGS members backing up the rear). What is unclear is whether the PBoC has now decided to avoid the RRR hike path as the preferred approach to combating inflation. It is assumed that his action will have a soothing impact on the Chinese 7 and 30 Day Repo rates come Monday, as else more failed bond auctions are certain to be in store for Shanghai in 2011.

From the just released PBoC statement:

And the biggest irony is that as China turns off the liquidity spigot, and the hot money follows the path of least resistance in a world of connected liquidity vessels, we expect that commodity prices in the US will jump that much higher, as the speculators slowly abandon the SHCOMP and related exchanges and bring their full sound and fury on fertile for manipulation US soil.

Chart of the Day: Market Bullishness 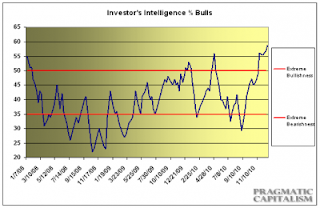 The KWN Weekly Metals Wrap - We have added new segments to the KWN Weekly Metals Wrap covering gold, silver, trading and a plethora of other factors affecting the precious metals markets. I am giving King World News listeners globally access to what has long been my secret weapons in researching where gold and silver are headed directionally along with the COT Report. We Cover the Commitment of Traders Report in detail as well as a number of other factors which can influence the gold and silver market price action. (click here for audio)

1. The U.S. will implement QE3/4 when the $600 billion of QE2 is not enough (already it is not enough as admitted by the Fed's chairman Benjamin Shalom Bernanke recently on CBS' 60 Minutes). Except it won't be called as such in the lamestream media. QE3/4 will be in the trillions of U.S. dollars (USD) of quantitative easing, i.e., fake digital money printing from the Fed to sop up unwanted U.S. Treasuries. The unstated and ONLY purpose of QE2 and QE3/4 is to buy up all of the U.S. Treasury debts that the foreign nations are beginning to refuse to buy while they are quietly dumping what they possess on the U.S. and world markets in exchange for real and tangible assets and resources.
2. The major export nations like China, Russia, Brazil, India, Argentina, and others will engage in and increase their non USD-denominated trading among themselves, as exemplified by the recent China-Russia trade agreements whereby they would start trading in Rubles and Yuans, and not use USD as is typically transacted in international trades for commodities and oil. This will put increasing devaluation pressures on the USD. So, look forward to the US Dollar Index to drop further from the low 80s now to the low 70s or even lower in 2011.
3. Retail food prices in the U.S. will increase in the low to medium DOUBLE digit ranges (10% to 40%) for everything from the junk/GMO "foods" served by corporations like McDonald's to healthy/organic foods supplied by companies like Whole Foods Market. This will take place noticeably in the first half of 2011. (more) 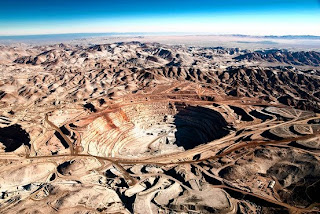 As commodity prices soar to new records, the ability of a few traders to hold huge swaths of the world's stockpiles is coming under scrutiny.

The latest example is in the copper market, where a single trader has reported it owns 80%-90% of the copper sitting in London Metal Exchange warehouses, equal to about half of the world's exchange-registered copper stockpile and worth about $3 billion.

The report coincided with copper prices reaching record highs Tuesday. Commodities prices rallied along with stocks. The Dow Jones Industrial Average gained 55.03 points, or 0.5%, to 11533.16, its highest level since August 2008. Crude oil jumped to its highest level in more than two years and topped $90 a barrel in late electronic trading in New York. Corn and soybeans rose amid worries about hot weather in Argentina. (more)

Royal Nickel, a company led by a group of former Inco executives, is working to cash in on rising commodity prices by developing a large nickel project near Amos, Quebec.

The Inco boys are back!

Three years after the venerable Canadian nickel mining giant was swallowed by Vale SA (NYSE: VALE, Stock Forum) of Brazil, a group of former Inco executives are working to cash in on rising commodity prices by developing the Dumont nickel deposit in Quebec, at a projected cost of around $2 billion.

This effort is being led by Scott Hand, the 68-year-old ex Inco chief executive officer, who two years ago agreed to become executive chairman of Royal Nickel Corp.(TSX: T.RNX, Stock Forum), the Toronto company that owns 100% of the project.

He is working with a management team that includes former Inco marketing vice-president Peter Goudie, and Tyler Michelson, who was a vice-president and business strategist at Inco.

Mitchelson is now President and chief executive officer at Royal Nickel, which recently raised $45 million from an initial public offering that will be used to finance metallurgical test work and mine feasibility studies.

"We do have a couple of former Falconbridge people there too," said Hand, referring to the fact that Alger St-Jean, a former senior geologist at Falconbridge, is now vice-president of exploration at Royal Nickel. Falconbridge was Canada's second largest nickel miner, behind Inco, before it was acquired by Xstrata PLC in 2006. (more)