Back on December 19, 2012, I wrote that investors shouldn't be overly concerned about excessive insider selling (see No need to panic over insider selling):


There are a couple of one-off reasons that could account for the flurry of insider sales:

Assuming that the Mayan Apocalypse doesn't happen this Friday (here is one way you hedge the end of the world), there is no need to panic just yet. Explanation #2 is a perfectly plausible reason for the rash of insider activity as 2012 draws to a close. In that case, I would wait for the insider activity data in January to see if insiders are indeed selling because of deteriorating corporate fundamentals, or for tax related reasons.

Now that we are into 2013 and any possible tax related selling is out of the way, we have an update on insider activity from Vickers - and it's bad news for the bulls. The ratio of insider sales to buys has surged from 6.67 to 1 in December, which was already at levels for bulls to be concerned, to over 9 to 1 today, according to this CNBC report [emphasis added]:

"In almost perfect coordination with an equity market that was rushing toward new all-time highs, insider sentiment has weakened sharply — falling to its lowest level since late March 2012," wrote David Coleman of the Vickers Weekly Insider report, one of the longest researchers of executive buying and selling on Wall Street. "Insiders are waving the cautionary flag in an increasingly aggressive manner."

There have been more than nine insider sales for every one buy over the past week among NYSE stocks, according to Vickers.

The Vickers data indicated a highly bearish outlook for equities:

Looking at a longer time frame paints a bearish picture as well. The eight week sell-buy ratio from Vickers stands at 5-to-1, also the most bearish since early 2012. What's more, the last time this ratio was at these levels was June 2011, just before another correction in the stock market took place.

I have been increasingly cautious, at least tactically, in the past few weeks (see Stocks cruisin' for a bruisin', More overbought warnings from BoAML and Is the whole world bullish?). This latest data point from Vickers about insider activity just serves to confirm my near-term bias.

While the rest of the developed world is scrambling here and there, politely prodding its central bankers to destroy their relative currencies, all the while naming said devaluation assorted names, “quantitative easing” being the most popular, here comes Venezuela and shows the banana republics of the developed world what lobbing a nuclear bomb into a currency war knife fight looks like:
And that, ladies and gents of Caracas, is how you just lost 46% of your purchasing power, unless of course your fiat was in gold and silver, which just jumped by about 46%. And, in case there is confusion, this is in process, and coming soon to every “developed world” banana republic near you.
Read More @ Zero Hedge.com 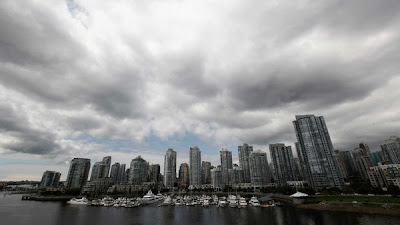 Desperate times demand desperate measures. When Jordan and Russ Macnab, estate agent brothers in Vancouver, Canada, had a glamorous single-bedroom apartment, priced at over C$600,000, that was stubbornly refusing to sell, they decided on a marketing innovation: the “crib crawl”.

They rented a limo bus, stocked it with drinks and snacks, and took a party of possible buyers on an evening tour to see the apartment in question and about half a dozen others, in a mobile viewing party.

The experiment was not a complete failure: the Macnabs attracted a lot of interest, and are developing a television series based on their idea. They are planning their second crib crawl next month.

As a way to shift slow-moving inventory, however, it was a flop. Not one of the apartments they showed found a buyer. Vancouver, which until last year had Canada’s strongest growth in house prices, is now its weakest region. The number of homes sold in the greater Vancouver area dropped by 23 per cent last year.

“It’s a bit of a stalemate at the moment,” says Jordan Macnab. “Buyers are waiting for it to crash, and sellers don’t want to give it up.”

The lack of buyers is sobering evidence that Canada’s housing boom, which began in 2000 and bounced back to life after the financial crisis of 2008-09, is now over. (more)

Robert Shiller of Yale was on Bloomberg yesterday discussing housing and his general outlook. But the most interesting comments were with regards to his general view of housing as it pertains to your overall portfolio. Shiller said that investing in housing was a “fad” and not a great historical investment. Of course, if you’re familiar with his long-term real returns chart  (see the chart in #9 here) housing generally generates returns that are in-line with inflation. US residential real estate just isn’t a great investment in real terms. Shiller explains why:

“Housing is traditionally is not viewed as a great investment. It takes maintenance, it depreciates, it goes out of style. All of those are problems. And there’s technical progress in housing. So, the new ones are better….So, why was it considered an investment? That was a fad. That was an idea that took hold in the early 2000′s. And I don’t expect it to come back. Not with the same force. So people might just decide, ‘yeah, I’ll diversify my portfolio. I’ll live in a rental.’ That is a very sensible thing for many people to do.  (more)

‘Facing’ the Portfolio Allocation Decision?
by James Paulsen, Chief Investment Officer, Wells Capital Management
Perhaps no other event has shaped the post-war investment environment more than the two faces of the bond market. Shortly after WWII, U.S. bond yields began a slow but steady advance spanning more than 30 years and climaxing with a surge in bond yields in the late 1970s never before seen in U.S. history. This was followed by an equally dogmatic secular decline in bond yields, also lasting more than three decades, which last year saw the 10-year Treasury bond yield decline to a post-war record below 1.5 percent! Investors are already pondering the future face the bond market. With a current 10-year Treasury yield of only about 2 percent, they can no longer depend, as they have for decades, on a persistent decline in bond yields. Who knows what the new face of the bond market will be? Yields could remain rangebound at very low levels. Perhaps they will bounce higher and then trend sideways. Or, maybe bond yields will begin another secular climb.

The World According to Monsanto


Monsanto is a world leader in industrial agriculture, providing the seeds for 90 percent of the world’s genetically modified crops. Once a chemical company based in the US, Monsanto has transformed into an international life sciences company, aiming to solve world hunger and protect the environment.
Filmmaker Marie-Monique Robin, however, exposes the company’s troubling past, in her recent film, The World According to Monsanto. In an interview with The Real News Network, she discusses Monsanto’s controversial practices from a producer of PCBs and Agent Orange to genetically modified seeds and related herbicides.
Starting from the Internet over a period of three years Robin has collected material for her documentary, going on to numerous interviews with people of very different backgrounds. She traveled widely, from Latin America, to Asia, through Europe and the United States, to personally interview farmers and people in influential positions.
As an example of pro-Monsanto interviews, she talked at length with Michael Taylor who has worked as a lawyer for Monsanto and also for the Federal Drug Administration (FDA), where he had great influence on the legalization of the genetically modified bovine growth hormone (BGH). It also became FDA policy during Taylor’s tenure that GM seeds are declared to be “substantially equivalent to non-GM seeds, hence proclaiming proof of the harmlessness of GMs to be unnecessary. Michael Taylor is a typical example of technocrats employed via ‘the revolving door policy’. He is now head of the Washington, D.C. office of Monsanto Corporation.

John Williams: How to Survive the Illusion of Recovery

There is no economic recovery, and there are no signs that a recovery is coming, says Shadowstats.com author John Williams. In this Gold Report interview, he blames mal-adjusted inflation statistics for creating an alternate reality that overestimates economic activity in a way that is unsustainable. Williams warns that eventually the painful truth will be so difficult that even government manipulation won’t be able to deny it and that is when hyperinflation will take its toll on those who have not taken his advice for preserving purchasing power and securing wealth.
The Gold Report: The last few years have been very volatile for investors, particularly resource equity investors. The mainstream media, citing government statistics of improved employment rates and housing starts, called an end to the recession and is forecasting a slow recovery in 2013. You are looking at the same indicators, but coming up with different numbers. Let’s start with the unemployment rate. What are you seeing and why is it different than what we are hearing everywhere else?
John Williams: I contend that the economy effectively hit bottom in June 2009, followed by a period of somewhat volatile stagnation, and it is beginning to turn down anew. There never was a recovery and no economic data shows the type of recovery that the official gross domestic product (GDP) report is showing. The GDP shows levels of activity now that are above where the economy was before the recession. It’s been above that level now for more than a year. No other major economic series has shown a full recovery, shy of perhaps inflation-adjusted retail sales, which is due to a problem with the inflation rate used to adjust the series. Generally, the illusion of recovery has resulted from the government’s use of understated inflation.
Continue Reading at TheAuReport.com…