IAG Has A 5.67% Yield And Sells For Less Than Book 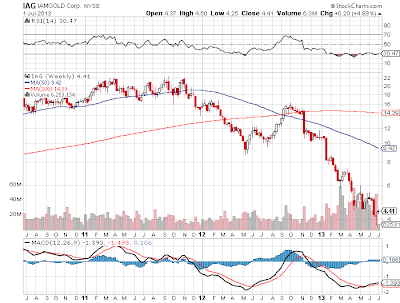 IAMGold Corp (NYSE: IAG) has been named as a Top 5 dividend paying metals and mining stock, according to Dividend Channel, which published its weekly ”DividendRank” report. The report noted that among metals and mining companies, IAG shares displayed both attractive valuation metrics and strong profitability metrics. For example, the recent IAG share price of $4.41 represents a price-to-book ratio of 0.4 and an annual dividend yield of 5.67% — by comparison, the average metals and mining stock in Dividend Channel’s coverage universe yields 2.9% and trades at a price-to-book ratio of 1.6. The report also cited the strong dividend history at IAMGold Corp, and favorable long-term multi-year growth rates in key fundamental data points.

The report stated, ”Dividend investors approaching investing from a value standpoint are generally most interested in researching the strongest most profitable companies, that also happen to be trading at an attractive valuation. That’s what we aim to find using our proprietary DividendRank formula, which ranks the coverage universe based upon our various criteria for both profitability and valuation, to generate a list of the top most ‘interesting’ stocks, meant for investors as a source of ideas that merit further research.”

The annualized dividend paid by IAMGold Corp is $0.25/share, currently paid in installments, and its most recent dividend ex-date was on 07/01/2013. (more)

Dollar Stores are Rising With the Dollar

The dollar stores rebounded significantly from their November through March Base, but recently have been either stalled or pulling back. That is now changing. Take a look at Dollar General, $DG. After pulling back to the 200 day Simple Moving Average (SMA) to start June, it has been building an ascending triangle since. Monday it tried to peek over the top but failed. But it looks to have some support to get there. The Relative Strength Index (RSI) is trending higher and the Moving Average Convergence Divergence indicator (MACD) is also turning up and crossed to positive. The Measured Move on the break higher takes it to 56.40. 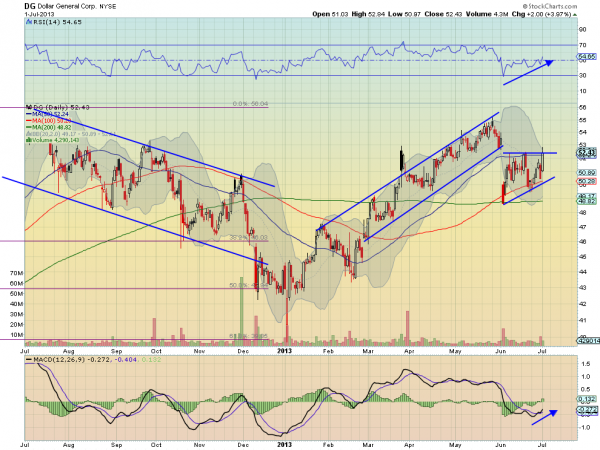 And Dollar Tree, $DLTR, is just as good. In fact it is breaking resistance of an ascending triangle that formed with the 50 day SMA as the base Monday. The Measured Move takes it higher to 55. The RSI is running higher and bullish and the MACD is turning up. 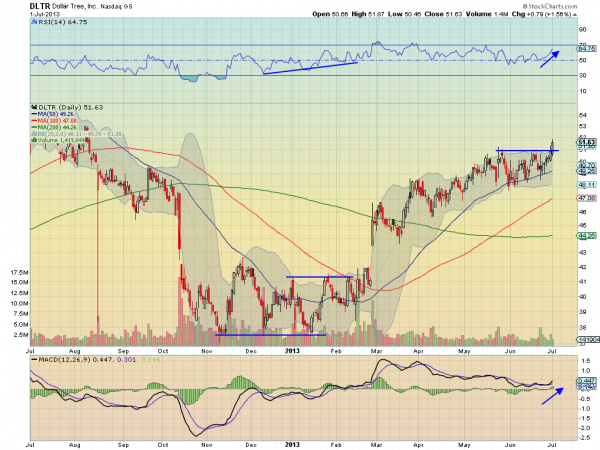 Somebody Is Messing With The Gold Market

By Addisson Wiggins
Forbes
“Zero Hour” is what I call the moment when the price of real, physical gold starts to break away from the quoted price on the commodities exchanges. That is, the “physical price” becomes much higher than the “paper price” on CNBC’s ticker. The catalyst would likely be when a major metals exchange defaults on a gold or silver contract, settling in cash, instead of metal. 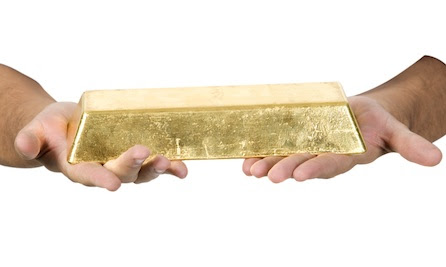 To be clear, this did not take place when gold’s paper price plunged $150 in only two trading days, Friday, April 12, and Monday, April 15. What happened after that plunge hints at what the aftermath of Zero Hour would look like. The Chinese Gold and Silver Exchange nearly ran out of bullion on Friday, April 19. There were reports of a “massive wave of physical gold buying” in Dubai, and monthly sales of U.S. Gold Eagles fell just short of a 26-year high during April.
If you wanted real metal, you paid a substantial premium over the paper price. In silver, these premiums were off the charts. On Thursday, April 25, spot silver was $23.94, but a Silver Eagle from a major online dealer would set you back $29.54, as high as the paper price before the mid-April crash.
Meanwhile, the premium on “junk silver” (U.S. dimes, quarters and half-dollars dated before 1965) sits at four-year highs, according to coin dealer Richard Nachbar. Usually, these coins trade at a small discount to the paper price of silver. Now? As the chart nearby shows, they fetch a 17% premium over spot, and that’s wholesale.
If you’re still skeptical that “Zero Hour” is a real possibility, there’s new and compelling evidence. Sprott Asset Management chief Eric Sprott believes Zero Hour is made inevitable by Western central banks “leasing” their gold to commercial banks at less than 1% a year. The commercial banks then sell that gold and plow the proceeds into higher-earning investments.
“Now,” Sprott writes in a new white paper, “our long search for the ‘smoking gun’ to prove our hypothesis appears to have finally materialized.”
The evidence lies in the monthly trade data from the Census Bureau. The December 2012 report revealed net gold exports of $2.5 billion, almost 50 tonnes. This staggering number prompted Sprott and his team to dig through the figures as far back as they exist, all the way to 1991. The data show that net exports from 1991-2012 totaled 5,504 tonnes.
Here’s the problem: During that same period, U.S. supply mine production and recycling totaled 7,532 tonnes, while demand was 6,517 tonnes. That left only 1,015 tonnes available for export. Where did the other 4,489 tonnes come from?
“The only U.S. seller that would be capable of supplying such an astonishing amount of gold,” says Mr. Sprott, “is the U.S. government, with a reported gold holding of 8,300 tonnes.”
“In this context,” says our friend and Crash Course author Chris Martenson, “the gold slam begins to smell like an operation designed to shake as much gold as possible out of weak hands so that the bullion banks can begin to recover it to square up their accounts. GLD, the gold ETF that so many small investors participate in, is one large, obvious target,” he adds, “as it was sitting on 1,350 tonnes as of January 2013.” By the end of April, more than 250 tonnes of that total were gone.
“I don’t even look at gold as gold anymore, they securitized it,” CNBC’s voluble Rick Santelli said on March 27, weeks before the big beat-down.
The endgame is getting closer. “What I believe is going to happen, probably in the not too distant future,” says Eric Sprott’s right-hand man John Embry, “is that the pricing mechanism of the gold and silver markets will swing to the physical market, which cannot be manipulated, because, basically, either you’ve got it or you haven’t.”
Please share this article
at 12:04 AM No comments: Links to this post

Record leverage prompts dash for cash out of everything else

A Flag and a Breakout for Tesla Motors TSLA

Tesla Motors (TSLA) shares continued their strong uptrend today with a breakout from a triangle pattern or a daily Bull Flag to push to all-time highs.
Let’s take a look at the Daily Chart, note the trend, and then highlight the lower frame patterns and levels to watch. 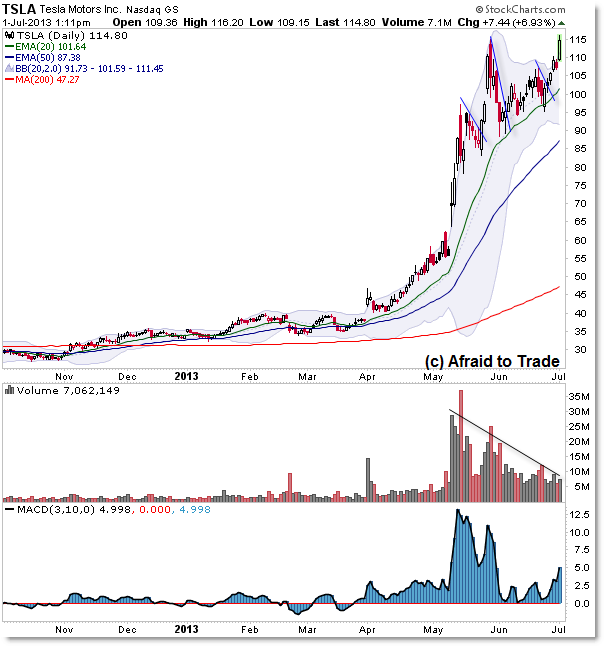 The Daily Chart shows us the very strong uptrend that accelerated with the April 2013 breakout and continued with the May breakout as volume surged along with price (a sign of strength or confirmation of the higher prices and uptrend).
When volume accompanies price, it tends to suggest even higher prices yet to come – our best strategy tends to be buying shares on pullbacks or retracements to rising moving averages or trendlines.  (more)
Please share this article

The New York Times had the definitive take on the vicious sell off in gold. The analysis provides a good representation of the current conventional wisdom. The only twist here is that the article from which this summary is derived appeared in the August 29, 1976 edition of The New York Times. At that time gold was preparing to embark on an historic rally that would push it up more than 700% a little over three years later. Is it possible that the history is about to repeat itself?  (more)