European central bankers broke new ground to protect their economies from a U.S.-led surge in bond yields, indicating they will keep benchmark interest rates low for longer than investors bet.

The pound and euro slid against the dollar, while bonds and stocks rose as both officials used rhetoric to distance themselves from Federal Reserve Chairman Ben S. Bernanke’s signal that the U.S. is preparing to start unwinding its $85-billion a month bond-buying program later this year. That had sparked a global selloff in bonds, forcing up yields in economies less able than the U.S. to cope with tighter credit. (more)

Skechers U.S.A., Inc. engages in the design, development, marketing, and distribution of footwear for men, women, and children. It operates through four segments: Domestic Wholesale Sales, International Wholesale Sales, Retail Sales, and E-commerce Sales. The company offers various footwear comprising casuals, such as boots, shoes, and sandals for men, as well as oxfords and slip-ons, lug outsole and fashion boots, and casual sandals for women; dress casuals, and seasonal sandals and boots for men and women; and relaxed fit casuals for men under the Skechers USA brand. It also provides city and off-road wear, footwear for joggers, athletic footwear, and sport sandals and boots under the Skechers Sport brand; sneakers for females under the Skechers Active brand; alpagarta-inspired footwear under the BOBS from Skechers name; low-top sneakers and boots under the SKCH+3 name for 20 to 34 year old women; and juniors footwear under the Daddy's Money name. In addition, the company offers boots, shoes, sneakers, sandals, and skimmers for infants, toddlers, boys, and girls primarily under the Skechers Kids brand. Further, it provides men's and women's casuals, field boots, hikers, and athletic shoes under the Skechers Work brand; sneakers for men and women under the Shape-ups Liv by Skechers name; technical footwear under the Skechers Performance brand.
To review Skechers's stock, please take a look at the 1-year chart of SKX (Skechers U.S.A., Inc) below with my added notations: 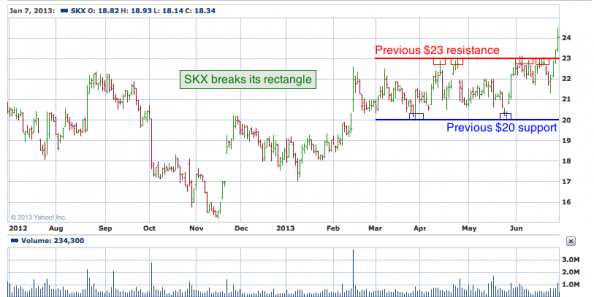 SKX has essentially traded somewhere between $16 and $23 all year long. For the last (4) months though, the stock had been stuck within a common pattern known as a rectangle. Rectangle patterns form when a stock gets stuck bouncing between a horizontal support and resistance. A minimum of (2) successful tests of the support and (2) successful tests of the resistance will give you the pattern. SKX's rectangle pattern had formed a $23 resistance (red) and a $20 support (blue). Last week the stock broke above $23, which was also a new 52-week high breakout, and should be moving overall higher from there.
The Tale of the Tape: SKX formed a rectangle pattern and broke out of it to a new high. The possible long position on the stock would be on a pullback to $23. However, a break back below $23 would negate the forecast for a move higher.
Please share this article
at 12:05 AM No comments: Links to this post 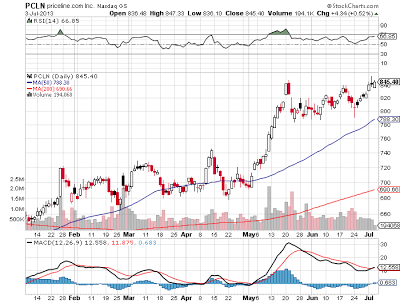 Ah, summertime, and the virtual traveling is easy.

Indeed, booking your getaway has never been easier: It’s just a few clicks away, what with all the travel websites competing for your business.

But there’s also money to be made from travel websites if you know how to invest in them.

With fierce competition for U.S. travelers, travel websites have increasingly taken on a more global approach, expanding their businesses or establishing partnerships in Europe and the Asia-Pacific.

Internet penetration remains low in Asia compared with Europe and the United States, but is growing rapidly, paving the way for travel sites’ push into the region.  (more)

With continued volatility in gold and silver, today King World News is pleased to share a piece of legendary technical analyst Louise Yamada’s “Technical Perspectives” report. Yamada is without question one of the greatest technical analysts Wall Street has ever seen. This information is not available to the public and we are grateful to Louise for sharing her incredible work with KWN readers globally.
The portion below covers gold, silver and stocks.
Continue Reading at KingWorldNews.com…
Please share this article
at 12:03 AM No comments: Links to this post

Investment Education 101: What it means to buy a company's stock