Silver Charts in the major currencies

The need to review the global charts on Silver

Here’s what Silver looks like in the major currencies … This is the “Handle” part of the giant “Cup and Handle” you’ll see in the first posted chart.   The first chart is the historical monthly chart showing the spike in 1980 up to the 2011 spike to $49.84 (the day we got everyone out of the Silver Call Options) ….  The other charts point to the “Come to Jesus” moment for the bankers and those short Comex and LBMA Silver contracts once Silver breaks through the resistance lines in a strong manner ….
Two years ago,  I posted the monthly Silver chart,  almost the day before another major bashing came in to bring the prices sharply lower.   I no longer fear the shorts,  because they are cornered more so now than before.   If they are able to do it again,  the handle will indicate a much larger move than it already is predicting.   For now,  a break above the $50 cup rim is a given (imo) with the possibilities being a break above $100 an ounce. Trading Long Call Options,  SLV,  or holding the physical will all prove to be a worthy bet (IMO remember,  I’m a broker,  there’s a reason for the title).   So Stay Strong!!

This Signal Has Perfect Record Of Forecasting Year-End Gains

This Signal Has Perfect Record Of Forecasting Year-End Gains
In pursuit of every edge that we can find, we do a lot of research into short-term market patterns and tendencies. The truth is, however, that the vast majority of our investment strategy is guided by longer-term, “slow money” tactics. These tactics, which we have quantitatively modeled, are more consistent and robust than these pattern studies, not to mention, lower maintenance (the model work has already been done over the course of many years). However, once in awhile, we uncover a pattern whose results have been so overwhelmingly consistent that it is hard to ignore. Such is the case with today’s Chart Of The Day.

Since its inception in 1986, the S&P 500 Volatility Index (VIX) has traded more than 34% above it 1-month low on 52 separate days in December. From the close of each day through the end of the year, the S&P 500 has been positive following all 52 days (this obviously excludes occasions that occurred on the final day of a year).

At the high of the day yesterday (December 9), the VIX was 41% above its 1-month low, set on Friday. Therefore, if the historical pattern is to hold true again, the S&P 500 should close the year above yesterday’s close of 2059.82.

The median gain following these days until year-end has been nearly 4%, which would put the S&P 500 at around 2140 on December 31. However, the historical gains have not all been sizable. For example, after triggering this signal on December 11, 1996, the S&P 500 closed the year just 2 pennies higher than its close on that day.


Additionally, several years had multiple days meeting the criteria of the study. 1991 had the most days with 10. It also closed the year extremely strong with year-end returns of close to 10% for most of those days. So the median returns are somewhat skewed by a few years with multiple occurrences that happened to close the year extremely strong.

Nevertheless, the sample includes instances from 13 prior years. So while the magnitude of the year-end gains may be skewed a bit by a few years, there is no skew to the consistency of the signal. 52 out of 52 is a track record we will take any day.

Of course, despite the perfect record, hopefully it goes without saying that there is no guarantee. There is always a first time for everything. However, while it may seem like everyone on Wall Street and Main Street is expecting a year-end rally, it would appear that they do have some evidence backing them up.

What are the cycles saying about gold these days? Kitco News speaks with managing director at Charles Nenner Research David Gurwitz to find out if gold has bottomed. “Long-term cycles have bottomed,” he says. “[But] just because the cycles bottom, it doesn’t mean it is ready to go right away. They can stay bottomed for a while.” In his last interview with Kitco News in September, Gurwitz called gold's bottom near $1,120 in November. He says that he expects gold to return to its highs and points out two targets for investors to watch: $1,244 and $1,282. Gurwitz also comments on the dollar and says he expect the currency to top out early next year, while the euro will regain strength. Tune in now to find out how he sees silver, stocks, oil and bonds set up for the coming year and what signals the cycles are telling him. Kitco News, December 10, 2014
Please share this article
at 12:03 AM No comments: Links to this post

The S&P 500 has retraced quickly to a known support target and we’ll focus on this current confluence level with great interest.
Let’s highlight this level and plan a pathway if buyers fail to intervene here as they’ve done in the past (on the weekly chart). 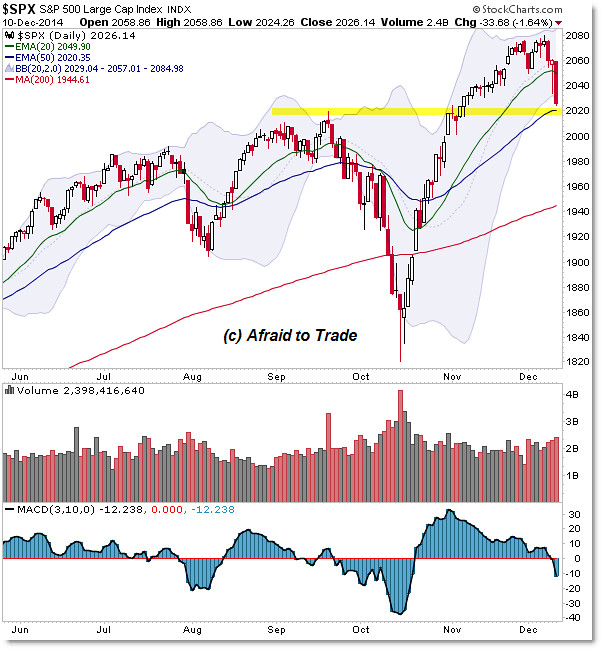 A simple plan would have us focus on the 2,020 highlighted confluence of the September price high with the rising 50 day EMA. (more)

After over three years in the investment doghouse, it looks like gold might just be getting ready for a breakout. It quickly added on to yesterday’s gains and silver broke $17. We’ve seen this happen so many times that we’re all skeptics, but one of these days we’ll be skeptics no more and the great unwinding will resume its course. We’re pretty sure the wait will soon be over. Part of the reason is because of the work of Martin Armstrong. When it comes to forecasting he has few equals. But it’s also due to many of the cycle guys out there. Perhaps you can’t trust any one of them, but when they’re all flashing green, you’ve certainly got to wonder what’s next!