America has spoken, and it's President Obama in the White House for a second term. And while most of the smart money already was betting on an Obama reelection, about half of the country was hoping for a different result. That other half feels strongly that the country is headed in the wrong direction, and many of them have expressed that via there buying habits.
One sector that I wrote about back in September that experienced some heavy buying in the first trading session after the president's victory is firearms. The two publicly traded gun makers, Smith & Wesson Holding Co. (NASDAQ: SWHC) and Sturm, Ruger & Co. (NYSE: RGR), each surged in Wednesday trade, with SWHC vaulting 9.6% and RGR leaping 6.8%.
There is a fear out there that now that President Obama has captured a second term, the Second Amendment will be under assault. That fear has driven gun sales to record levels this year, and those sales have exploded SWHC shares, up 136% year to date, while RGR shares are up some 43% so far in 2012.

I suspect that this fear factor is just starting to ramp up, and that means more gun buying, more record earnings showings for both companies, and more upside in both of these top-performing stocks. Here are two ways to play the gun trade:  (more)

The SIA Daily Stock Report utilizes a proven strategy of uncovering outperforming and underperforming stocks from our marquee equity reports; ttie S&P/TSX 60, S&P/TSX Completion and S&P/TSX Small cap We overlay these powerful reports with our extensive knowledge of point and figure and candlestick chart signals, along with other western-style technical indicators to identity stocks as they breakout or breakdown. In doing so we provide our Elite-Pro Subscribers with truly independent coverage of the Canadian stock market with specific buy and sell trigger points. Stocks opened sharply lower Wednesday following the re-election of President Obama and comments by Mario Draghi who said that the European debt crisis is impacting the German economy. The opening decline accelerated when tech favorites like Apple (NASDAQ:AAPL) broke sharply lower around 11:15 a.m., and the Dow hit its low of the day at the close of European exchanges at 11:30 a.m.

There is a lot to show on this chart of the S&P 500. Note the turn down from the blue, 50-day moving average, the break of the solid red, intermediate support line, and then the two lines at 1,418 and 1,403, which were support lines but now are resistance lines.

The break through all of these support lines confirms that the index is in a short-term and intermediate-term decline. The next support for the index is at its 200-day moving average at 1,380 and the longer-term support line drawn from the July 2011 high.

The break below 1,400, its first since Aug. 30, has no technical significance, but is a psychological negative.

Click to Enlarge
The sector that was impacted by much of the selling Wednesday was the financials. The Financial Select Sector SPDR’s (NYSE:XLF) 3.3% decline broke through the support of its 50-day moving average (blue line) and its intermediate support line (red dashed line). MACD is now on a sell signal and the break lower was from an ascending triangle. All of these factors are extremely bearish for this sector.

Click to Enlarge
Commentators remarked that the increase in the CBOE Volatility Index (VIX) was uncharacteristically mild compared to the overall market decline. This is no doubt due to shorts taking profits throughout the day. A further spike up would indicate that more broad-based selling could occur.

Conclusion: I noted the more positive footing of the Dow and Nasdaq recently, but Wednesday’s intermediate breakdown of the S&P 500 confirms that the broad market is headed lower.
There are two important support lines within the immediate range of the breakdown: the 200-day moving average at 1,380 and the July 2011 support line at 1,356. If these lines fail to hold, then the entire structure of this year’s price action could be under attack.

The immediate cause of the breakdown was no doubt the re-election of the president, but a more important long-term consequence is his stated desire to enforce new and more strident regulations on the financial sector.

And then there is the looming fiscal cliff, which, in my opinion, was made worse by House Speaker John Boehner’s remarks that came at about 3:45 p.m. The headline from The Wall Street Journal read, “Boehner Open to Deal to Avoid Cliff,” but the market sold off anew following his statement.
Thus, we are again faced with uncertainties of both a domestic and international nature, and neither usually leads to higher stock prices. Sell into rallies until a more positive technical picture emerges.
at 12:06 AM No comments:

Spot The Odd Market Out Since The Election

UPDATE: GRPN discounted by 13% after-hours on sales-staff and outlook cut
Market watchers are stunned, stunned we tell you, that we didn’t bounce today after yesterday’s 1-year record plunge in stocks. Whether AAPL led the market or the market led AAPL is irrelevant, there is one clear fact, everyone and their pet rabbit Clive is looking to reduce exposure to that anchor-like alpha-destroyer. Gold once again outperformed every other asset class today as it has seemingly reaffirmed since the election that “buying gold is just buying a put against the idiocy of the political cycle.” S&P 500 futures plunged into the close to end on their lows (-60 points from yesterday’s highs); AAPL closed at its lows (-3.7% on the day – through its 55-week average); financials dropped further; Treasury yields plunged (30Y -16bps on the week); while the USD generally tracked sideways to higher; high-yield credit closed at its lowest price in over two months (don’t tell Tom Lee). VIX compressed modestly (and steepened) as we suspect election hedges are lifted (and also AAPL overlays discarded).
Read More @ Zero Hedge.com

This Is How Gold & Silver Will Fare If Stocks Are Crushed

Today Tom Fitzpatrick spoke with King World News about what to expect going forward from gold, silver, the US dollar, the euro, bonds and stocks. Fitzpatrick has been astonishingly accurate in forecasting the movements of both gold and silver. Now Fitzpzatrick lets KWN readers know what to expect from stocks, bonds and the currencies, as well as the metals.
Here is what top Citi analyst Fitzpatrick had to say, along with some powerful charts: “We still have the overall view that this up-move we saw on the Dow, which was just short of 13,700, is very similar to the up-move we saw after the fall in 1973/74.
Also, we have two very important support levels on the VIX, which when we’ve looked back over the past five years, has been a good indication that we will see a strong up-move in the VIX, and by definition a strong down-move in the equity markets. We may have seen the start of that today (see chart below).
Tom Fitzpatrick continues @ KingWorldNews.com

To review Nu Skin’s stock, please take a look at the 1-year chart of NUS (Nu Skin Enterprises, Inc.) below with my added notations: 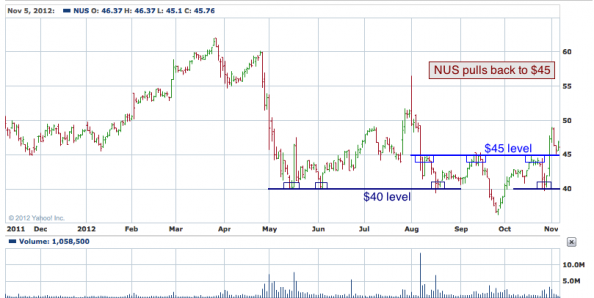 First off, NUS has been a somewhat volatile stock recently. So, trading it could present some challenges. However, the stock has managed to form a couple of key price levels to watch. The $45 level (blue) was a clear resistance for the last (3) months until the stock broke above that level about a week ago. NUS has already found new support once at that $45 just this week. The other level to keep in mind is the $40 level (navy) if the stock should happen to break back below $45.
at 12:04 AM No comments:

Chart of the Day - Lennar (LEN)