Gildan Activewear Inc. engages in the manufacture and sale of apparel products primarily in the United States, Canada, and Europe. It sells T-shirts, fleece, and sport shirts to wholesale distributors under the Gildan brand name. The company also provides its activewear products for work and school uniforms and athletic team wear, and other purposes to convey individual, group, and team identity. In addition, it offers apparel, which includes socks, underwear, and activewear products primarily to U.S. retailers; and athletic, casual, and dress socks for U.S. retailers. Further, the company holds contractual licensing relationships for the Under Armour and New Balance brands for socks; and manufactures and distributes activewear products for consumer brands, including T-shirts and sport shirts under the Anvil brand. It markets its sock products under the various brands, including Gold Toe, PowerSox, SilverToe, Auro, All Pro, GT, and Gildan brands. The company was formerly known as Textiles Gildan Inc. and changed its name to Gildan Activewear Inc. in March 1995. Gildan Activewear Inc. was founded in 1984 and is headquartered in Montreal, Canada.
Please take a look at the 1 yr. chart of GIL (Gilden Activewear, Inc.) that I have shown below with my added notations: 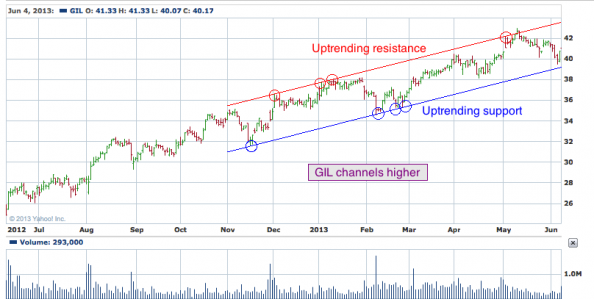 GIL has formed a nice, uptrending channel over the last (7) months. A channel is simply formed through the combination of a trend line support that runs parallel to a trend line resistance. When it comes to a channel, I always tell my students that any (3) points can start the channel, but it's the 4th test and beyond that confirm it. You can see that GIL has multiple test points between the channel resistance (red) and channel support (blue). Following the GIL channel can provide you with both long and short trading opportunities.
The Tale of the Tape: GIL has formed a common chart pattern know as a channel, in this case, an up-channel. A long opportunity could be entered on a pullback to the channel support, which at this point is approaching $40. Short trades could be entered at channel resistance OR if GIL were to break below the channel support.
Please share this article
at 12:05 AM 1 comment: Links to this post

The two most popular investments a few years ago have been dormant and out of the spot light. But from looking at the price of both gold and oil charts their time to shine may be closer than one may thing.
Seasonal charts allow us to look at what the average price for an investment does during a specific time of the year. The gold and oil seasonal charts below clearly show that we are entering a time which price tends to drift higher.
While these chart help with the overall bias of the market keep in mind they are not great at timing moves and should always be coupled with the daily and weekly underlying commodity charts.
Now, let’s take a quick look at what the god father of technical/market analysis shows in terms of market cycles and where I feel we are trading… As I mentioned last week, a picture says a thousand words so why write when I can show it visually.

Precious Metals like gold and silver are nearing a bounce and possible major rally in the second half of this year.

Crude oil has been a tough one to trade in the last year. The recent 15 candles have formed a bullish pattern and with the next few months on the seasonal chart favoring higher prices it has been leaning towards the bullish side.

In short, I feel the equities market is nearing a significant top in the next couple weeks. If this is the case money will soon start flowing into commodities in general as more of the safe haven play. To support this outlook I am also factoring in a falling US dollar. Based on the weekly dollar index chart it looks as though a sharp drop in value is beginning. This will naturally lift the price of commodities especially gold and silver.
It is very important to remember that once a full blown bear market is in place stocks and commodities including gold and silver will fall together. I feel we are beginning to enter a time with precious metals will climb but it may not be as much as you think before selling takes control again.
Final thought, This could be VERY bullish for the Canadian Stock Market (Toronto Stock Exchange) as it is a commodity rich index. While the US may have a pullback or crash Canadian stocks may hold up better in terms of percentage points.
Please share this article
at 12:05 AM No comments: Links to this post

While the markets continue to do quite well, many investors have seen some sector rotation starting to take place. The move as of late has been out of lower risk, high dividend, sectors like utilities and real estate investment trusts, and into higher risk, growth sectors like financials, consumer discretionary firms, and health care.
This rotation is pretty evident when investors consider a six month chart of some of the major sector ETFs, and the dislocation between the higher risk and lower risk ones.

Pretty much starting in early May, sectors like financials (XLF) and health care (XLV - ETF report) took a leadership role, and left ones like utilities (XLU) and consumer staples (XLP) in the dust.
Looking Ahead
Given this reversal, it may be worthwhile for investors to go with the hot hand and stay in growth sectors. While a broad play could be an interesting way to go, investors may want to delve a bit deeper, and go with a surging segment of the health care world instead; biotechnology.(more)

Mortgage rates moved to within a hair of the 4% barrier this week, according to mortgage giant Freddie Mac.


"Fixed mortgage rates crept up further this week following a solid employment report for May," said Frank Nothaft, Freddie Mac's chief economist.
The recent improvement in the employment picture should result in more home buying, which would pressure rates even higher. Rates have also been going up because the Federal Reserve has signaled that it might cut back on buying mortgage-backed securities. If that happens, lenders would likely charge higher rates to make the securities more attractive to other buyers.


As rate increases push up the cost of home ownership, the impact on the housing market will be slight, according to Gumbinger, vice president of HSH.com, a mortgage information company.
But, he added, "Although the size of the increase was [small], it is still unwelcome as the housing market tries to gain momentum."

The increase will boost monthly mortgage payments for homebuyers by about $33 for every $100,000 borrowed. Gumbinger said that will discourage some existing homeowners from refinancing their loans if they already have a competitive rate but "[It] shouldn't be a major setback for a home purchase transaction."


But the soaring rates create a double whammy for would-be home buyers, with home prices also on a rapid rise -- up more than 10% in the 12 months ended March 31, according to the S&P/Case-Shiller national home price index.

If both trends continue, it could put a damper on a housing market still in a struggle to put the bust behind it.