Why a U.S.-style housing nightmare could hit Canada

How Canada resembles a slow-motion replay of the American crash.

An expatriate always thinks about going home. The longer the time abroad, the stranger the prospect of re-entry feels.
But if you're a Canadian living abroad these days, the idea of returning home has become downright frightening. Stories are now routinely surfacing in the Canadian media suggesting collective madness when it comes to affordable living.
Our biggest real estate markets — Toronto and Vancouver — seem to have decided they're really London and Manhattan. Several of our smaller cities are wildly optimistic, too, with year after year after year of six-, seven-, even 10-per-cent increases in property values. (more)

The #1 Reason Inflation Will Win

Dear Reader,
Economist Terry Coxon and BIG GOLD Editor Jeff Clark had some interesting discussions during the recent Casey Research Summit on Navigating the Politicized Economy. They noticed a near-consensus among the speakers that there’s no way out for the over-indebted US government – or the Eurozone for that matter – which has consequences for all participants in the global economy. Below, you can read why Terry (and others) are convinced there’s no way out, why he’s convinced the problem will end in inflation, and what the investment implications are for gold and silver.
How do we profit from that? Even as you receive today’s Daily Dispatch, Jeff and I will be flying down to Mexico to look at a silver mine one of our companies recently acquired. Due diligence: pick right and sit tight. That’s how we do it – and you can too.
Continue Reading at CaseyResearch.com…
at 12:05 AM No comments:

We Have Entered A New & More Deadly Phase Of This Cycle

Today Michael Pento writes about the ongoing destruction of fiat currencies, and what investors should be doing with their money in this environment. Pento has been incredibly accurate regarding his predictions of central bank moves. He now believes we are entering a “new” and more “deadly phase” of this cycle.
Michael Pento writes exclusively for King World News to let readers know what to expect from central planners, and how it will impact the economy and key markets. Here is Pento’s piece: “The worldwide currency debasement war has now entered a new and more deadly phase. Central banks have escalated the combat plan to bring about the world’s weakest currency for their individual countries.”
Continue Reading at KingWorldNews.com…
at 12:04 AM No comments:

Probably the most significant indicator employed by technical traders to signal them to initiate trades triggered a very important ‘Buy’ signal on Thursday.

The well-known and ubiquitously-used technical indicator, called the ‘Golden Cross’, gave the ‘green light’ to scores of buyers of gold bullion, when the price settled above the $1,770 level on Thursday.

gold-eagle.com / by Jeb Handwerger /
Since July we have alerted our readers to a breakout in gold and silver prices as we expected a risk on rally in commodities with the catalyst being QE3 combined with worldwide stimulus moves from Central Bankers. Since that time silver has soared 30% higher almost 10 straight weeks in a row as Bernanke announces a QE 3, 4, 5+…? and record low interest rates until mid-2015. 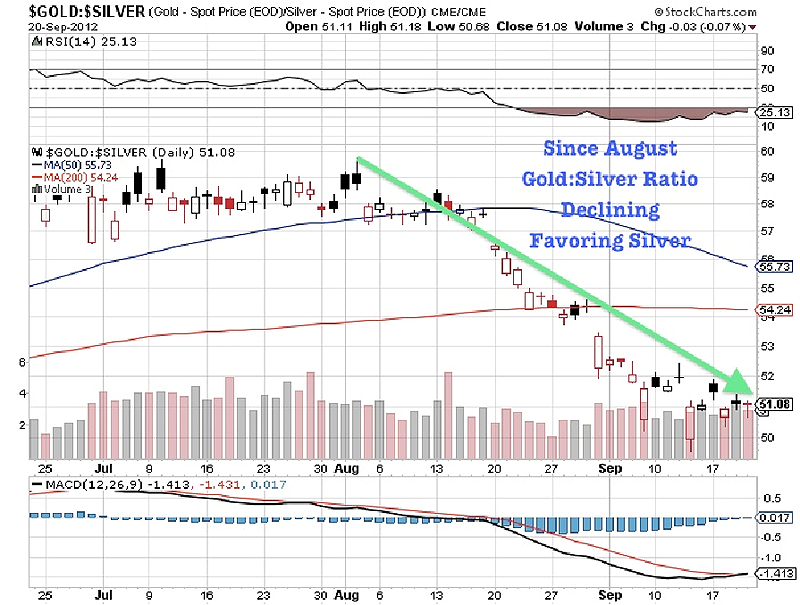 Silver has been outperforming gold over the past 10 weeks as investors are hoarding and buying poor man’s gold to hedge against worldwide quantitative easing and pump-priming being implemented by Central Banks around the world to devalue their respective currencies.
The Bank of Japan joined the Fed, ECB, China, South Korea and others by announcing an aggressive stimulus program. This is extremely inflationary and bullish for gold and silver and bearish for the purported safe havens namely the U.S. dollar, long term treasuries, Euro, Yen and Yuan.
Remember Japan is the third largest economy in the world and they are currently facing an economic slowdown, rising electricity prices due to increase oil imports and is in the midst of a territorial dispute in the South China Seas with China. Japan is mimicking Bernanke’s QE decision last week to attempt to devalue their currencies to boost exports. The Japanese stimulus is massive and will now total nearly 20% of Japan’s total economy. The U.S. dollar is falling as these drastic moves were much bigger than the consensus expected.
READ MORE
at 12:04 AM No comments:

James Turk, Founder of GoldMoney calls in from Spain to explain how the FED’s latest actions spell doom for the Dollar. James reminds us that what is happening in the United States RIGHT NOW, thanks to the privately owned Central Bank, always ends the same way: In a disaster for the currency. We’ve seen it before: Weimar Germany, Zimbabwe, Argentina, Serbia… and we’ll soon see it in America. James also revisits his decade long prediction of $400 silver and $8,000 gold by 2014 – 2016. And he corrects me, explaining that he sees it happening as early as 2013-2015, along with hyperinflation. The fuse has been lit and time is running out.

To review Veeco's stock, please take a look at the 1-year chart of VECO (Veeco Instruments, Inc.) below with my added notations: 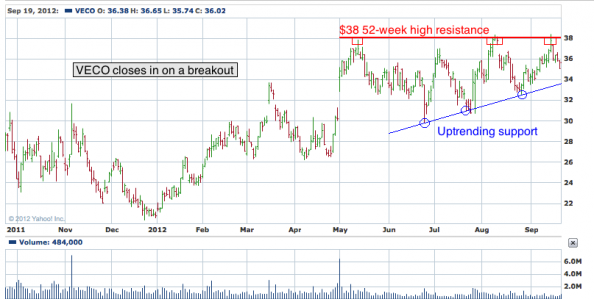 VECO has created a couple of important price levels to watch. First, VECO has formed a clear resistance at $38 (red), which would also be a 52-week high breakout if the stock could manage to break above it. In addition, the stock is climbing a short term, up-trending support level (blue) over the last (3) months. These two levels combined have VECO stuck within a common chart pattern known as an Ascending Triangle. Eventually, the stock will have to break one of those two levels.
at 12:03 AM No comments: