Dec. 4 (Bloomberg) — Rob McEwen, chief executive officer of McEwen Mining Inc. and founder of Goldcorp Inc., talks about gold production and prices. He speaks with Guy Johnson on Bloomberg Television’s “City Central.”
at 12:05 AM No comments: Links to this post

It also manufactures EndoWrist instruments consisting of forceps, scissors, electrocautery, scalpels, and other surgical tools, which incorporate wrist joints for natural dexterity for various surgical procedures. In addition, the company offers da Vinci single-site instruments and accessories that allow da Vinci Si surgical systems to work through a single incision than multiple incisions. Further, it sells various vision and accessory products for use in conjunction with the da Vinci surgical system as surgical procedures are performed. It markets its products through sales representatives in the United States, and through sales representatives and distributors in international markets.

To analyze Intuitive's stock for potential trading opportunities, please take a look at the 1-year chart of ISRG (Intuitive Surgical, Inc.) below with my added notations: 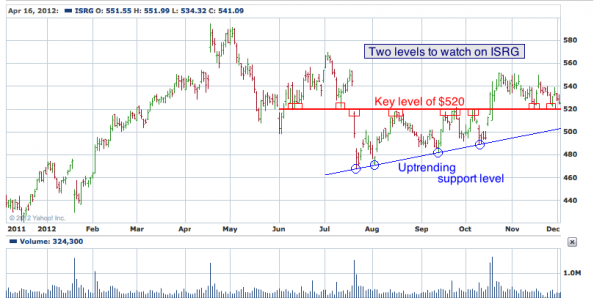 ISRG has (2) key levels to watch. The first is the very common level of $520 (red). You can see how the $520 has been support, then resistance, and now support again here recently. The other level ISRG has formed is a nice trend line of support (blue). Always remember that any (2) points can start a trend line, but it's the 3rd test and beyond that confirm its importance. Obviously ISRG's trend line is important to the stock since it has been tested on multiple occasions.
at 12:05 AM No comments: Links to this post

Dan Caramanico – Time To Build Your Skills For The New Economy

Dan Caramanico has been training successful sales people for decades. He’s written two books about what it takes to be a great salesman. Being great at any profession is a challenge that few rise to. And Dan stated that no matter how you make your living, you’re always selling;especially yourself and your personal brand. That’s why it’s extremely important to learn these new skills and up your game. The New Economy means that the rules have changed and if you want to do more than just survive, it’s time to start learning again and optimize your communication skills.


A look at this week’s show:
-This is a great time to simplify the tax code
-Worldwide, all currencies are being devalued
-We are within 5 years of a gold standard
About the Guest: Steve Forbes is Chairman and Editor-in-Chief of Forbes Media. In 1996 Forbes entered the new media arena with the launch of Forbes.com. Now averaging 18 million unique monthly visitors, it has become a leading destination site for senior business decision-makers and investors.

Read | Subscribe@iTunes
at 12:04 AM No comments: Links to this post

Yamada – Here Are The Key Levels To Watch On Gold & Silver

December 5 (King World News) – Gold spot price (GOLDS-1,714.80) carried little immediate effect regarding a pick up in demand when the margin requirement for the gold futures was lowered mid month. Recent behavior has been unusual in that the dollar and gold have both withdrawn in price (they usually perform inversely). Gold appears weak (see Figure 10) and may need to extend the ongoing consolidation.
The weekly momentum is turning negative (see arr w) along with the daily, and the monthly (neither shown) remains negative and deteriorating. With all three momentum readings negative, the path of least resistance appears down, suggesting price may decline further within the current consolidation and even test supports.
Louise Yamada continues @ KingWorldNews.com
at 12:04 AM No comments: Links to this post 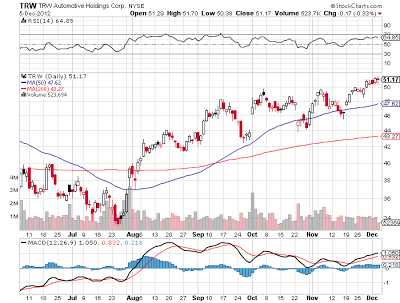 The "Chart of the Day" is TRW Automotive (TRW), which showed up on Tuesday's Barchart "52-Week High" list. TRW on Tuesday posted a new 14-month high of $51.47 and closed +1.62%. TrendSpotter has been long since Nov 5 at $49.28. In recent news on the stock, TRW on Oct 30 reported Q3 adjusted EPS of $1.28, well above the consensus of $1.17. TRW gapped higher on Oct 1 when the company announced a $1 billion share repurchase program. TRW Automotive, with a market cap of $6 billion, is an automotive supplier. Its products include integrated vehicle control and driver assist systems, braking systems, steering systems, suspension systems, occupant safety systems (seat belts and airbags), electronics, engine components, fastening systems and aftermarket replacement parts and services.
at 12:03 AM No comments: Links to this post