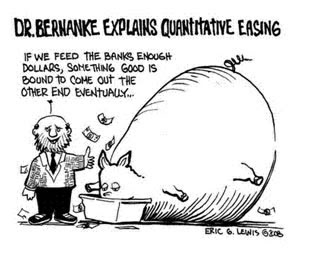 Gold will most likely double from its current $1150 an ounce during the course of the bull market, according to Puru Saxena, founder of Puru Saxena Wealth Management.

In an exclusive interview with Kitco News, Saxena said one major factor in gold’s favor "is that central banks have now become net buyers of gold. So that reduces supply from the market,” said Saxena.

Investment demand will appreciate over time as people become more dubious over currencies and they transfer assets into gold as a hedge, said the investment adviser from his Hong Kong office.

He thinks inflation will occur at an accelerated pace over the next few years. "Real interest rates are negative in most countries, so gold should continue to benefit purely as an anti-currency because people lost faith in the euro and the dollar," he said. "At some point people are going to say well, ‘we don’t want to lose purchasing power in currencies that are dubious, we want gold as an insurance.’” (more)
at 4:16 AM No comments: Links to this post

Emerging markets are changing the way the world works by developing into global powerhouses. The latest edition of our “What’s Driving?” series identifies the six key drivers and the effect they have on the economic vitality of emerging markets.
1. Rapid Economic Growth: In the coming years, growth in emerging economies is expected to outpace that of the developed world. This growth is fueling an increase in household income in places like China and India where nearly 60 million people—roughly the combined populations of Texas and California—are joining the ranks of the middle class each year. (more)
at 4:04 AM No comments: Links to this post

Soros: Tame Derivatives or Risk Yet Another Crash

"Whether or not Goldman is guilty, the transaction in question clearly had no social benefit,” Soros writes in the Financial Times. "The primary purpose of the transaction was to generate fees and commissions."

"This synthetic collateralized debt obligation did not finance the ownership of any additional homes or allocate capital more efficiently; it merely swelled the volume of mortgage-backed securities that lost value when the housing bubble burst.” (more)
at 4:04 AM No comments: Links to this post

Is South Africa turning into Zimbabwe?

Aleading black South African ­commentator has uttered the dreaded “Z” word, a sentiment that has been considered too terrible to think for ordinary people and considered near-treasonous in the upper reaches of the ruling African National Congress.

“Hardly a decade from now, Zimbabwe will be our destination, our reality,” wrote Barney Mthombothi in his column in this weekend’s Financial Mail, South Africa’s equivalent of The Economist.

Mr Mthombothi, one of his country’s finest journalists, was commenting in the course of an analysis on the dire situation in neighbouring Zimbabwe where, he said, life had become “hell on earth”. (more)

Greek meltdown in danger of spreading

GERMANY, France and the International Monetary Fund (IMF) must act quickly to bail out Greece to prevent a slide in confidence in financial markets, Alistair Darling said yesterday.

“It’s absolutely imperative that the IMF, the euro group and Greece sort this out,” said the chancellor, attending the spring meetings of the IMF and World Bank in Washington.

Eurozone governments and the IMF are preparing a €45 billion (£39 billion) loan package for Greece after market concerns about its ability to meet its financial commitments. (more)

Dodd Bill Would Allow Fed To Hide Its Spending

The Wall Street reform bill headed for a test vote on the Senate floor Monday night will allow the Federal Reserve to continue to pump trillions of dollars into major banks largely in secrecy, the co-author of House language that would open the central bank to an audit charged in a memo to the Senate.

"The Senate has a provision in its reform bill that purports to audit the Fed. But, it really doesn't do anything of the sort. I'm going to run down the details for you, and reprint the legislative language so you can read it yourself," writes Rep. Alan Grayson (D-Fla.).

It would not allow the GAO to look into the Fed's massive purchase of toxic assets, its hundreds of billions in foreign currency swaps with other central banks or its open market operations, among other restrictions. (more)

Celente argues that the people who deregulated the financial industry are the same people advising President Obama in the White House. The trends forecaster points out the large amounts of money President Obama and Senator Chris Dodd have received from financial institutions.

“This is just another episode in the presidential reality show to make people feel like they’re doing something,” says Celente. “The major source of the problem is Federal Reserve policy.”

Celente states: “The Obama policies are the ones that are creating the too-big-to fails to make them even bigger.” He comments on a page of the bill that allows the FDIC to bailout the banks with taxpayer money.

Bank of Canada Governor Mark Carney warned on Saturday of the need to tackle growing fiscal deficits around the world, saying some people underestimate the scale of action needed to bring public finances under control.

Carney, speaking to reporters following G20 and IMF meetings in Washington, said the Greek debt crisis had served as a stark reminder to policy makers of the dangers inherent in their massive, globally coordinated stimulus plans, widely credited with preventing a depression.

The Canadian economy could take a hit if other countries were forced to make bigger-than-expected fiscal adjustments or implement exit strategies sooner than anticipated, he said. (more)