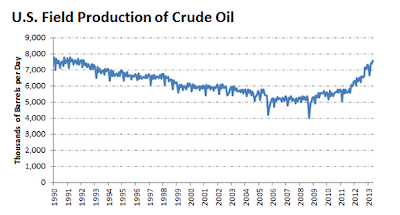 Peak oil is here, writes The Economist.
But not the peak oil you're thinking of, where supplies dwindle and prices march inevitably higher. That's so 2008. This is peak oil demand, and it could hit in the next few years.
It writes:


We believe that demand, not supply, could decline. In the rich world oil demand has already peaked: it has fallen since 2005. Even allowing for all those new drivers in Beijing and Delhi, two revolutions in technology will dampen the world's thirst for the black stuff.
The first revolution was led by a Texan who has just died (see article). George Mitchell championed "fracking" as a way to release huge supplies of "unconventional" gas from shale beds. ... The other great change is in automotive technology. Rapid advances in engine and vehicle design also threaten oil's dominance. Foremost is the efficiency of the internal-combustion engine itself. Petrol and diesel engines are becoming ever more frugal. The materials used to make cars are getting lighter and stronger. The growing popularity of electric and hybrid cars, as well as vehicles powered by natural gas or hydrogen fuel cells, will also have an effect on demand for oil.  (more)

10 Shocking and Overlooked Comparisons (in Graphs!)

Investors often view the financial sector is as a black hole of sorts. Banks, mortgage lenders, insurers, and hedge funds are constantly lumped together and referred to as if they were one overly complex and unintelligible mass.
While many of these entities are interconnected and dabble in similar areas, it's important to investors to understand the vast differences and the quick changes that can occur, seemingly in the blink of an eye.
With that in mind, here are 10 graphical representations of some astonishing and overlooked comparisons involving banks, insurers, real estate, and more.
1. Unforeseen circumstances Source: Bank of America annual reports.
In 2006, pre-Countrywide acquisition, Bank of America (NYSE: BAC  ) was considered one of nation's strongest financial institutions. Little did management and shareholders know that the Countrywide acquisition would ultimately lead to massive legal settlements and liquidity uncertainty as a result of "representations and warranties" made on the droves of questionable mortgages Countrywide had written for years.  (more)
Please share this article
at 12:05 AM No comments: Links to this post 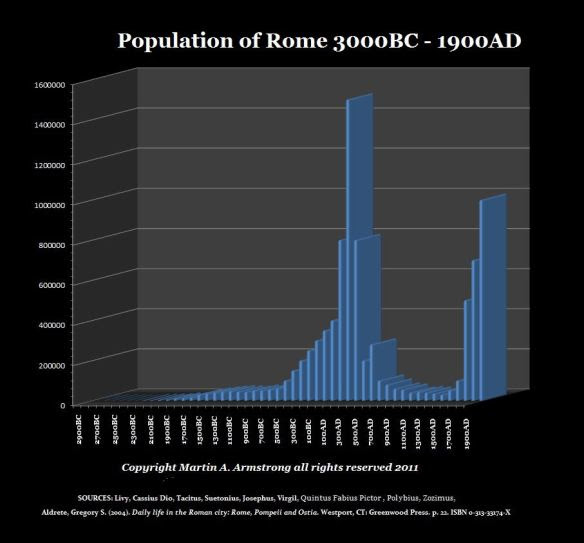 Since the late 1990s, the birth rate is relatively constant at 1.4 children per woman in Germany. according to the Federal Statistical Office . This is effectively the same trend among all developed nations. This eventually leads not only to the fact that the population is decreasing not only in Germany but in all developed nations Russia is offering bonuses to women having children. Japan is suffering in the same manner with its birth rate plunging to historic lows. The same trend is emerging in the USA as the birth rate hits also historic lows. Couples have to have two children just to maintain the status quo.
Continue Reading at ArmstrongEconomics.com…
Please share this article
at 12:05 AM No comments: Links to this post 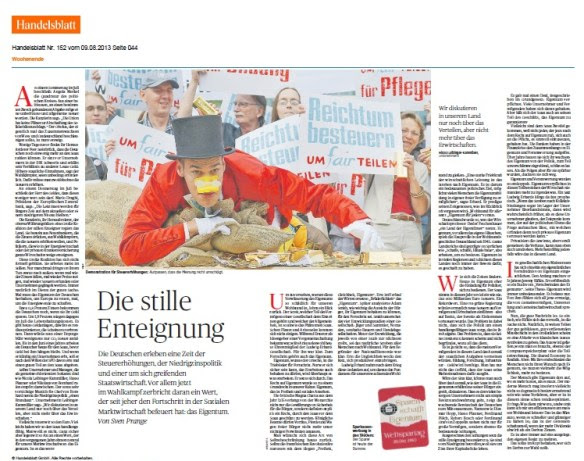 What I have been writing about may seem extreme to some Americans. But in Europe where the economic decline is in full bloom, the ”Handelsblatt – Germany”, the leading newspaper on business, has come out with an article entitled The Silent Expropriation (Die stille Enteignung). This is the most respected newspaper so it is not the lunatic fringe. What I have been writing about is starting to make the mainstream press in Germany – rising taxes and falling economic growth.
“We only discuss in this country about re-distribution, but not how to work for that money in the first place”
“We only have the power to do one thing: either we invest (and create jobs) or we pay wealth tax” (Germany wants to introduce)
Subtitle of socialist chancellor candidate Peer Steinbrueck: “Many thoughts about other people’s money” (and how to re-distribute it)
Continue Reading at ArmstrongEconomics.com…
Please share this article
at 12:04 AM No comments: Links to this post 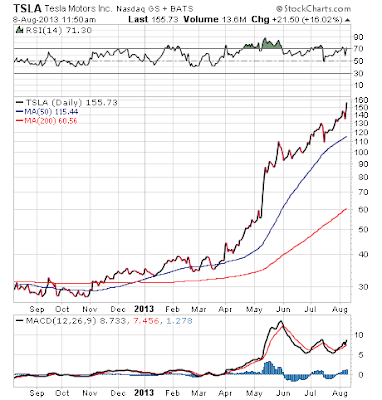 There's nothing more satisfying than being right, and if you've been a bull on electric carmaker Tesla Motors (NASDAQ: TSLA) the way I've been, you are likely basking in the afterglow of your own prescience.

The real news, however, was the company's proclamation that if you exclude costs associated with stock compensation and early repayment of a government loan, Tesla actually made a profit of $0.20 a share. That figure trounced consensus forecasts for a Q2 loss of $0.17 a share.

The company's calculation doesn't comply with generally accepted accounting principles, or GAAP, but the fact that Tesla can be considered in the black when excluding items is something that came as a big surprise to Wall Street.  (more)

Food Stamp Nation ~ Are The Americans too Addicted to Government Handouts ?

$11 TRILLION in welfare spending over the next decade. Obama has successfully "fundamentally transformed" America with ever increasing records of Americans on food stamps and other government handouts. But where will the money come from? If you tax the mythical rich people 100% it won't even run the current spending levels for more than a couple months. Obama has already bankrupted America and yet can see nothing but more spending and more debt until the whole economy collapses. Is that the real "fundamental transformation" that he and his radical Marxists want? Was Glenn Beck really right when he warned us about the Cloward-Piven strategy to collapse the system? Our redistributionist president can take the mask off now. There are no more elections for him to worry about. Expect more and ever growing tyranny while ignoring the will of the people, the reality of economics and the rule of law.
Please share this article
at 12:04 AM No comments: Links to this post

The World Is Now On The Edge Of A Massive Collapse

With continued uncertainty in key global markets, today Egon von Greyerz warned King World News that the world is now on the edge of a massive collapse. Geryerz also cautioned investors that banks are now making it harder for their clients to get physical gold out of the banking system. Below is what Greyerz, who is founder of Matterhorn Asset Management out of Switzerland, had to say in this powerful interview.
Greyerz: “Eric, when you are living through history-making events, it’s often difficult for investors to see exactly what is happening. I have, for some time, put forth the argument that we are at the end of at least a 250-year cycle, and possibly at the end of a cycle that is of the same magnitude as the Roman Empire.
Continue Reading at KingWorldNews.com…
Please share this article
at 12:03 AM No comments: Links to this post