Profit from the Huge Price Surge in Palladium 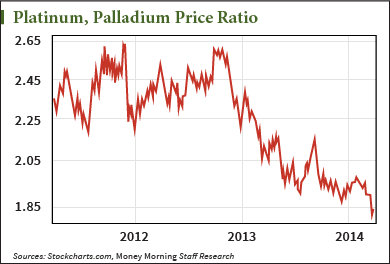 You already know that South Africa and Russia are where nearly 80% of annual palladium supply is mined.
Since October, South Africa's problems with striking miners have only gotten worse. For three of the country's largest platinum producers (palladium is often a byproduct of platinum production), the recent nine-week strike has caused irreparable damage, costing the sector almost $1 billion in revenues.
Farther east, sales from Russian palladium stockpiles also appear to have reached their limits.
Traders closely track Russian shipments of palladium to Switzerland for clues on their supplies. That's because many believe Russia moves the bulk of its palladium through that country. February shipments were 6,500 ounces and have been trending lower since early 2011, according to Barclays, which expects a "sizable deficit" in 2014. And that's despite climbing prices.  (more) 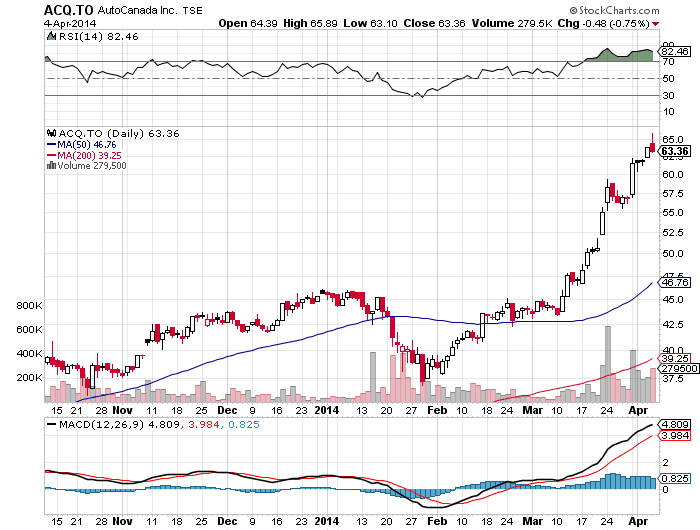 The crown jewel is AutoCanada, whose shares have climbed by more than 80% since it appeared in the August 23, 2013 edition of Take Stock. The S&P/TSX Composite is up 13% over this same period.

AutoCanada is Canada’s only publicly held owner of auto dealerships. And this company has a huge runway in front of it as current dealership owners are nearing retirement and looking for an exit strategy that monetizes their life’s work. AutoCanada is that exit strategy.

It’s important to understand the distinction in the auto industry between the companies that make the cars (and their well-documented inability to consistently perform over the years—GM’s current ignition issues are one of many examples) and the dealerships that sell them, which are rarely unprofitable. The beauty of the dealership model, we believe, is that the bulk of the business is covered by the servicing, parts, and used car segments, all of which provide a recurring revenue stream. Which to us makes the more cyclical new car sales portion of the business more or less gravy.

AutoCanada has recently added two GM dealerships in Saskatchewan, which is a big development because it indicates that GM Canada is warming to the idea of publicly held companies owning its dealerships. In addition, AutoCanada’s recently released quarterly results were well-received by the market; those results indicated an increased pace of near-term dealership acquisitions over what had been anticipated.
Please share this article
at 12:04 AM No comments: Links to this post

With the albatross of a credit card security breach still hanging around its neck, it is no wonder that retail giant Target (NYSE: TGT) is out of favor on Wall Street. In just the past week we've seen Cowen & Co.'s Consumer Tracking Survey report "meaningful decreases" in customer satisfaction. And Standard & Poor's lowered the company's credit rating one notch to "A."
But the charts tell a different story, and it is a good one.
We can attribute the February rally, following weak fourth-quarter results, to excessive pessimism. The news was bad, but not as bad as expected, and shares soared. And now after a four-week slide, it looks as if TGT is ready to break out again. Bad news be damned.

The February rally pushed the stock above the 50-day moving average for the first time since the data breach was reported in December. And the March pullback found support back at the moving average in what chart watchers call a successful test of the initial breakout. Johnny-come-lately bulls had a second chance to buy and they took it.  (more)
Please share this article
at 12:04 AM No comments: Links to this post 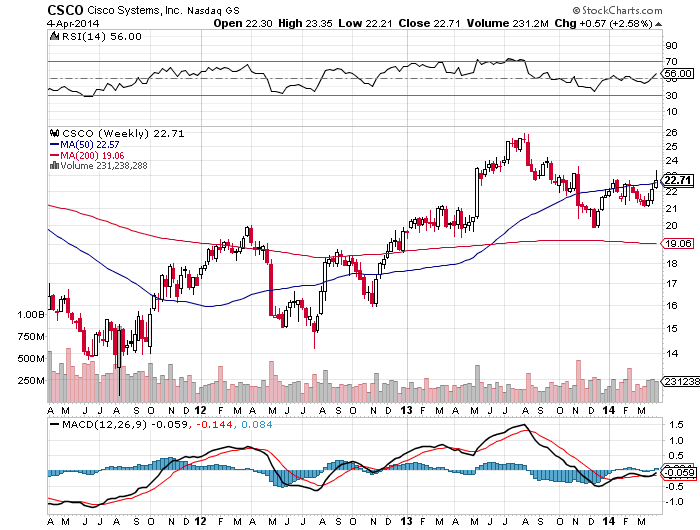 The stock market is approaching all-time highs yet again…
And investors seem to have an insatiable appetite for risk these days. There seems to be no end in sight for this five-year rally.
But all good things eventually come to an end on Wall Street. This isn’t close to the longest time between 10% pullbacks for the S&P 500, so a correction isn’t necessarily imminent. But, someday a correction will occur. When it happens, you’ll want to have plenty of income investments in your portfolio.  (more)