Coast to Coast AM 25.8.2012 - Banking Fraud Special with Four banking experts Robert Mazur, Barry James Dyke, William K. Black and John Truman Wolfe .Recently HSBC has been fined $1Billion for laundering drug money through its branches in MEXICO; apparently $7Billion into the US, not sure over what period of time. Its a long way from their branch be renovated opposite Lincoln Stone Bow . Also recently Barclays bank has admitted lying - for over four years - about the interest rate it was having to pay to borrow money. Between 2005 and 2009 - all the way through the credit crunch - the bank made artificially low submissions to protect its reputation as it struggled during tight financial conditions. What is perhaps most shocking of all, the lying was done .The revelation of the festering boil that was the banking scandal and financial collapse﻿ of '08 is now looking more like a cancer that has spread throughout every facet of society's working parts.

(Editor’s Note: Don Vialoux is scheduled to appear on Berman’s Call on Monday at 11:30 AM EDT)

More short term technical evidence that U.S. equity markets have passed a short term peak! Short term momentum indicators for the S&P 500 Index have rolled over from overbought levels. The Index is about to break below its 20 day moving average at 1,399.12 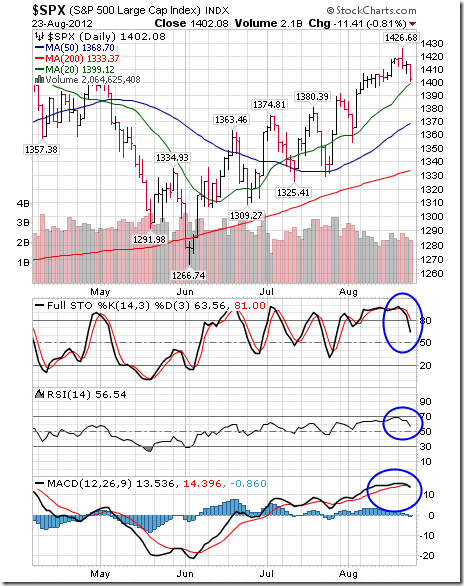 Ditto for the Dow Jones Industrial Average! It already has broken below its 20 day moving average. 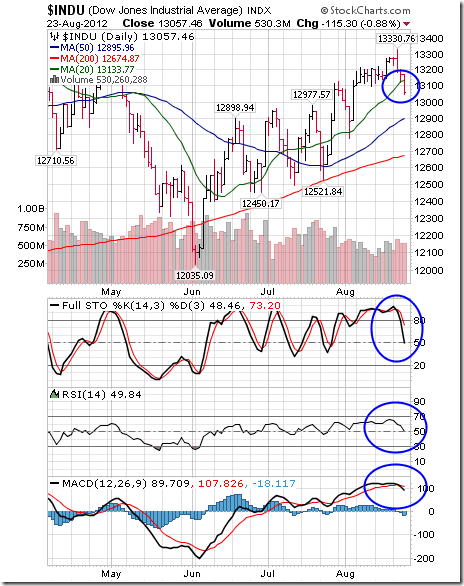 Weakness in equity market sparked an increase in the VIX Index. 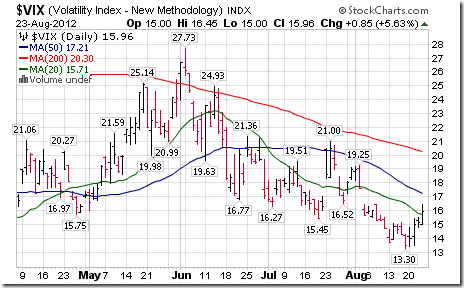 One of the weakest sectors yesterday was the steel sector following a downgrade by Dahlman Rose. (more)

The recent rally with gold and silver sort of crept up on many traders who were waiting for the Fed to announce the start of QE3. The rally started the first week of August with or without (?) more QE. The question mark reflects my personal opinion that more QE is flowing secretly, and not approved by Congress.

August 2nd was a date I described beforehand in my newsletter as very critical for the markets and gold. I felt that gold would be at high risk for a significant pullback on that day. Gold did take a hit that day however gold ended up faring much better than Knight Capitol Group, which almost became another MF Global on August 2nd. The pullback proved to be an entry point for long positions and below is a clip of what I wrote to my subscribers on July 29th.

We could see a significant move up for gold and silver near August 4th that could carry into August 25th-28th. There could be another setback at the end of August as well as more difficulties with the Comex deliveries/inventories/margin changes. Caution: There is high risk trading gold/silver.

Did you miss the rally? maybe not, we could see a pullback into September for a buying opportunity. The gold and silver market is trying to tell everyone what is coming, and the ‘what’ is inflation.

The CRB Index ($CRB) is breaking above its 200-day moving average after two failed attempts. Since first breaking below the 200-day in August 2011, this level marked resistance in early September and late February. With this week’s move above 305, the index broke the 200-day and exceeded the April 2011 trend line.

Click this image for a live chart
at 12:05 AM No comments:

What Next for Nat Gas?

The April low resides within an 8-month basing-accumulation pattern that has carved out a climb from 1.902 to 3.277, which represents the dominant intermediate-term uptrend.

Whatever Happened to $200 Oil? by Jeff Rubin

Four years ago, when I was still chief economist at CIBC World Markets, I forecast that global economic growth was on pace to send oil prices to $200 a barrel by 2012. In short, the argument was based on a supply-driven analysis that weighed the sources of future oil supply against the prices that would be needed to make the extraction and processing of that oil economically viable.

Since that call (which clearly hasn’t come to pass) received some attention at the time, it feels fitting to spend a few words discussing what happened to derail the projection. That particular analysis, unfortunately, didn’t adequately address the stifling impact that rising oil prices would have on economic growth. At the time, a constrained outlook for global production growth against a backdrop of runaway demand meant prices had nowhere to go but up. As subsequent events would dramatically demonstrate, though, triple-digit prices had a much more critical affect on demand than supply.

By the time oil reached $147 a barrel, the economic drag was more than sufficient to trigger a chain reaction of events—including spurring higher interest rates which pricked the US sub-prime mortgage bubble—that ushered in the deepest global recession of the post-war era. Instead of marching towards $200 a barrel, oil prices abruptly reversed course and plunged all the way to $40 a barrel.

The return of low prices was taken, by some, as proof that oil will continue to be as cheap and abundant as ever. As a quick return to the triple-digit range for oil prices indicates, however, that’s clearly not the case. My call for $200 oil was designed to underscore the massive cost of supplying the world with more than 90 million barrels a day. Then, as now, I stand by the analysis. Pumping out ever more barrels will require ever-higher prices. Just look at what happened when oil prices plunged. In Alberta’s tar patch alone some $50 billion in spending was either cancelled or postponed. The story was much the same offshore Brazil and in Venezuela’s heavy oil belt, a pair of locales that will play a vital role in meeting the world’s future oil needs.

If a mea culpa is in order, its roots can be found in the decision to underplay the demand side of the equation. Oil prices plunged to $40 a barrel after economic growth collapsed, taking global oil demand along for the ride. And that same movie is about to play out again. Recessions are already rolling across Europe. Economic growth in North America is lackluster, at best. Meanwhile, the specter of sovereign debt defaults in the euro zone continues to hang over global financial markets. Added up, it spells another sharp drop for oil prices not because fuel is abundant, but because once again the world can’t afford to stay out of a recession.

What happened to my forecast for $200 oil? Quite simply, the end of growth.