Global stocks are mixed with the European DJ Stoxx 50 Index up +0.29% at a 2-1/2 month high and June S&Ps down -2.30 points. The dollar and Treasuries are higher and most commodities are weaker. European markets are higher after being closed since last Thursday as they play catch up to the rally in US markets yesterday. The Apr Euro-Zone Sentix investor confidence rose a more-than-expected +7.0 to a 1-3/4 year high of 2.5. Basic resource companies rallied after yesterday's rise in crude oil to a 1-3/4 year high and the surge in copper to a 20-month high. Renault SA gained nearly 3% after people with direct knowledge of secret talks said that Renault, Nissan Motor and Daimler AG expect to save "billions of euros" by sharing development costs as part of an equity-swap alliance. Ryanair climbed 1.5% after Deutsche Bank upgraded the stock to "buy" from "hold" and Lafarge SA, the world's biggest cement maker, rose 2.7% after the Sawiris family purchased 6 million options in Lafarge which if exercised, would lead to an increase of 2.1% from the current Sawiris holding of 13.9% in Lafarge. The euro weakened after Market News cited unidentified officials as saying Greece might seek a rescue package that doesn't involve the IMF. Greece has been receiving information from the IMF about the conditions it would impose in return for aid and government officials found them to be "tough," and are concerned that they could result in civil unrest. (more)
at 7:50 AM No comments: Links to this post

Bonds with built-in protection against rating cuts are making up a record share of debt issues as investors hedge against a slowdown in the economic recovery.

Anheuser-Busch InBev NV, the brewer of Budweiser and Stella Artois, is among companies issuing so-called step-up bonds, whose interest increases if a borrower is downgraded. Sales surged to $37.3 billion in March, or 12.4 percent of all debt issued, according to data compiled by Bloomberg. Most of the notes are sold in the U.S., where almost half of bonds rated as so-called junk or on the cusp of non-investment grade include the protection. (more)

Silver Short Squeeze Could Be Imminent

On December 11th, 2009 NIA declared silver the best investment for the next decade. In our December 11th article, we said that it wasn't a coincidence that the very day Bear Stearns failed was the same day silver reached its multi-decade high of over $21 per ounce. We went on to say, "The reason why we believe the Federal Reserve was so eager to orchestrate a bailout of Bear Stearns, is because Bear Stearns was on the verge of being forced to cover their silver short position."

U.S. taxpayers earned an annualized 8.5 percent return from the government's bailout of 49 financial firms, underscoring efforts by the industry to speed up repayments and warrant repurchases, according to a report by SNL Financial.

Firms such as Citigroup, which still has common shares held by the U.S. Treasury Department, and rivals that have made partial redemptions were excluded from the analysis, SNL Financial said in a statement Monday.

So far, since the start of the program in late 2008, 64 institutions have fully repaid government aid. (more)
at 7:43 AM 1 comment: Links to this post

With summer driving season upon us, it's important to note that there's a traditional jump in gas prices. But will this seasonal adjustment benefit commodities, specifically oil and make the price of gasoline even higher? That could happen if those forms of energy lure investment from what seems to be an over-valued equities market, brought on by what some claim is cheap money.

On her April 5 program, "Closing Bell" host Maria Bartiromo asked CNBC's CME Group floor reporter Rick Santelli if a move higher in commodities was due to inflation. However, according to Santelli, it's not inflation but a move by investors out of a potentially over-valued equities market that will cause a rise in commodities. (more)

Health care may have been the last big bang of the Obama presidency.

With ferocious speed, the financial crisis, recession and efforts to combat the recession have swung the U.S. debt from worrisome to ruinous, promising to handcuff the administration.

Lost amid last month's passage of the new health care law, the Congressional Budget Office issued a report showing that within this decade, President Obama's own budget sends the U.S. government to a potential tipping point where the debt reaches 90 percent of gross domestic product. (more)

The U.S. office vacancy rate in the first quarter reached its highest level in 16 years, but the decline in rents eased and crept closer to stabilization, according to a report by real estate research firm Reis Inc.

The U.S. office vacancy rate rose to 17.2 percent, a level unseen since 1994, as the market lost about 11.6 million net square feet of occupied space during the first quarter, according to the report released on Monday. The U.S. vacancy rate inched up 0.2 percentage points from a quarter earlier and was 2 percent higher than a year ago.

"As labor markets stabilize, we expect occupancies and rents to require another 12 to 18 months before showing signs of improvement, given typical lags in commercial real estate," Reis director of research Victor Calanog said in a statement. "Even as occupancy continues to deteriorate, we're observing signs of renewed leasing activity across different metros." (more) 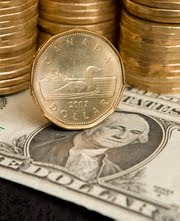 The high-flying loonie renewed its flight towards parity Monday, forcing firms and individuals to adjust to what many believe will become a new normal in the relative value of the two currencies.

Boosted by cycle-high prices for oil and commodities, the loonie soared to within a whisker of parity Monday, reaching as high as 99.87 cents US before closing at 99.72.

The currency has been flirting with par for more than a month, and economists believe it is now only a matter of time before the psychologically important barrier is breached. (more)

William Engdahl : US won't recover for at least 15 years

Rising steel prices -- a symptom of the nation's money printing -- are a harbinger of increases in other industries. Plus: The odd man out in the smart-phone market.
Pretend it's 1933, as so many in the deflation camp think it is or soon will be (at least from the price-of-everything standpoint). If last Wednesday you reached for a copy of that day's Financial Times, would you have expected to see the following headline -- "Steel prices set to soar: Everyday goods will cost more" -- in large print above the fold?
I don't think so.

The newspaper went on to say: "Global steel prices are set to rise by up to a third, pushing up the cost of everyday goods from cars to domestic appliances, after miners and steelmakers yesterday agreed to a ground-breaking change in the iron ore price system." (more)

Deflation on the prowl as Bernanke shuts down his printing press

The US Federal Reserve has completed its purchase of $1.7 trillion (£1.1bn) of mortgage securities, agency debt and US Treasuries, the conjuring trick of "credit easing" that allowed Ben Bernanke to create stimulus equal to 12pc of GDP.

The Fed's money creation has been more or less the size of Washington's borrowing needs for the last year, as Beijing notes with suspicion.

We will never know whether it was wise to go nuclear. My view – anathema to readers, I fear – is that Ben Bernanke and Britain's Mervyn King saved us from potential calamity. We were all too close to the tipping point illustrated in Irving Fisher's Debt Deflation Causes of Great Depressions, the moment when the sailing ship catches water and capsizes instead of righting itself by natural rhythm. (more)
at 3:37 AM No comments: Links to this post