Below is a list of the guests from the current show.
To listen to their entire interview, click on the link beside their name.

Test time: A neuroeconomic peek inside your brain's new strategy as we enter the "Doomsday Decade" and leave behind the "Lost Decade" ("lost" because the Dow dropped from 11,497 to 10,428 in 10 years, while Wall Street got rich wiping out almost 10% of your retirement funds). Test your 2010 strategy. Are you an ...
at 3:27 AM No comments: Links to this post

The Standard & Poor’s 500 Index will gain 8 percent after it jumped to a 15-month high, said Mary Ann Bartels, a Bank of America Corp. technical analyst.

Bartels, who predicted in October that U.S. stocks would plunge, said that call was “premature” and she now expects equity markets to add to the biggest yearly rally since 2003.

“In the near term more gains are likely,” Bartels wrote in a note to clients yesterday.

The advance in the first two days of this year lifted the S&P 500 out of a 3 percent range where trading was confined for most of November and December. The “breakout,” with more stocks rising than falling, suggests the index will climb to as much as 1,230, Bartels said. The S&P yesterday advanced 0.3 percent to 1,136.52, the highest level since October 2008. (more)

Take the following analysis with a grain of salt, but it appears China will be a massive force in the gold market this year, potentially blowing past India.

Thing is whether this is bullish or bearish remains open to debate. If China pulls ahead of India due to massive domestic gold consumption growth, it's a good thing, but if it's all due to Indians cutting back purchases in response to high gold prices, then it's more of a bad signal.

Commodity Online: But, the ray of hope for the bullion market is that China has fast emerged as the leader in gold buying. In fact, in 2009 China has pipped India to the post in gold purchases.

Chinese New Year gold rush has already begun, and robust demand looks likely to continue through 2010. So, in the coming years, analysts will be watching China, instead of India, to make their decisions on investments in gold. (more)

FEARS that Gordon Brown has left Britain on the brink of ­bankruptcy intensified last night as investors withdrew from backing the Treasury’s soaring debt.

US-based investment group Pimco, one of the world’s leading bond houses, said it will sell its UK government gilts this year.

It will be a hammer blow to the Treasury’s attempt to raise up to £200billion of government borrowing amid the deficit crisis.

The embarrassment is all the more acute because the younger brother of Cabinet minister Ed Balls is overseeing the gilt sale. (more)

POUND TO FALL BELOW EURO 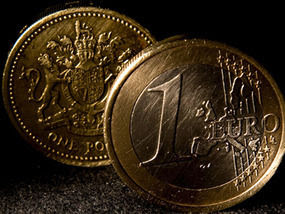 BRITAIN faces a “probable’’ sterling crisis before the general election, with economists predicting the value of the pound will fall below the euro.

It would be triggered if Labour dramatically narrowed the Tories’ poll lead. This would spark market concern that Britain would not get a new government committed to tackling the deficit, suggests the Centre for Economics and Business Research.

“The pound and the euro are like two equally-talented – or in this case untalented – downhill skiers racing each other,’’ it said. One euro is worth about 90p, but the currencies came close to parity about a year ago. (more)

Mutual Fund Cash Levels Do Not Support this Rally

As a group, mutual fund managers are as good a contrarian indicator for the stock market as they come. History shows that they hold relatively high cash levels at the beginning of a bull market. Then at the end of a bull market they don’t have much cash since they’re more or less fully invested.

And if you look at mutual fund cash levels in relation to the S&P 500 over the years, as shown in the chart below, you can easily spot this pattern. (more)

The number of U.S. metropolitan areas with jobless rates above 15% increased in November, according to government figures released Tuesday, despite the biggest one-month drop in the national rate in more than three years.

The Labor Department said 17 of 372 metropolitan areas surveyed suffered unemployment rates of at least 15% last month, up from 15 metro areas in October.

National unemployment improved to a seasonally adjusted 10% in November from the 26-year high of 10.2% hit in October. The rate had climbed for 12 out of the previous 13 months before November. Economists surveyed by Briefing.com expect the national rate to edge up to 10.1% when the Labor Department releases its December jobs report Friday. (more)
at 3:14 AM No comments: Links to this post 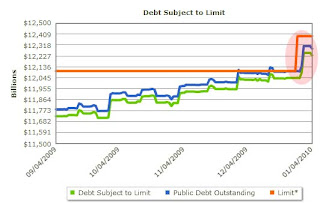 On December 24, the Senate passed a vote by a razor thin margin (with not a vote to spare) to raise the Federal debt ceiling from $12,104 billion to $12,394 billion. The actual debt ceiling increase took effect on December 28. And as the chart below shows, the Treasury's cash flow projections were spot on: 3 days later, and the debt subject to limit surged to $12,254, a jump of over $200 billion in 2 days, and a whopping $150 billion over the old debt ceiling. Three days is all the buffer the administration's reckless spending spree has afforded this country to avoid bankruptcy. Had one more Democratic vote dissented from the stopgap measure, the US would now be in technical default. There is just $140 billion left before the revised debt ceiling is breached. We hope for the country's sake that Bill refunding in January is massive, because as we already pointed out, on January 7th we expect another ~$130 of new Treasuries to be announced for auction by January 15th. And then there are two more weeks in January... Which is why the Treasury better be using that TARP money to pay down all it can, because if the general population understands how close this nation was to the fiscal brink, many more answers may be demanded out of the ruling party as to how it could allow things to get so out of hand. (more)
at 3:12 AM No comments: Links to this post

Even in a world of massive deficits and rising national debt, not many problems come in packages that are in the trillions of dollars. The deficit facing U.S. public pension funds will grow to $2 trillion, according to an interview that the chairman of New Jersey's pension fund, Orin Kramer, gave to the FT. "Estimates of aggregate funding requirement of the US pension system have ranged between $400bn and $500 bn, but Mr Kramer's analysis concluded that public funds would need to find more than $2,000bn to meet future pension obligations."

Even if Mr. Kramer is over estimating the problem, the question remains as to whether the problem can be solved so that state and municipal employees are paid their full retirement benefits. The answer is that it can't, and that these people will get much less than they were promised. Like many other Americans, they will face a shortfall in the money they have for their golden years. (more)
at 3:11 AM No comments: Links to this post