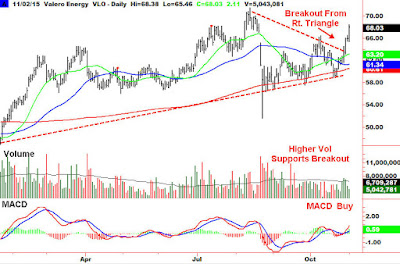 Valero Energy Corporation (VLO) — I featured VLO stock as the Sept. 9 , noting it was one of the few energy stocks that had not broken down through its long-term uptrend line. I recommended traders buy shares under $58 for a trade to $67.10, the top of the Aug. 21 gap down.
VLO stock trigged a buy on Sept. 28, hitting a low of $57.64, and then ran to a high above $68 on Monday. Traders who followed my advice made a gain of more than 17% in five weeks and may wish to take profits now.
However, this investment-grade stock is still appropriate for long-term buyers who could benefit from the company’s strong fundamentals.
On Oct. 28, the refiner reported better-than-expected earnings of $2.79 per share. Revenue of $22.6 billion also beat estimates, and management approved a 25% quarterly dividend increase. The company now pays 50 cents per share for a forward annual yield of 2.9%.
Following the earnings announcement, S&P Capital IQ Equity Research raised its 2015 EPS estimate by 41 cents to $8.65 and its 2016 forecast by 34 cents to $7.17.
Since breaking out in 2012 at about $25, VLO stock has been ramping up on a series of step ups. Support now rests slightly below its 200-day moving average, which is near $61.
A breakout occurred last week when VLO stock broke from its resistance line at under $66. As noted, traders may want to nail down a profit, but longer-term investors should either hold or add to their positions. This refiner is likely to break above its recent high at $71.50 and move on to Capital IQ’s target of $75.
at 12:03 AM No comments: Links to this post 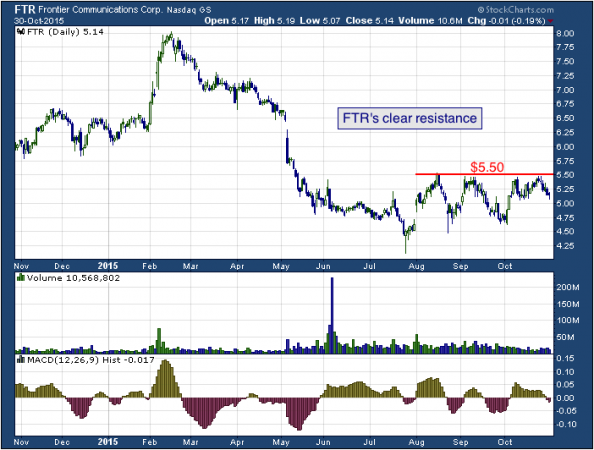 FTR went through a major decline from February into July. However, over the past 3 months the stock has created a key price level to watch at $5.50 (red). As you can see, FTR has tested that level multiple times since mid-August. A break above that $5.50 level should mean higher prices for the stock.

The Tale of the Tape: FTR has a key level of resistance at $5.50. A long trade could be entered on a break through that level. However, if you are bearish on the stock, a short trade could be made on any rallies up to $5.50.
at 12:03 AM No comments: Links to this post

How to Spot Buyout Clues in Today’s Resource Market 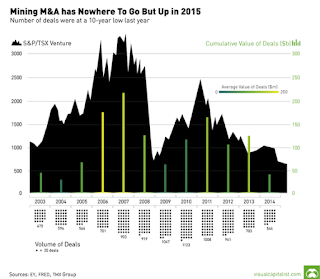 What if you could tell before a press release comes out that a company is poised to be bought out, possibly at a nice premium? Sounds good, right? By watching historic patterns, that might just be possible. The Gold Report reached out to experts who have been around through enough cycles to know and asked for the clues they watch that an acquisition might be imminent. From location and early investment to derisking levels, you just have to know what to look for to position yourself for a liquidity event.
There are certain points in market cycles where buyouts just make more sense than in others. Chen Lin, author of the popular stock newsletter What Is Chen Buying? What Is Chen Selling, sees a recent flurry of mergers and acquisitions (M&A) as an indication that we are, indeed, at the bottom of the gold market and can expect more consolidation—and at a premium. “We saw the start of a new phase of M&A happening when OceanaGold Corp. (OGC:TSX; OGC:ASX) bought Romarco Minerals Inc. (R:TSX), and Romarco shareholders realized a big premium for that,” he says. Add to that First Mining Finance Corp.’s (FF.TSX.V) merger with Gold Canyon Resources Inc. (GCU:TSX.V) and PC Gold Inc. (PKL:TSX). “Investors of those stocks were rewarded handsomely.” He continues, “A lot of companies with good balance sheets will try to take advantage of this downturn to pick up properties at rock bottom prices. This is actually a good time for those companies that can afford to do M&A.”
Continue Reading at TheAuReport.com…