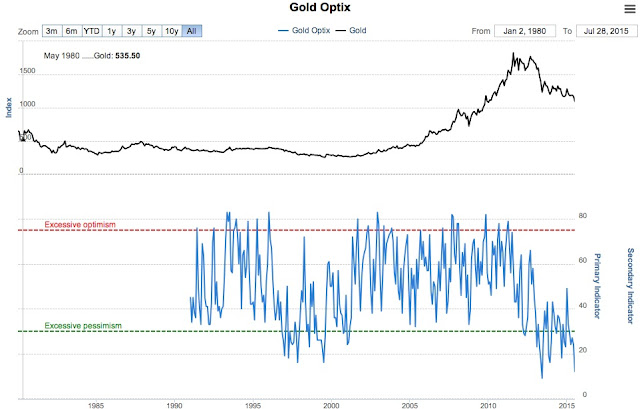 Jason Goepfert at SentimenTrader notes the astonishing sentiment reading in the gold market: "The latest Optimism Index readings for currencies and commodities showed that gold is still the most-hated contract. Its Optix of 12 was unchanged. It was slightly eclipsed in June 2013 otherwise this is the lowest sentiment for gold since December 1997.  (more)
at 12:03 AM No comments: Links to this post

As commodities in general remain weak, it was interesting to find cocoa of all things ending a rebound with a downside trend break. While I cannot offer statistically sound proof that companies using cocoa as an input, namely chocolate makers, perform better as the commodity falls it certainly could not hurt.

What I see now in Hershey (NYSE: HSY) is an upside trend break that occurred three days after the breakdown in cocoa. And I see a chance for traders to pick up a double-digit profit over the next few weeks.

Hershey is indeed a member of the consumer staples group, where companies' fortunes are not closely tied to the ups and downs of the economy. People will continue to buy products such as soap, cigarettes, makeup and food, even chocolate. Some may argue that the more nervous people get about their portfolios the more chocolate they might consume, but I digress.

HSY bounced off long-term support last month only days after announcing job cuts and a lower sales outlook on June 19. The price decline that day was sizeable and volume was exceptionally high to suggest some sort of selling climax and capitulation by the bulls. Even though prices drifted a bit lower, selling pressure was all but gone. Theoretically, everyone who wanted to sell had finally done so.

The vacuum of supply after a six-month downdraft left the stock exhausted. Cautious bulls nibbled and were not opposed. Then after rising to meet the January trendline, HSY punched through.

Conservative traders might wait for an inverted head-and-shoulders pattern to complete, but I believe the trend break following the rejection of bad news is enough to justify being early.

The first resistance exists at $96.50, near the May high and November breakout zone. The next resistance is in the $102.75 area, the top of the March-to-April trading range and the bottom of the December dip.

What is even more interesting is that both of these levels are approximate Fibonacci retracements of the 2015 decline. They are not exact, but they are close enough to demand respect.

Somewhere in the middle is the 200-day moving average, which I find useful as a trend gauge and not as a specific support or resistance level. Right now that average is flat and has been for the past year. As such, I would expect any rebound to overshoot it, and that is why I favor the higher resistance level as my price target here.

Speculators Could Land 25%-Plus With Alexion Pharmaceuticals $ALXN Stock 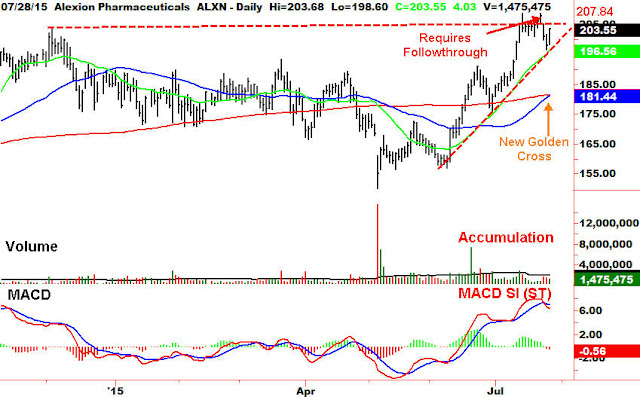 Alexion Pharmaceuticals, Inc. (ALXN) — This biotechnology company develops special antibody therapeutic products that target rare and severe diseases, including autoimmune disorders, inflammation and cancer.
Its flagship drug Soliris is currently approved to treat a rare genetic blood disorder. Alexion also developed asfotase alfa for treatment of patients with infantile- and juvenile-onset hypophosphatasia, which secured the FDA’s “Breakthrough Therapy” designation in 2013 and is likely to be approved in the United States later this year. Additionally, this innovative pharmaceutical developer is on the verge of several other breakthrough drugs.
JPMorgan Chase recently moved ALXN stock to an “overweight” rating, saying the company is “entering a data rich 12-24 months, which is [an] underappreciated point.”
Capital IQ rates ALXN stock a “buy” and expects sales of Soliris to increase 18.4% in 2015, following a 44% increase in 2014. Its analysts forecast operating earnings will increase 78% to $5.80 per share this year, with gross margins of about 91.5%. Their 12-month price target is $240, but at an estimated compounded annual growth rate of 26%, this could prove to be conservative.
Technically ALXN stock jumped from a low of about $157 in June to a high of $208.88 on Thursday, which approximately matches a high made in late 2014. The recent advance triggered a new golden cross, a long-term buy signal, as it moved higher along a short-term trendline and its 20-day moving average, now at $196.56.
ALXN stock is highly volatile, so under current market conditions it is likely that it can be bought at a much lower price. Therefore, my buy under price is $190. A stop-loss order should be entered at $175.
My trading target is $240, which could be achieved within three months. If so, ALXN stock would provide speculators with a return of more than 25%.
at 12:03 AM No comments: Links to this post

Adobe Systems Incorporated is a diversified software company worldwide. It operates in three segments: Digital Media, Digital Marketing, and Print and Publishing. The Digital Media segment provides tools and solutions that enable individuals, small and medium businesses, and enterprises to create, publish, promote, and monetize their digital content. The Digital Marketing segment offers solutions for how digital advertising and marketing are created, managed, executed, measured, and optimized. The Print and Publishing segment offers products and services, such as eLearning solutions, technical document publishing, Web application development, and high-end printing, as well as publishing needs of technical and business, and original equipment manufacturers (OEMs) printing businesses. The company markets and licenses its products and services directly to enterprise customers through its sales force, as well as to end-users through app stores and through its Website at adobe.com.
Take a look at the 1-year chart of Adobe (NASDAQ: ADBE) below with my added notations: 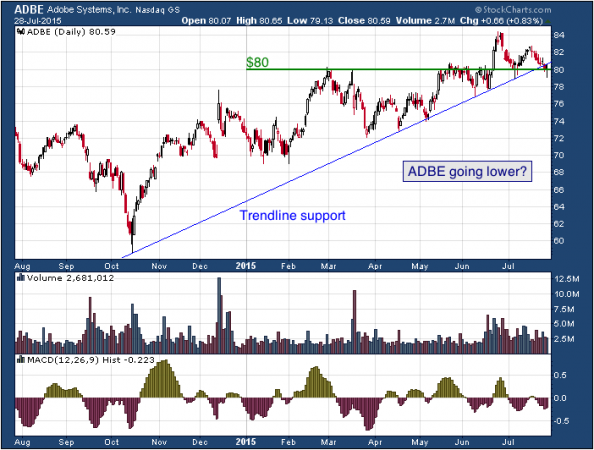 Over the last 10 months ADBE has slowly climbed higher. During that time the stock had also formed a nice trend line of support (blue). Always remember that any (2) points can start a trend line, but it’s the 3rd test and beyond that confirm its importance. ADBE’s trendline is very important. Earlier this week the stock broke that trendline, and now it currently sits on its key level of $80 (green).