BMO's Ablin: Stocks Could Be Headed to 'Bubble Territory' Like in 1999

The six-year bull market for stocks has further room to run, just like the market in the late 1990s, but we could be approaching a bubble similar to 1999 to 2000, says Jack Ablin, chief investment officer at BMO Private Bank.

All of this sets the stage for higher stock prices this year, Ablin said. The S&P 500 climbed 11.5 percent last year.

"I do think there are lingering problems we're not aware of, very similar to the late '90s. [And I think] that we will start to see some of the evidence of those stresses come to light this year. We just have to see how severe they are, or if we learned our lesson 20 years ago."

The move will be triggered largely by economic weakness overseas, he writes. "The eurozone will be in deflation by February, forlornly trying to ignite its damp wood by rubbing stones."

As for U.S. stocks, "the S&P 500 will not defy monetary gravity or the feedback loops of global stress for much longer," Evans-Pritchard says. He notes that about 50 percent of revenue for large U.S. companies comes from overseas. So a stronger dollar will hurt those companies.

"The S&P index measuring the price-to-sales ratio is higher today than at its pre-Lehman peak. Expect a shake-out of 20 percent, comparable to . . . 1998, . . . though don't be shocked by worse," Evans-Pritchard writes.

Caution: These 2 Charts Warn of a January Correction 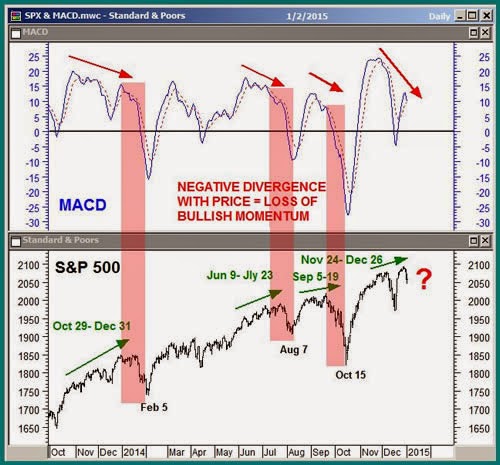 In last week's Market Outlook, I warned that continued weakness in the technology sector, which to a large degree drove the 2014 broad market advance, could become problematic, especially in January and February when seasonal factors begin to weigh on stocks. My fears may be materializing as all major U.S. indices closed lower last week, led by the tech bellwether Nasdaq 100, which lost 1.9%.

As long as technology is weak, and the small-cap Russell 2000 -- the other traditional market leader -- remains below its 1,213 March 2014, the stock market could be in for a tough January. (more) 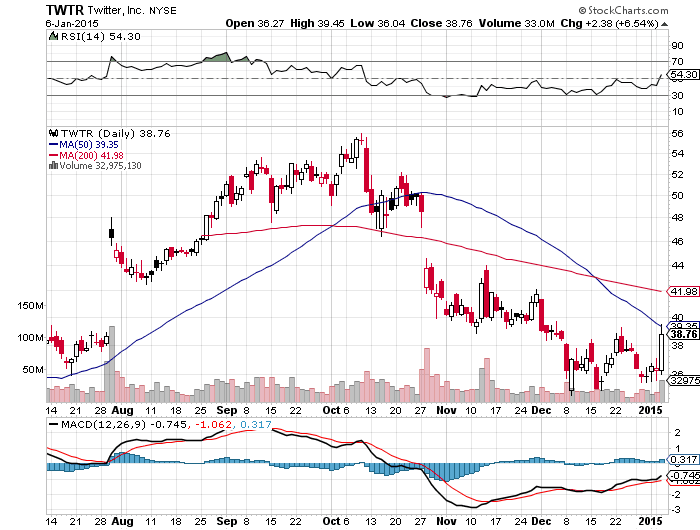 It was a tricky year for social media stocks. The top players continued to generate robust growth in user statistics. Yet many social media platforms have yet to translate traffic to real monetization and revenue growth.

Facebook, Inc. (Nasdaq: FB) is the obvious exception. The company delivered a range of solid growth metrics, and its shares have risen more than four-fold from 2012 lows.

The rest of the group hasn't kept pace. Shares of Yelp Inc. (NYSE: YELP) were down roughly 20% last year and professional platform LinkedIn Corp. (NYSE: LNKD), which continues to cement its industry leadership, was only able to squeak out a 7% gain.

In a moment, I'll mention my favorite social media stock for the year ahead, even though its shares sank more than 40% in 2014.  (more) 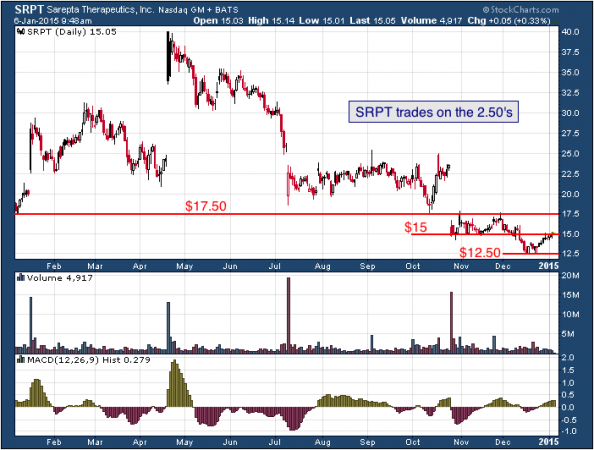 For the most part, SRPT has been trending lower for the last 8 months. However, during the most recent 3 months the stock has had a tendency of creating key price levels at the increments of $2.50 (red). For example, the current level of support is $12.50. Next, $15 has popped up a couple of times as both support and resistance, same thing with $17.50.

The Tale of the Tape: SRPT is approaching its key level of $15. A long trade could be made on a break above that level with a stop placed under it. A short trade could be made at $15 with the expectation of a fall down to the next $2.50 level at $12.50.
Please share this article
at 12:03 AM No comments: Links to this post

Stocks continued to retreat from their recent record highs on Tuesday, weighed down by an ongoing plunge in the price of oil. Bonds rallied as investors bought the safest assets, pushing the yield on the benchmark 10-year Treasury note back below 2 percent for the first time in three months.
The moves suggest that investors have little confidence the U.S. economy will continue to grow at the 5 percent annual pace reached in the final quarter of last year. As a consequence, company earnings will suffer. The reason for the gloomy prognosis is a slowdown in growth elsewhere in world, particularly Europe.

The slump in the price of oil, which dropped well below $50 a barrel Tuesday from $107 in June, has also prompted a sharp shift in investor sentiment. (more)