This little-known MLP just provided guidance that almost guarantees a 24% annual return for the next half decade or longer. That could turn every $1,000 invested into a whopping $2,963.21 in five short years. This has the potential to be one of those rare low risk, high growth investment opportunities. Get all the details now.

To keep up with what’s happening in the energy markets, one source I use is the daily Energy Journal put out by The Wall Street Journal. Today’s email is titled “The LNG Race Is On”. According to the WSJ, Royal Dutch Shell PLC’s massive $70 billion deal to buy BG Group PLC is the first shot in the global LNG race. Although the business is global, liquefied natural gas is poised to become the next great export for the U.S. energy industry. Later, I will reveal a little known way to very profitably participate in this transformative energy business. (more)

Stratasys Ltd. provides additive manufacturing (AM) solutions for the creation of parts used in the processes of designing and manufacturing products; and for the direct manufacture of end parts. Its AM systems utilize its patented fused deposition modeling and inkjet-based PolyJet technologies to enable the production of prototypes, tools used for production and manufactured goods directly from three-dimensional (3D) CAD files or other 3D content. The company offers entry-level desktop 3D printers for idea and design development, a range of systems for rapid prototyping, and production systems for direct digital manufacturing under the Dimension, Objet, Fortus, Polyjet, SolidScape, and MakerBot brands. The company also operates Thingiverse, an online community for sharing downloadable, digital 3D designs; and GrabCAD Community for mechanical engineers and designers.
Take a look at the 1-year chart of Stratasys (Nasdaq: SSYS) below with my added notations: 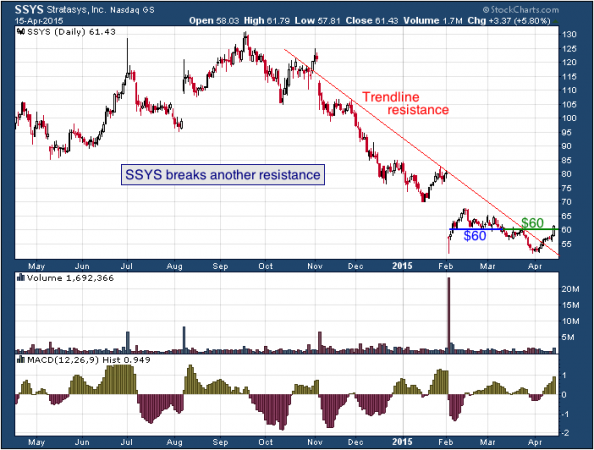 SSYS started a steady decline back in September that lasted until February. During that time the stock formed a very nice trendline of resistance, which was finally broken earlier in April. After breaking that level, SSYS made its back way to the $60 level that had not only been a prior support (blue), but it had also been a prior resistance (green) back in March. Now that the stock has broken above $60 too, higher prices should follow.

The Tale of the Tape: SSYS just broke back above $60. A long trade could be made at that level with a stop placed under it. However, a short trade could be considered on a break back below $60.
Please share this article
at 12:03 AM No comments: Links to this post

BP (NYSE: BP) : Avoid Missing Out on the Energy Rebound The first stock is integrated international oil giant BP (NYSE: BP). The former British Petroleum is still feeling the stain on its reputation from the 2010 Deepwater Horizon disaster in the Gulf of Mexico, and its stock price reflects it. In fact, it trades well below where it was before the accident.

But there is good news in that the technicals now point to a short-term rally. I am not suggesting BP will head back to pre-incident highs, but it is poised to make up some ground relative to its sector and the market as a whole.


For starters, the stock has pieced together a set of higher highs and higher lows since December. And that has caused the 50-day moving average to turn higher, along with a slight performance edge over the broader market during that time frame.

This week, BP challenged resistance from the February high at $42.10, closing above that level on Wednesday. In doing so, it scored an upside breakout from a visible, albeit unorthodox, inverted head-and-shoulders bottoming pattern. That target is the $49 area, which would put it above the 200-day moving average for the first time since July and offer a nice gain over the next few weeks.

Add in a fat 5.7% dividend yield, and even if the stock continues to lag, it remains a conservative way to participate in the energy rebound.

A Remarkable View Of The War In The Gold, Stock And Natural Gas Markets 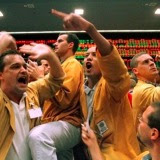 Today King World News is pleased to share a fantastic piece which give readers a remarkable view of the war in the gold, stock and natural gas markets. This piece also includes 3 key illustrations that all KWN readers around the world must see.
SentimenTrader: “Investors have been paying up for protection against a market decline in the four major index ETFs, though not to a degree that indicated panic in the past. As the bull market ages, they are becoming more and more willing to pay up, similar to 2007 (see chart below).
Continue Reading at KingWorldNews.com…
Please share this article
at 12:03 AM No comments: Links to this post