“The End is Near!”  For the ongoing Triangle Pattern in the S&P 500 right now at least.
We’ve successfully traded the “Ping-Pong” action between these levels but now it’s time to prepare for a likely breakout and new impulse swing in the market.
Which way?  And exactly what are the levels?  Let’s take a look! 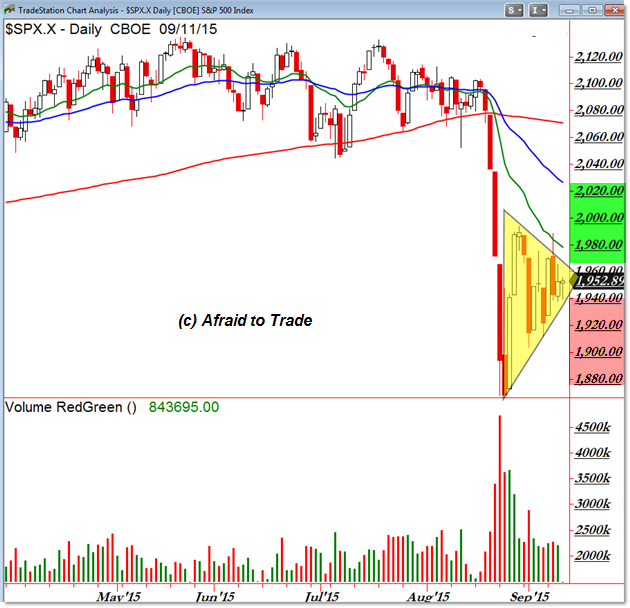 As I’ve been highlighting each evening to members, the S&P 500 (broader market) continued to trade within a compressing trendline environment which we can draw as a “Symmetrical Triangle” Price Pattern.
The strategy has been to play “Ping-Pong” or plan intraday trades (or even brief swing trades) on movements toward and away from these compressing trendlines.  (more)

Netflix (NASDAQ: NFLX) Could Plummet 20% in the Next Few Weeks

Arguably the hottest media stock of the past year, Netflix (NASDAQ: NFLX), has been in serious decline for the past five weeks. And by serious I mean it has shed nearly a quarter of its market capitalization since peaking in early August.

This has bargain hunters chomping at the bit. But a look at the chart tells us at its current "sale" price it is not cheap and could drop another 20% from here in a hurry.

In short, this is a stock for short-term bears that may present a good buying opportunity for long-term bulls in a few weeks.

Since this column focuses on trading, not long-term investing, let's take a look at the reasons why Netflix has a fork stuck in it. 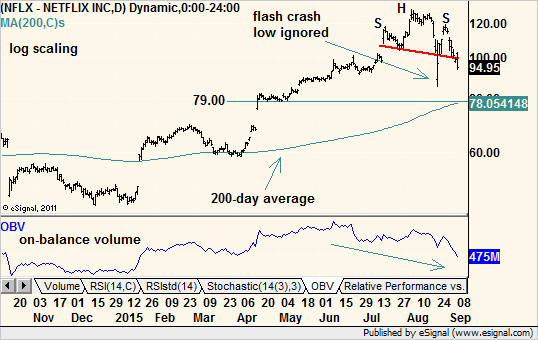 The rather obvious technical pattern on the chart is the ubiquitous head-and-shoulders with its central high (head) flanked by two lower highs (shoulders) on each side. The bottom of the pattern is bound by the neckline, which connects the troughs between the peaks. Whether it is drawn flat or with a slight downward slope from left to right is not important.

What is important is that Neflix closed below that neckline on Friday after the weak August jobs report. On Tuesday, when trading resumed after the long Labor Day weekend, it jumped with the rest of the market at the open on rumors that China would embark on a stimulus program.

However, unlike the Dow Jones Industrial Average, which went on to post a 390-point gain, Netflix found its daily high immediately and then sold off. Within minutes it gave up its gains, and by the close it was down nearly 4%.

In technical jargon, it was an intraday reversal to the downside and failure at the now-broken neckline. In other words, the initial euphoria wore off in a hurry as the bears grabbed the controls once again and the major trend to the downside reasserted itself.

Of course, in order for a head-and-shoulders pattern to form, prices necessarily must no longer be near their highs. A good deal of the decline is already in the past, but as I mentioned, there is plenty left for new bears to grab.

The downside target is the height of the pattern projected down from the breakdown point. On a linear scaled chart, that would be in the $72.50 area. However, I have found that projecting downside targets this way on stocks or indices that have seen very large price moves can result in levels that are too aggressive. For example, projecting a downside target in 2000 after the Internet bubble popped would have given the Nasdaq a negative number target. Clearly, that would be wrong.

That is why I start with a log scaled chart and then physically measure the pattern by holding a pencil or piece of paper up to my computer screen, grabbing the measurement and moving that down from the breakdown point. Rather than measure dollars, I measure pixels or millimeters.

For Netflix, this gives a downside target of $79. As supporting evidence, the 200-day moving average will rise up to that level in just a few weeks.

There are other technicals supporting the bearish view. They include falling momentum indicator peaks during the head-and-shoulders pattern, a shift in relative performance versus the market and falling on-balance volume since June. Money has been fleeing this stock and its very lofty trailing price-to-earnings (P/E) ratio.

Maybe Netflix has lost its luster and investors no longer give it the benefit of the doubt with crazy valuations. Or maybe its game-changing business model is already viewed as old hat now that competitors are trying to invade its space.

All of that is for fundamental analysts to hash out. What I see on the charts tells me that Netflix is done -- at least for now. It's time to ride the mo-mo train to the downside.

The Chart of the Day belongs to Loxo Oncology (LOXO).  I found the pharmaceutical preparations stock by using Barchart to sort the Russell 3000 Index stocks first by technical buy signals, then again my Weighted Alpha.  I then used the Flipchart feature to review the charts.   Since the Trend Spotter signaled a buy on 9/2 the stock gained 7.72%. 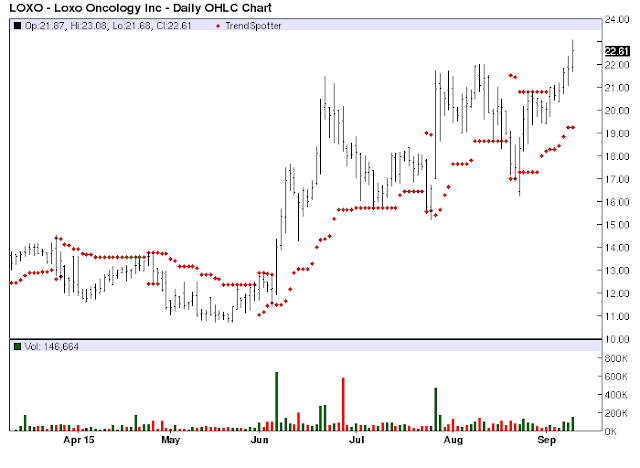 For the September USDA WASE report the trade was looking for the USDA to lower corn yield a little more than 2 bushels an acre.  The USDA did lower corn yield, but only 1.3 bushels an acre, less than trade expectations.  However, corn was still able to manage an almost 13 cent rally after quickly making new lows.  Why did corn have a bullish reaction to a seemingly bearish yield estimate?
While the USDA's September yield estimate for corn was less of a reduction than the trade had expected it was still a reduction nonetheless. This could be signaling that this is a trend where the USDA is now going to lower corn yield even further on subsequent reports.  And, while the corn yield estimate came in higher than expectations the more important number - new crop carry over - declined more than expectations.  This is where the bullish reaction likely came from.

The trade was looking for the new crop corn carry over to come in at just over 1.6 billion bushels and the USDA pegged it at 1.592.  This represents a fairly substantial reduction from where the USDA was at last month at 1.713 billion bushels.  Most of this reduction came from the old crop corn carry over (or beginning stocks) meaning that there will be less of last year's crop to take into the new year.  this is bullish for corn because it suggests that corn demand is stronger than expected and also could suggest that strong corn demand could carry over into the next marketing season.
At the end of the day the market read this report as bullish with yield numbers beginning to come down and demand staying relatively constant.  This could be the recipe for even smaller corn stocks in the future.  However, the time frame is something to consider as we gear up for harvest.  While most of the trade thinks that corn yields could be lower (maybe substantially lower)  than the USDA's estimate there may still be a lot of cash corn sold in the coming weeks and this could add some pressure to the market.  Longer term the corn outlook may be getting more positive on a few levels, but harvest pressure could keep things volatile in the near term. 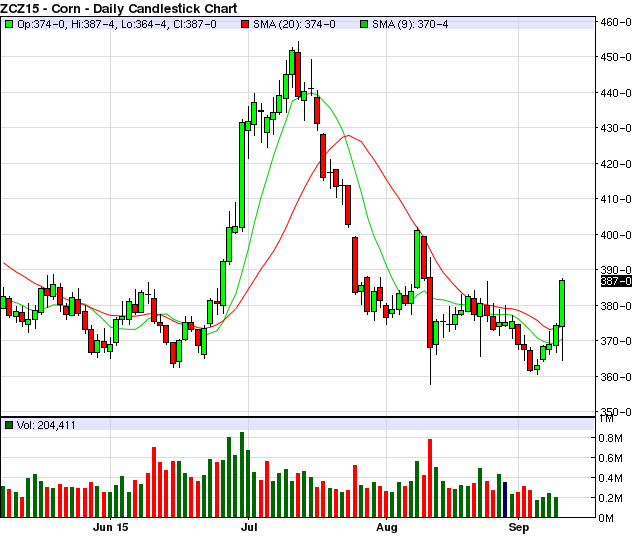 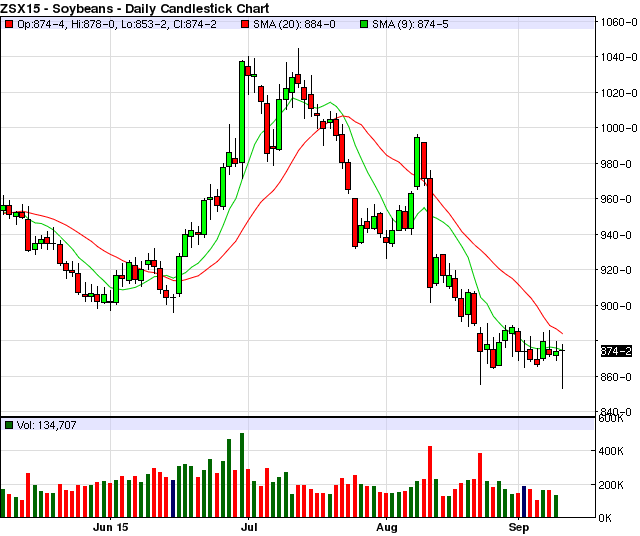 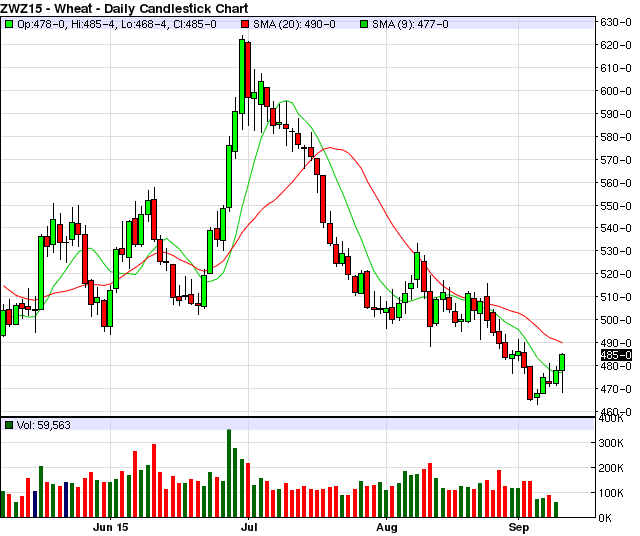