A 257% Opportunity in the World's Cheapest Stock Market

This particular country's stocks have to rise by 257%...

Today, I'll share a safe, simple strategy with you, with limited downside risk (you're risking less than 10%) – and triple-digit upside potential.

And this trade is not in some small, obscure country...

I'm talking about Japan – one of the world's largest countries. And the trade I recommend is a basket of Japanese stocks that trade on the U.S. stock market as an exchange-traded fund (ETF).

On average, they'd have to climb 257% to be in-line with the valuation of the Nasdaq Index, which holds a lot of small-cap U.S. stocks. Take a look:

Japanese stocks would have to soar by triple digits based on these major measures of value. (The average of these three numbers is 257%.)

In my opinion, the Nasdaq is not even very expensive. Japan is just SO cheap.

The last time Japanese stocks were this cheap was in the 1970s... And they absolutely soared...

More importantly, on a RELATIVE basis, this is the best value Japanese stocks have ever been.

It is crazy. Bonds pay less than 1% interest in Japan today. Meanwhile, stocks pay a dividend of greater than 2%. It's only a matter of time before Japanese investors start moving out of bonds and into stocks. They ought to do it sooner than later... It's the right thing to do.

Japanese investors have another good reason to buy as well... Based on the price-to-book ratio – a simple, clear measure of value – Japanese stocks are cheaper than they've been in decades.

My True Wealth Systems numbers "only" go back 30 or so years. But as you can see, right now, Japanese stocks are bumping along levels that are as cheap as they've ever been.

However, on my True Wealth newsletter's recommended list, I have shares of the WisdomTree Japan SmallCap Dividend Fund (DFJ). This ETF mimics the Japanese small-cap index. And there's a low-risk strategy for DFJ that could really make you some big money...

So you're risking a loss of less than 10%. But the important thing here is, your upside is hundreds of percent.

In short, you ought to own Japan... And with DFJ, you have an easy way to minimize your downside risk and maximize your gains.

The SPDR Gold Trust (NYSE:GLD) ETF seeks to replicate the price of gold bullion net of expenses, and is accurate in its pricing to gold because it holds physical metal. GLD rose from around $120 to over $188 last year, but since the double top of last August/September the trend has flattened, with support at about $150 and resistance at $165.

A reversal last week at precisely the low of December created a double bottom and the likelihood of a trading rally with a target of $165.

To review Extra Space’s stock, please take a look at the 1-year chart of EXR (Extra Space Storage, Inc.) below with my added notations: 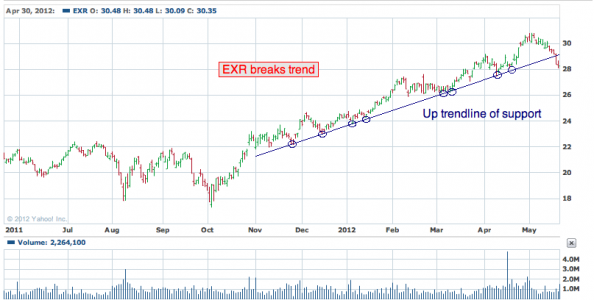 After bottoming at $18 in October of last year, EXR has been in a steady up trend ever since. While moving higher, the stock has formed a nice trend line of support (navy). Always remember that any (2) points can start a trend line, but it’s the 3rd test and beyond that confirm its importance. So, as you can see, EXR’s trend line support is very important. Last week the stock broke that level of support and should be moving lower overall from here.

The Tale of the Tape: EXR had created an up trend line of support over the last (7) months. Since that the support has broken, a short position could be entered now or on a rally back up to the previous trend line.

No matter what your strategy or when you decide to enter, always remember to use protective stops and you’ll be around for the next trade. Capital preservation is always key!

When to Buy Stocks

If you buy stocks at the wrong time, you’re going to lose money.

It doesn’t matter if you’re a long-term value investor or a short-term trader. When you’re dealing in stocks, timing isn’t everything — it’s the only thing.

As I was sorting through the mailbag this weekend, I found that many of your questions were about when to buy into a stock or a big investment idea. Today, I want to look at some of the potential trades and investments on your collective radar. I’ll analyze the charts and tell you if you’re looking at a solid buying opportunity — or a potentially disastrous trade…

What do you think of Cisco Systems (NASDAQ:CSCO) and Silvercorp Metals (NYSE:SVM)? Is now a good time to buy shares of both?

Yikes. Cisco is more or less a household name. But this chart is just awful. No one wants to own this stock — and with good reason. The company issued terrible earnings just last week — as evidenced by the massive gap down from $18.50 to $17.25. This gap will now act as resistance. So even though we’re seeing a decent rebound today to the high $16’s, I wouldn’t count on this stock recovering past the mid $17s anytime soon.

Any way you look at it, this thing is toxic. I would avoid it at any price. (more)

With continued volatility in major markets, as well as gold and silver, today King World News interviewed James Turk out of Europe. Turk included an extremely interesting chart for this interview. He discussed gold, silver, the mining shares and importantly, what to expect this summer. Here is what Turk had to say about the recent action in gold and silver: “The odds are improving that both gold and silver made an important low last week, Eric. I particularly like two things that happened last Thursday. First, gold jumped more than 1%, which is the limit regularly being imposed by the traders using mathematical algorithms in their attempt to cap the gold price.”

How to Time the Market with Momentum

If you were paying attention to the big momentum plays this quarter, you could have pinpointed when the market [2] was ready to turn lower.

Now, with short-term losses mounting, you might have the chance to spot [3] the first buying opportunity by monitoring these very same stocks. When the momentum names begin to catch a bid, we could see the beginnings of an oversold bounce that would send stocks higher in the short-term…

During the first half of 2012, investors fully dedicated their efforts to Wall Street [4]’s momentum darlings. These are the “hot stocks” in the midst of multimonth bull [5] runs. Expectations run high with these momentum names. Valuations run even higher.

It is a ridiculous notion to wait for a correction [6] (or even a pullback) before buying these red-hot stocks. After all, the share price will never fade. Or so the frenzied logic goes…

It’s probably no surprise to you that Apple was the de facto drum major of the momentum marching band. Apple shares [7] shot up more than $230 between Jan. 1 and mid-April — when the furious momentum rally finally topped out.

Apple’s pullback — and the eventual pullbacks in several other overhyped stocks — was inevitable. Apple was displaying all of the classic signs of a blowoff top. The investing public was convinced shares could go nowhere but up. Analysts and the financial media joined the party with their own irrational expectations, including $1,000-plus price projections and declarations that any fund manager [8] who didn’t own Apple should be immediately fired…

But just when the stock appeared to be completely unstoppable, shares abruptly reversed.

The selling wasn’t outright panic. As of this writing, it remains orderly. The market didn’t take an ax to the Apple tree. It only shook it a bit.

It’s how turning points are born. Shorts shake the branches to see if any weak hands fall from the tree. They’re after the low-hanging fruit. These are the folks who bought shares near the height of the rally. Their conviction is far weaker than that of the long-term investors sitting on substantial gains. So they sell. The selling puts enough downward pressure on the price to convince other longs to part with their shares.

Of course, disbelief prompts many buy-and-hold [9] investors to hold shares of a falling stock much longer than they probably should. There are (and will continue to be) many investors who will stand by Apple — even if its decline accelerates. After all, Apple is a great company that makes interesting, in-demand products. But even if expectations from Apple faithful remain high, we doubt the stocks’ incredible performance during the first half of 2012 will be matched anytime soon…

It wasn’t just technology or high-priced stocks that caught the attention of momentum investors.

I didn’t somehow predict the buying frenzy would begin as soon as we recommended the stock. We knew Smith & Wesson shares had held up well during the height of the European crisis last fall. And we had multiple fundamental reasons for picking up shares when we did.

From a fundamental perspective, Smith & Wesson was improving its operations. Management had already started the process of unloading the company’s underperforming security division. Revenue and guidance strengthened as management concentrated on building the company’s core gun manufacturing business.

Gun sales were growing across the board. In fact, gun sales actually booked a one-day record the day after Thanksgiving 2011. The FBI reported a record number of background checks, adding up to nearly 130,000 gun buyers on the day. The old record was set in 2008 — at only about 98,000.

Stories highlighting record-breaking sales throughout the gun industry began to gain traction in the media shortly after our initial recommendation. Attitudes regarding firearms ownership were improving. More and more women were taking to gun ranges across the country. These tangible stories took hold with investors — and the trend that initially pushed shares of Smith & Wesson above $4 in December began to accelerate. A momentum play was born.

By early April, Smith & Wesson shares more than doubled, to $8. With the successes of high-priced momentum plays fresh in their minds, traders and investors jumped at the opportunity to own shares of this fast-moving stock.

But Smith & Wesson was not immune to the momentum sell-off. Shares gave back more than $1 in a matter of hours in early May as new concerns over the economy [11] and eurozone surfaced. Shares have recovered somewhat. And we’re still hanging onto open gains of approximately 95%. But the warning bell has sounded. It’s time to be extra vigilant as skittish investors rush to raise cash during uncertain market conditions.

While the secret of Smith & Wesson’s potential is now more widely known, the stock has a much better chance at weathering the momentum sell-off than some of the more closely followed names on the market. Traders shook Smith & Wesson’s tree. But investors have stepped back up to the plate and bought back shares.

Only time will tell if the stock will consolidate and move higher from here. If Smith & Wesson and other momentum names catch a bid, we could get our first signal of a move higher.

The "Chart of the Day" is Isis Pharmaceuticals (ISIS), which showed up on Monday's Barchart "52-week High" list. Isis on Monday posted a new 1-year high of $9.42 and closed up 5.14%. TrendSpotter has been long since May 10 at $8.95. In recent news on the stock, Isis reported Q1 EPS of -24 cents, which was slightly better than expectations of -26 cents. Piper Jaffray on May 1 upgraded Isis to Overweight from Neutral and raised its price target to $15 from $10. Isis Pharmaceuticals, with a market cap of $900 million, is a leading genomics-based drug discovery and development company that is focused on RNA.