Is This the Bottom In Corn? 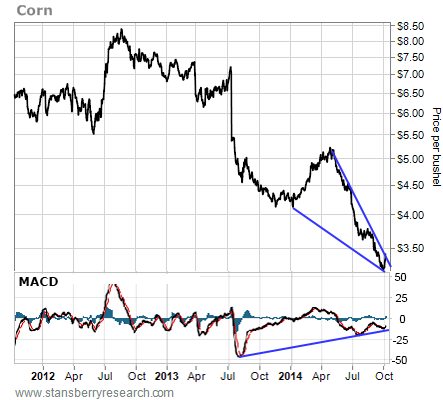 Once again... it's time to take profits on coffee.
In June, we took a second shot at the "trade of the year" by buying coffee.
Traders who took our advice to buy the iPath Dow Jones-AIG Coffee Total Return Sub-Index exchange-traded note (JO) are sitting on double-digit gains today.
But now it's time to take those gains off the table and put them in the next commodity set to rally...
Before we get to today's opportunity, let's take a look at coffee...(more)
Please share this article
at 12:05 AM No comments:

kingworldnews.com / October 9, 2014
In the aftermath of the release of the Fed Minutes and the chaos that ensued immediately afterward in major markets, today King World News spoke with the man the Fed called on to execute QE1 and who also set up the Fed’s massive trading room, former Fed member and former Managing Director at Morgan Stanley, Andrew Huszar.  What he had to say will surprise KWN readers around the world.  Below is what Huszard had to say in this fascinating interview.

Eric King:  “Andrew, yesterday we had the release of the Federal Open Market Committee Minutes and instantly all hell broke loose in major markets.”

Huszar:  “It’s interesting because if I go back to when I was at the Fed in 2010 and 2011 — and people forget this — but you had the markets anticipating rate rises in the next few months.  You had certain Fed presidents, particularly the more hawkish ones, encouraging the drumbeat of rate hikes.  As we’ve seen repeatedly over the last five years, the market has overshot expectations about how quickly the Fed is going to pull the punchbowl back.  So once again, after a pretty bearish day yesterday, the market is pleasantly surprised that the Fed appears to be far more dovish than anticipated…..
READ MORE
Please share this article
at 12:04 AM No comments:

Market Volatility: Octobers in the Dow 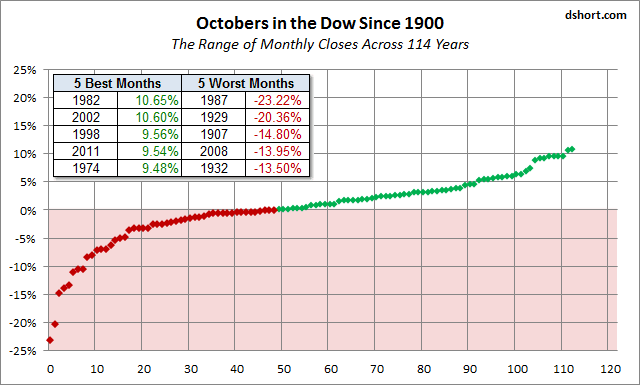 October 8th, 2014 Doug Short
Anyone who follows the mainstream financial press is seeing an increasing number of articles about bear market risk. Today's Bloomberg guest piece by Barry Ritholtz is a classic example: Signs of a Bull Market Turning Bear.

The growth in investor anxiety is happening in October, historically the most volatile month for market performance. I took a few minutes to update a couple of charts to illustrate October volatility using the Dow and starting in 1900.
More…Please share this article
at 12:03 AM No comments:

“THERE IS NO WAY TO STOP THIS!” – V The Guerrilla Economist