10.Change "BP" from "British Petroleum" to "Bunnies and Puppies"
9.Scrap the snotty British accents
8.Cry on "Oprah"
7.Take a page from AFLAC. New mascot: wise-cranking oil-soaked duck
6.Find Bin Laden
5.Start making cookies. Who doesn't love cookies?
4.What's wrong with our image?
3.Switch from "Drill Baby Drill" to "Help Daddy Help"
2.Instead of their image, maybe they can focus on fixing the damn leak!
1.For goodness sakes, get Iron Man to do something!

Courtesy of CBS
at 12:57 AM No comments: Links to this post

Finding gold in the mainstream

Gold can no longer be dismissed as the asset of choice for fringe types.

The New York Times dedicated a chunk of last Sunday's paper to gold as a mainstream investment. In other words, gold is now legit -- no longer can it be dismissed as the asset of choice for fringe types with a cellar full of canned goods and a stash of bullion buried in the backyard.

And to illustrate just how far gold has moved into the American mainstream, the paper goes bipartisan by holding up investor George Soros on the left and commentator Glenn Beck on the right as examples of the newly converted. (more)

Slide in shipping shows global recovery running out of steam 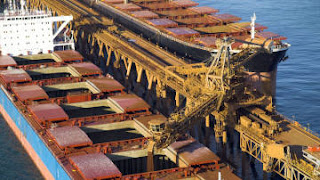 Europe’s woes are showing early signs of stalling the recovery of global .

The Baltic Dry Index, a measure of global shipping that is followed closely by economists, is suddenly raising red flags over the pace of the economic rebound. The reading released daily by the Baltic Exchange has been sinking every trading day for the past three weeks, measuring a 34-per-cent drop in ocean freight rates and foreshadowing a slowdown in trade.

The index declined 3.8 per cent Thursday to 2,784 points, reflecting the slump in the shipping industry’s prices to transport dry raw materials over 26 global routes. Economists watch the index because the amount of raw materials being shipped – from coal to grain to iron ore – provides a key indicator of consumption and manufacturing trends. (more)

China's decision to move away from its currency peg might mean the yuan weakens against the dollar instead of strengthens as Washington wants, Nouriel Roubini, one of Wall Street's most closely followed economists, said on Saturday.

"This is the first significant signal in years of a change in Chinese currency policy," Roubini, best known for having predicted the U.S. housing meltdown, told Reuters.

But it remains to be seen how China would put the new system into practice including the composition of a basket of currencies that Beijing will use as a reference point for the yuan -- also known as the renminbi -- and the base date for that basket, he said in an e-mail. (more)

The dollar's strong (but not the one you think) 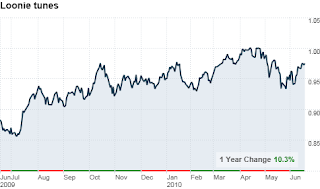 There has been a lot of talk lately about how strong the dollar is. But if you're looking for a real strong dollar, just gaze north.

Sure, the greenback has done great against the euro. But that's not saying much. The U.S. dollar is still a proverbial 97-pound weakling compared to the Canadian dollar.

Canada's dollar, commonly referred to as the "loonie" since the coin features an image of a loon on the back, has been trouncing its counterpart below the 49th parallel. It's up 3% against the greenback so far this year and 10% over the past 12 months.

With that in mind, some experts say that investors looking for save havens should buy Canadian. (more)

Change from the dollar Cash in on currency turmoil using these mutual funds, ETFs

Probably not euros or pounds or yen. Yet U.S. investors who may not know rupees from ringgits are buying and selling foreign currencies both as a hedge against their U.S. dollar holdings and as a way to speculate on global economic upheaval.

They're more interested than usual, of course, because of the turmoil that has cut the value of the euro by 14% this year while upending other benchmark currencies.

Indeed, foreign currencies have been surging into the investing mainstream. Almost $6.5 billion was invested in currency-based exchange-traded funds as of the end of May, up 65% from a year earlier, according to National Stock Exchange data. (more) 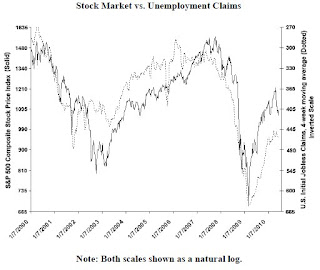 Movements in the U.S. stock market have been highly correlated to the unemployment data released each week by the government, according to a recent report.

Since 2000, changes in the four-week moving average of the number of people filing for new unemployment insurance benefits have been inversely related to the weekly movements of the S&P 500 index. In other words, as claims have risen, the market has fallen (and vice versa). The correlation is strong and statistically significant, according to James Paulsen, chief investment officer at Wells Capital Management and the author of the report.

For many investors, this finding is something of a coup. The weekly jobless claims report is sometimes brushed aside by market watchers and pundits in favor of the broader monthly unemployment report. However, the new study suggests investors might have more – or at least as much – success by doing the opposite, or at least paying the weekly number more attention. (more)

4 stocks and ETFs for the coming rally in oil prices

While it looked like they were headed towards the $90 a barrel level, oil prices hit a wall in the spring. Rattled investors who worried about the direction of the global economy shunned black gold in favor of real gold as a means of preserving capital.

But don't be fooled. The spring retreat simply set the stage for a second-half rally.

At work in that period was the same shaky market sentiment that wreaked havoc on global equities. Fears that rising debt levels in Europe and other developed economies would lead to another financial meltdown, and that China and other emerging markets would not be able to sustain their high levels of growth robbed oil prices of the momentum they'd built up last year. (more) 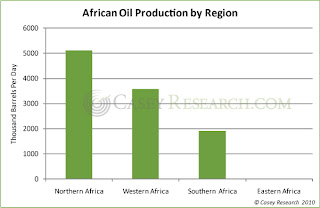 As the world hesitantly emerges from recession, the one question that seems to be on the lips of investors everywhere is: what’s next? As the tragedy continues to unfold in the Gulf of Mexico, with no fix in sight, market attention has suddenly shifted to the energy sector after years of neglect. Pundits and would-be energy experts are a dime a dozen. Speculation about oversold or underbought oil abounds.

But the real profits in energy won’t be made anywhere near the Gulf and have little to do with going long or short on BP or Transocean.

They’ll come from being the first to arrive on the newest scene, getting there before the crowds do. The current economic climate has opened up doors to some exciting opportunities around the world. Discovering which of these is going to be the next big winner, however, can be quite the challenge. (more)

Elliott Wave Prediction: Is the Dow Heading for Another Plunge? 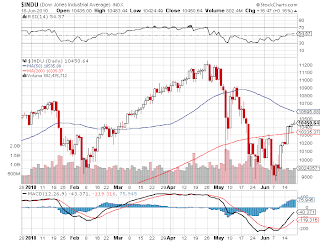 Think the market's bad enough now? If you believe the Elliott Wave Principle, a market-analysis theory that predicted the 2008 fall, you can expect it to get much worse.

Stock analyst Robert Prechter, who uses the principle in his financial forecasts at Elliott Wave International, predicts the market will suffer a cataclysmic collapse in the next six years. The firm's monthly Elliott Wave Theorist newsletter forecasts that the Dow Jones Industrial Average ($DJI) will lose more than 90% of its value in that time, MarketWatch reported last week.

For some investors, such pessimism is doubtless difficult to understand. Despite fears of a double-dip recession and frequently disappointing macroeconomic data, an actual decimation of the market seems unfathomable. Even during the Great Recession, the Dow didn't fall below 6,000. Imagine what a full 5,000 points below that would be like. (more)

A two-week advance looks to continue this week, as investors consider the latest on the global economy -- but the early summer correction may not be over.

After slumping almost 14% in six weeks, stocks, as measured by the broad S&P 500, have now gained back just over 6% in the past two weeks. That's good news for investors who were worried that the correction -- a selloff of more than 10% from the highs -- would become a bear market, a selloff of over 20%.

But the stock recovery has been mostly technical and trading-driven, rather than based on changes in the underlying issues that sparked the selling in the first place. That factor suggests another bump down is coming, perhaps later in the summer. (more)