Is Crude About to Make Major Gains? Chris Vermeulen

Neurocrine Biosciences, Inc. discovers and develops pharmaceuticals for the treatment of neurological and endocrine-related diseases and disorders in the United States. The company’s products in clinical development stage include elagolix, which is in Phase III study for endometriosis; elagolix that is in Phase IIb study for uterine fibroids; Corticotropin-Releasing Factor Receptor1 Antagonist, which is in Phase I/II study for congenital adrenal hyperplasia and stress-related disorders; and Vesicular Monoamine Transporter 2 Inhibitor (VMAT2) that is in Phase III study for movement disorders, as well as Phase I study for tourette syndrome. Its research programs comprise VMAT2 for movement disorders, bipolar disorders, and schizophrenia; gonadotropin-releasing hormone (GnRH) antagonists for men’s and women’s health, and oncology; antiepileptic drugs for epilepsy, essential tremor, and pain; and G Protein-Coupled receptors for other conditions. The company also develops pharmaceutical products for tardive dyskinesia, and other neurological and endocrine-related diseases and disorders.
Take a look at the 1-year chart of Neurocrine (NASDAQ: NBIX) below with added notations: 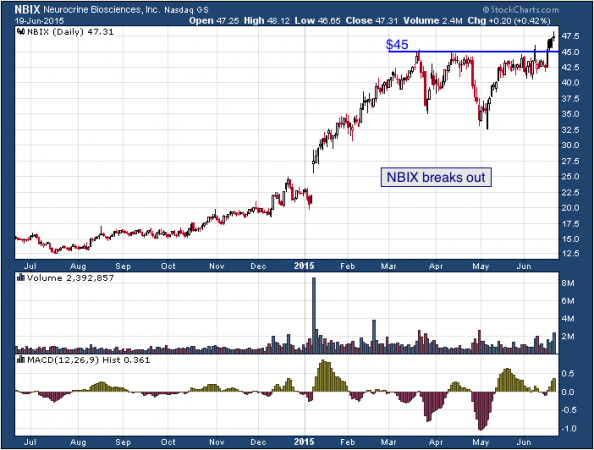 NBIX started from a $12 low back in July of last year and rallied from that low up to a $45 high in March. From there, the stock hit $45 as resistance a few more times forming a solid 52-week high resistance at $45 (blue). Last week the stock broke through that level, which should lead to higher prices overall.

The Tale of the Tape: NBIX broke its 52-week resistance at $45. The possible long position on the stock would be on a pullback down to that level with a stop placed under it. A break back below $45 could negate the forecast for a move higher.
Please share this article
at 12:03 AM No comments: Links to this post