VMware (NYSE:VMW) — This subsidiary of EMC Corp. (NYSE:EMC) is an acknowledged leader in virtualization software and cloud infrastructure. The company’s innovative approach is illustrated by its recent offer to allow customers to “test drive” a cloud built on the VMware vCloud platform.

Technically VMW has been trading in a jagged 12-month rectangle with a high at $115. Thursday’s breakout from a “V” bottom through its 200-day moving average should run it to the high of the current pattern at $115.

To see a confirmed Inverse H&S pattern, please take a look at the 1-year chart of DTV (DIRECTV) below with my added notations: 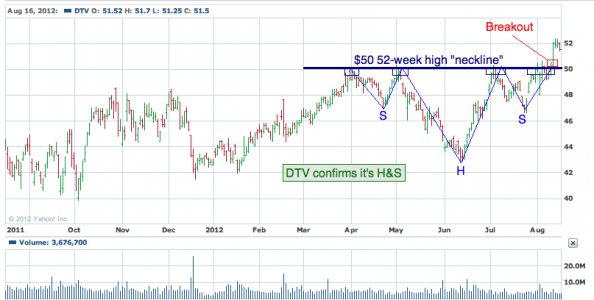 DTV formed an Inverse H&S (blue) over the last (4) months. I have noted the head (H) and the shoulders (S) to make the pattern more visible. DTV's "neckline" resistance was at the $50 level (navy). DTV confirmed the pattern by breaking up through the $50 resistance and has already started moving higher.

Keep in mind that simple is usually better. Had I never pointed out this Inverse H&S pattern, one would still think this stock is moving higher simply if it broke through the $50 resistance level. So, whether you noticed the pattern or not, the trade would still be the same: On the break above the key $50 level, which by the way, was also a 52-week high breakout.

The Tale of the Tape: DTV formed an Inverse Head & Shoulders pattern and confirmed it earlier this week. A long trade should be entered on a pullback to the $50 level with a stop placed under that level.

My System Signals a "Sell" and a "Buy" in Emerging Markets

It's time to "sell" a portfolio holding that has outperformed the market and add a security that looks ready to take off, according to my market-beating, "ROC" system.

I believe that systems take the emotion out of trading, and that is why I follow them. System rules are developed in advance based on logic and back tested so we can be sure the logic is sound. Instead of letting headlines determine when I trade, by following rules, I've seen double-digit returns in bull and bear markets.

The logic I start with is that you should buy stocks and ETFs that are going up and sell them when they are going down. I know that sounds glib, but there are ways to define "going up" and "going down" with some simple math.

There are a number of finance professors who use what they call momentum to do that. They've shown that buying the stocks with the strongest momentum and selling when momentum slows outperforms the market over time.

As traders, we define momentum in terms of relative strength (RS). The stocks or ETFs with the most momentum will have the highest RS. There are a number of different ways to define RS, including proprietary systems used by Investor's Business Daily and Value Line. But I think the simplest way is to use a 26-week rate of change (ROC) calculation. With this system, we buy the ETFs that have the highest ROC and sell when ROC falls.

All buys come after sells, and this week, we are selling one of the positions we have held since we started monitoring this portfolio. iShares MSCI Philippines (NYSE: EPHE) is being sold after performing exactly like a high RS holding should. EPHE has delivered a market-beating gain of 10.81% since being added to the portfolio on May 25. That was better than the S&P 500, which gained 6.85% over that time, and the iShares MSCI Emerging Markets ETF (NYSE: EEM), which gained 8.64%.

EPHE is still trading near its 52-week high, but the RS has collapsed in the past two weeks, a signal that there are better trading opportunities available.

In the chart below, I've converted RS into a MACD-style indicator called the Momentum of Comparative Strength (MoCS). The indicator fell below its moving average only two weeks ago, and has fallen more than 40% in that time. Breakdowns in MoCS often come right before big price declines.

After selling EPHE, the system is signaling a buy in iShares MSCI Turkey (NYSE: TUR).

This chart shows a strong MoCS that is moving higher and is above the moving average. Price is testing support and MoCS indicates that support should hold. TUR is a volatile ETF and can move very quickly.

The Organization for Economic Co-operation and Development (OECD) expects Turkey to enjoy economic growth of 3.3% this year and 4.6% next year with moderate inflation and unemployment. While growing faster than many other economies, Turkey's stock market is trading at a low price-to-earnings (P/E) ratio of 8. The P/E ratio on the S&P 500 is about 13, and EEM has a P/E ratio of 10. TUR is a bargain with high RS.

The markets responded to Cisco's earnings report by gapping the stock price higher. In general this means that there is upward pressure on long-term yields as well as a reasonable trend for the dollar.

Below is a comparison between 10-year Treasury yields and the share price of Cisco .

Cisco 'gapped' higher last August right in front of the start of dollar strength and a week or two ahead of the absolute peak for gold prices. This past March Cisco 'gapped' to the down side as yields moved to new lows.

To the extent that stock prices 'gap' on unexpectedly positive or negative news there tends to be some follow through in the direction of the gap in the ensuing weeks. The chart argues that 10-year yields trend with Cisco which suggests- to us- that yields look higher.

The comparison below shows Goldman Sachs , the spread or difference between platinum and gold futures prices, and the share price of Carnival .

The spread between platinum and gold tends to go with yields so it was not too surprising to see platinum futures prices rise by more than 3% in trading yesterday. The share price of Goldman Sachs has been leading the rally by moving up from the 90 level so, in the absence of a return to crisis mode in the Eurozone, the path of least resistance for platinum and yields appeared higher.

The share price of Carnival is rather intriguing in that it is a difficult stock to classify. Some view it as part of the consumer sector although we argue that it is more of a cyclical. The last time the cyclical trend shifted from negative to positive Carnival went on an upward voyage as its share price tripled into 2005.

The point is that if, as, or when the markets shift over from defensive to aggressive we would expect to see a fairly steady rise in yields along with a return to relative strength by the economically sensitive stock markets sectors.

We have been showing negative perspectives on the bond market for some time but have been reluctant to 'stick a fork' into it until the yen started to weaken against both the dollar and euro.

Below is a comparison between the cross rate between the Japanese yen and euro along with the U.S. 30-year T-Bond futures.

The point is that the yen/euro cross rate broke the rising support line in trading yesterday confirming the weakness in the TBond futures.

The argument is that as long as the TBond futures trade above the 200-day e.m.a. line the trend is still somewhat 'defensive'. Obviously bond prices are falling rather rapidly back to the moving average line but the first serious test for support still lies ahead.

The picture that we have in mind for the bond market looks something like the Hang Seng Index from 1997. The chart below shows how the Hang Seng Index busted down to the moving average line in August and then held the line into the end of the quarter.

While the TBond futures still have considerable work left to do the comparison to Hong Kong in 1997 has some appeal to us. In theory this could lead to the TBonds moving back into the mid-120's by the fourth quarter of this year or into the initial quarter of 2013. The markets have tended to focus on expanding growth through the first quarter of each year so it might make sense to look for upward pressure on yields into the early spring of next year.

Thursday, Brent Oil met its secondary upside target zone of $115.00, and has since pulled back a bit.

Let's notice that my 4-hour momentum gauge shows a glaring divergence at yesterday's high, which, if nothing else, is a near-term warning signal that the up-move off of the June 21st low at $88.49 (+30%) is complete, and that the likelihood of a significant correction is increasing.

The "Chart of the Day" is Discover Financial Services (DFS), which showed up on Thursday's Barchart "All-Time High" list. Discover on Thursday posted an all-time high at $38.02 and closed up +2.61%. TrendSpotter has been long Discover since June 29 at $34.58. In recent news on the stock, Discover announced Thursday that it is partnering with Google to allow cardmembers to save their credit card directly into Google Wallet by logging into the online Account Center at discover.com/googlewallet. This will give Discover cardmembers the ability to tap and pay for purchases in-store in conjunction with the Google Wallet application on a compatible Near Field Communication (NFC) smartphone, as well as make purchases online. On Wednesday, Discover reported a July delinquency rate of 1.83%, down from 1.88% in June, and that its July net charge-offs fell to 2.22% from 2.40% in June. Discover Financial Services, with a market cap of $18.902 billion, operates the Discover Card with more than fifty million cardmembers, the Discover Network with millions of merchant and cash access locations, and the Goldfish credit card business in the United Kingdom. Discover Financial Services also operates the pulse ATM/debit network, which serves more than 4,400 financial institutions and includes nearly 260,000 ATMs, as well as POS terminals, nationwide.