It is vital to understand that what we face is by no means the plain vanilla version of governments just printing into hyperinflation. These people are fighting back as is ALWAYS the case with core and major economies. The German hyperinflation took place AFTER a revolution with a unstable government that lacked credit. When there is “credit” then government FIRST tries to keep the game afoot and that means the bankers threaten they will collapse unless debt is serviced. This is why the FIRST response is all out financial war against the people.

Literally, you will PRAY for only hyperinflation. Society CAN survive that. It cannot and has NEVER survived an all out Sovereign Debt Crisis. I hope to have a book out this year on this subject covering NOT my OPINION, but uncovering every event and how do empires, nations, and city states die. There is just too much bullshit out there. There is a danger that unless we turn back, we could end up in World War III and a new Dark Age. One reader wrote:


Am following your reasoning about hyperinflation etc and very illuminating it is. I can appreciate deflation overwhelming printing and forcing the USD higher — in which case tangible asset protection becomes a chimera? As you also say the USD will be the last to plummet during a bond collapse ( inflationary?) so then tangibles rise? Separately you said earlier that any gold held had better be in coin form,I believe you were talking in the context of the underground economy. Ditto Silver coins? Am an avid daily reader of the blog and greatly indebted to you for throwing light over the darkening scene.

The USD will rise FIRST because the Sovereign Debt Crisis emerges on the peripheral of the core economy. Today that is Europe and Japan. I had a front row seat with the Euro since the commission came to us and attended our London conference taking the whole back row. As Europe and Japan implode, capital rushes from one currency to the next and that pushes the dollar higher. As the dollar soars, currency wars and trade wars always follows. The rise in the dollar will reverse the trend on the debt and it will appreciate in “real terms”. When I met with the US Treasury back during the Reagan Administration to argue against the rate hikes of Volcker, using that simple pocket calculator the debt would jump 800% by the end of the decade of the ’80s. I was told point-blank, it was ok because they would be paying back with cheaper dollars. (more)

"Euro Crisis Will Return Shortly And With A Vengeance"

For all the groundless, starry-eyed optimism permeating Europe's bureaucratic corridors of the fading oligarchy these days (because this time is not like every other time that, too, was different), there has always existed one sure, never-fail antidote: Germany, which without fail has managed to ground Europe any time its delusion of grandure hit escape velocity. Sure enough, while all the statist soothsayers who threatened with armageddon if the outcome of the Italian elections happened to be precisely the one that transpired, were stuck in backpedal mode, and scrambling to calm nerves that all shall be well after all, one person who refuses to play by the script is Lars Feld, member of panel of economic advisers to German Chancellor Angela Merkel, who in an interview with the Frankfurter Allgemeine Zeitung tomorrow says the euro crisis is to return shortly and "with a vengeance" as capital loss will lead to higher risk premiums for Italy’s interest rates.
From Handelsblatt, previewing the FAZ Wednesday edition:


The Italian economy would not find their way out of the recession, according to the pessimistic assessment by Lars Feld: "The sustainability of Italian public finances is in jeopardy. The euro crisis will therefore return shortly with a vengeance."

Apparently, the Italians were not ready to move on the path of reform that has been taken by Mr. Mario Monti, Field said.

"You can not expect that Italy's European partners or the ECB will stabilize the Italian economy, when its people are not ready for reform."


And making sure Feld is not alone, he was joined by Anton Boerner, head of Germany’s BGA exporters’ association, who in turn said Italy must reform tax, labor, judicial system or risk "irreparable damage" of euro. Finally, Boerner says if Italy not willing to reform, "we have to think about how to deal with a modified eurozone."
What exactly a "modified" eurozone means we don't know. We will, however, surely find out soon enough. 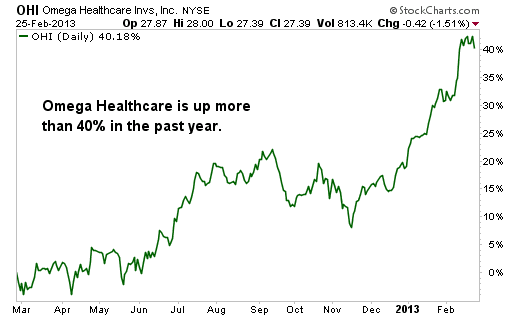 The aging U.S. population is one of the most powerful social trends in the country. Retirees searching for income are one of the most powerful financial forces in the market. When you add the two together, you have the perfect cocktail of growth and income.
With the U.S. Federal Reserve punishing retirees by smashing interest rates into the ground, yield-hungry investors continue to turn away from traditional income safe havens like Treasury and investment-grade corporate bonds. One of the places they are turning to is real estate investment trusts (REITs). The key feature of a REIT is that its corporate structure requires it to pay 90% of its income to its limited partners, or unit holders.

This corporate structure has produced some very high yields during this time of record-low interest rates.

After last weeks plunge in gold prices I expect a little more upside near the $1639 level before this starts it’s final leg down to the $1400 level. And when you check out the monthly chart below a drop of $200 is nothing.. (nooothing) when you compare the move it has had for all of 2000. I personally would like to see it drop even further as the more fear that happens when this drop the better.
When the monthly RSI gets to 40 start to watch for signs of support on the chart…and buy into that fear. I warn you it will be difficult as everyone will be declaring the gold bull market over. My analysis suggests that anybody buying now will be underwater very soon, but a great long term buying opportunity in gold could be a few months away.

Trading bias – I would either be short or neutral looking to add to shorts in the coming days to weeks. I would not be long gold right now as there is too much risk to the downside.

What Happens Next After the Italian Elections?

Chart of the Day - Clorox (CLX)

Clorox Company's business operations, represented by the aggregate of its U.S. Household Products and Canada, U.S. Specialty Products and International segments, include the production and marketing of non-durable consumer products sold primarily through grocery and other retail stores.

Traders Could More Than Double Their Money With This Oil Play: PBR

The Brazil turnaround story garnered headlines and investors' attention in the first half of the last decade. But the past two years have seen an economic slowdown and a pullback in stock prices that I believe signals a great long-term buying opportunity.

The drop in oil prices, after a double-digit gain from $85 in December to $98 in February, has seen energy stocks unwinding. But global political risks and potential disruption concerns always provide bullish price shock possibilities in crude.

I see the combination of Brazil and rising oil prices as an investment theme that is likely to do well in the future.