Since May 22 - the first day Federal Reserve Chairman Ben Bernanke hinted at "tapering" quantitative easing - the S&P 500 has fallen nearly 7% while the yield of the 10-year Treasury note has risen from 1.89% to 2.55%.

Some of the hardest hit stocks during this selloff have been those with strong yields as higher interest rates have made their dividends comparatively less attractive.

But is this selloff in dividend stocks overdone?
The Fed Giveth, the Fed Taketh Away
A common misperception is that over the last couple of years, yield-starved investors bid up all dividend stocks to untenable valuations and that this recent selloff is just a normal correction for these overbought securities.
That may be the case for some dividend stocks - but not all.
In fact, one of the hardest hit groups has been real estate investment trusts (REITs). But there are many REITs with strong fundamentals there were trading at very reasonable prices before the recent "dividend off" trade. (more)

Italy is likely to need an EU rescue within six months as the country slides into deeper economic crisis and a credit crunch spreads to large companies, a top Italian bank has warned privately.
by Ambrose Evans-Pritchard
Telegraph.co.uk

Mediobanca, Italy’s second biggest bank, said its “index of solvency risk” for Italy was already flashing warning signs as the worldwide bond rout continued into a second week, pushing up borrowing costs.
“Time is running out fast,” said Mediobanca’s top analyst, Antonio Guglielmi, in a confidential client note. “The Italian macro situation has not improved over the last quarter, rather the contrary. Some 160 large corporates in Italy are now in special crisis administration.”
The report warned that Italy will “inevitably end up in an EU bail-out request” over the next six months, unless it can count on low borrowing costs and a broader recovery.
Continue Reading at Telegraph.co.uk…
Please share this article
at 12:05 AM No comments: Links to this post 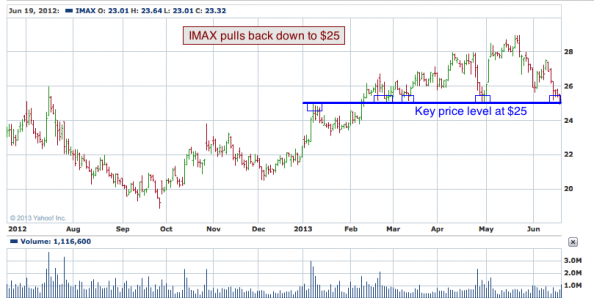 IMAX has been holding a very important level of support at $25 (blue) since the middle of February. No matter what the market has or has not done over that period of time, IMAX has held that $25 level, which was also a brief resistance in January. The stock approaching $25 again should provide another bounce higher, but if the overall market continues to sell-off, IMAX could break that support.
The Tale of the Tape: IMAX has a very good level of support at $25. A trader could enter a long position at $25 with a stop placed under the level. If the stock were to break below the support, a short position would be recommended instead.
Please share this article
at 12:04 AM No comments: Links to this post

Goodbye housing (non)recovery… except for those private equity-cum-landlord firms and offshore oligarchs who pay all cash of course. “The 30-year fixed mortgage rate on Zillow(R) Mortgage Marketplace is currently 4.38 percent, up fifty basis points from 3.88 percent at this time last week. The 30-year fixed mortgage rate hovered between 3.82 and 4 percent late last week, before spiking up near the current rate over the weekend. This represents the highest rate on Zillow Mortgage Marketplace since July 2011.”
Read More @ ZeroHedge.com

Chinese Stocks Drop To Lowest Since Jan 2009; Down 20% From Feb Highs

zerohedge.com / By Tyler Durden / June 24, 2013, 21:48 -0400
With US equities 7.5% off their all-time highs and on the verge of instigating a ‘Markets In Turmoil’ special, we thought it perhaps of note that the growth engine of the world continues to see real turmoil. Short-term funding rates remain elevated (7-day repo jumping 240bps to 10% today) as the ‘engineered’ credit crunch continues for China. The Shanghai Composite opened down today, crossing the 20% drop level from the recent Feb highs (and -16.5% in the last 16 days!)pushing the index to its lowest level since January 2009.