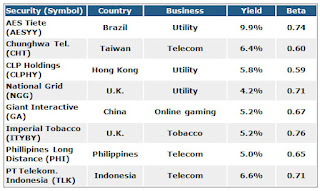 Here's an old Wall Street [1] saying that investors should "Sell in May and go away." While there's no identifiable rationale to explain why that should be good advice, there is an element of empirical truth. A study by Plexus Asset management shows that since 1950 the returns for the S&P 500 in the months of November through May were 8.1%, compared with just 2.4% for the period from May through October. [James Brumley, one of our talented analysts, recently warned investors about putting too much stock in this, though. Go here to read his take [2].]
The MSCI World Index, a popular index [3] of global stock market [4] performance, shows a similar seasonal pattern. In fact, returns for the MSCI World Index in the months of May through October over the same post-1950 era are negative. The old adage to sell in May has gained even more prominence over the past two years, as stocks have endured gut-wrenching corrections in the summers of 2010 and 2011, only to enjoy powerful year-end and New Year rallies.
I'd never recommend managing your portfolio using simplistic seasonal rules, but it's only prudent for investors to contemplate the potential for at least a short-term correction [5] in global equity markets.  (more)
at 12:08 AM No comments: Links to this post

THE OUTLOOK FOR HOUSING IS STILL DISMAL

The growing optimism on housing is not justified. Not only is the recent data disappointing, but the overhang of shadow inventories threatens to keep the housing market depressed for some time to come. We’ll begin with a look at the data. Existing home sales were down 2.6% in March, the second straight monthly decline. Sales remain depressed, and are still 37% below the peak during the boom. The purchase index for the latest reported week was down 11%, and is down 15% from a year earlier. New housing starts dropped for the second consecutive month to a paltry 654,000. It topped out at 2,273,000 in January 2006. The NAHB housing index for April dropped back to its early January level. It remains at 25, compared to a peak reading of 70. The latest Case/Shiller report show year-over-year national average price declines of 4% To find anything encouraging in these numbers is quite a stretch. In addition to the data already reported, it is difficult to be optimistic about the period ahead. Although the bulls talk a great deal about the decline in inventories of homes for sale, keep in mind that the official inventory numbers include only homes that are now on the market, and ignores the importance of the so-called “shadow inventories” that loom over the industry like the sword of Damocles. The shadow inventories include houses that are not now on the market, but are either delinquent on mortgage payments, in default, owned by banks or are in some stage of the foreclosure process. Estimates of the number of houses in this category vary anywhere between 2 million and 10 million. (more)
at 12:06 AM No comments: Links to this post

How to Profit from the Bakken Oil Shale Boom

Did you ever wish you'd been around for the California gold rush of 1849? Or the Texas oil boom of the early 1900s?

Maybe you can't go back in time, but you don't have to.

The Bakken oil shale boom going on in North Dakota right now is just as big-if not bigger.

Just take a look at what's been happening in Williston, ND, the epicenter of the Bakken oil shale boom.

The flood of jobs has made Williston the fastest-growing small city in the United States.

Consequently, there was no collapse in home prices in Williston. The inrush of new employees to work the Bakken oil shale boom has actually created a housing shortage.

The rapid population growth from the Bakken oil shale boom has left many people sleeping in cars and tents. Williston just this week was forced to pass an ordinance that makes it illegal to live in a camper within city limits.

And while other states have been cutting services, shedding jobs and raising taxes, North Dakota is building up the state trust fund and reducing property taxes. All that, and still it projects a $1 billion surplus for its two-year budget.  (more)
at 12:06 AM No comments: Links to this post

Martin Armstrong: Happy Tax Day Welcome to America - Land not of the Free - but of Economic Slaves 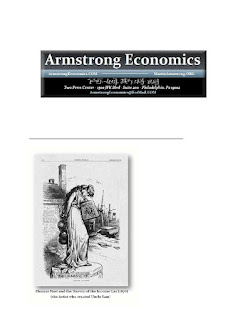 The Income Investing Chart You Don't Want to Miss...

Sometimes it takes guts to be an income investor.
A few weeks ago, the S&P 500 closed above 1,400 for the first time since May 2008, before the Lehman Brothers collapse led off the financial crisis. In total, the index [1] has gained a remarkable 11% so far this year (compared with 0% for all of last year).
That's good news, right?
Well, lower-yielding financials and tech stocks have led the move higher, while defensive high-yield utilities and master-limited partnerships (MLPs) have lagged to the downside.
For instance, the Alerian MLP Index is up less than 1% year-to-date, while the utility sector, down more than 3%, is currently the worst-performing sector in the S&P 500.
Last year, these two groups outperformed as nervous investors sought safe dividend [2] returns amid volatile markets. This year, however, the reverse started taking place. Financial and technology companies listed on the S&P 500 have risen about 17%.
Investors have taken more chances on increased signs of economic recovery in the United States and easing concerns about Europe's debt crisis. As a result, some are investing their capital into riskier sectors, such as energy, that can benefit from economic growth.  (more)
at 12:04 AM No comments: Links to this post

The Depart of Transportation's Federal Highway Commission has released the latest report on Traffic Volume Trends, data through February. Travel on all roads and streets changed by 1.8% (3.9 billion vehicle miles) for February 2012 as compared with February 2011. The 12-month moving average increased by 0.14%. This is the third month of increase after nine consecutive months of decline (PDF report).
Here is a chart that illustrates this data series from its inception in 1970. I'm plotting the "Moving 12-Month Total on ALL Roads," as the DOT terms it. See Figure 1 in the PDF report, which charts the data from 1987. My start date is 1971 because I'm incorporating all the available data from the DOT spreadsheets.

The rolling 12-month miles driven contracted from its all-time high for 39 months during the stagflation of the late 1970s to early 1980s, a double-dip recession era. The most recent dip has lasted for 50 months and counting — a new record, but the trough to date was in November 2011.  (more)
at 12:04 AM No comments: Links to this post