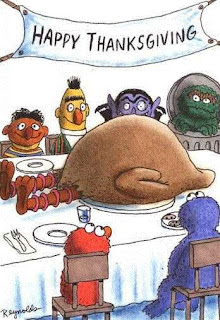 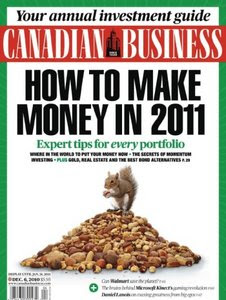 Canadian Business – Insight and fresh ideas have never been more essential to success, and the new Canadian Business is a magazine all about those ideas. With more topical stories, more original reporting and more compelling voices, every issue of Canadian Business provides business leaders with the analysis and perspective on the issues, trends and personalities that are shaping the future of our economy.

read more here
at 12:20 AM No comments: Links to this post

Ireland, the Euro, & the Future: An Interview with Ambrose Evans-Pritchard

Ambrose Evans-Pritchard is the international business editor of the Daily Telegraph. A long-time opponent of the EU’s constitution and monetary union, he was the Telegraph’s Europe correspondent in Brussels from 1999 to 2004.

China and Russia have decided to renounce the US dollar and resort to using their own currencies for bilateral trade, Premier Wen Jiabao and his Russian counterpart Vladimir Putin announced late on Tuesday.

Chinese experts said the move reflected closer relations between Beijing and Moscow and is not aimed at challenging the dollar, but to protect their domestic economies.

"About trade settlement, we have decided to use our own currencies," Putin said at a joint news conference with Wen in St. Petersburg.

The two countries were accustomed to using other currencies, especially the dollar, for bilateral trade. Since the financial crisis, however, high-ranking officials on both sides began to explore other possibilities.

The yuan has now started trading against the Russian rouble in the Chinese interbank market, while the renminbi will soon be allowed to trade against the rouble in Russia, Putin said.

"That has forged an important step in bilateral trade and it is a result of the consolidated financial systems of world countries," he said.

Putin made his remarks after a meeting with Wen. They also officiated at a signing ceremony for 12 documents, including energy cooperation. (more)

Martin Armstrong: Show Me The Money 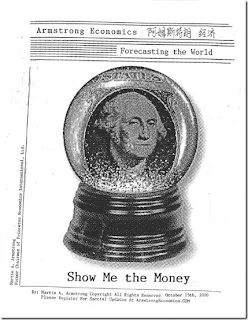 If you wish to eliminate the noise that we have been going through in the Irish euro manipulation, I suggest you print out Armstrong’s October 15th article titled "Show me the Money."

His discussion of each important currency is done with a long term chart and technical discussion. Take each currency and staple the two pages together.

Each week review the currencies in terms of the technical discussions and implications.

Applications for unemployment benefits in the U.S. fell more than forecast last week to the lowest level since July 2008, reinforcing evidence the labor market is healing.

Jobless claims declined by 34,000 to 407,000 in the week ended Nov. 20, Labor Department figures showed today in Washington. The median projection of economists surveyed by Bloomberg News called for a drop to 435,000. The total number of people receiving unemployment insurance decreased to the lowest in two years, and those on extended payments also fell.

Fewer firings lay the groundwork for a pickup in job creation that will generate incomes and spur consumer spending, which accounts for 70 percent of the economy. Even with companies firing fewer workers, unemployment will be slow to decline, according to the Federal Reserve’s latest forecast in which policy makers also lowered their growth projections. (more)

Stocks jump on upbeat data with stocks in tight range

(Reuters) - Wall Street rallied as stock investors put aside worries about swirling global problems on Wednesday, turning to improvement in the labor market and signs consumers are ready to open their wallets ahead of the biggest shopping day of the year.

New claims for unemployment benefits hit their lowest level in more than two years last week while consumer spending rose for a fourth straight month in October, suggesting the economy is nearing a self-sustaining recovery.

The data boosted enthusiasm in the consumer sector, which has outperformed all year, as Black Friday, a key date for retailers and the traditional kickoff to the year-end shopping season, approached. (more)
at 12:06 AM No comments: Links to this post