Gold Traders and Investors Get Ready To Rumble

Gold has plummeted 17.5% dropping from $1600 down to $1320 per ounce with silver and gold stocks falling also they are now headline news once again. This move has caused some serious damage to the charts when looking at it from a technical analysis point of view. Below are some basic analysis points that show a new swing trading entry point.

The Technical Traders Chart Analysis:
Broken Support – Once a support level has been broken it becomes resistance. Gold is trading under a major resistance level.
Momentum Bursts - Since the April 15th low, gold has been setting up for another short selling entry point. Remember the market tends to move in bursts of three, seven or ten days then price reverses direction or pauses. It has now been 10 days.
Moving Average Resistance – Gold has worked its way up to the 20 day moving average which can act as resistance.
Bearish Inside Bars – This type of chart pattern points to lower prices. When there is a big down day followed by 3, 7 or 10 up days inside the price action of the down bar we can typically expect another sharp drop which tests the recent lows as shown with the arrow on the chart.

Gold Short Selling Conclusion:
In short, gold is setting up for a low risk entry point that should allow us to profit from lower gold prices. Using an inverse ETF like DZZ or even the gold mining stock inverse ETF DUST could be played. These funds go up in value as the price of gold falls.
While I expect gold to pullback, I do not think it will make another leg lower. Instead, a test of the recent low or pierce of the low by a few bucks then reverse and start building a bullish basing pattern before going higher.
Please share this article
at 12:06 AM No comments: Links to this post

shtfplan.com / By Mac Slavo /
Which asset is more secure than money in the bank?
The answer is simple.
It’s the asset that will still have value when the money or the bank collapse.
All over the world, when people have been faced with the prospect of having their savings wiped out or confiscated they have turned to hard assets – physical goods they could hold in their possession and trade if necessary – as protection.
Argentina, a country that is no stranger to economic hard times and hyperinflation, gives us a prime example of what becomes money when the system collapses.
At an inflation rate of 25%, while their currency loses significant purchasing power, Argentines have made a mad rush into gold, silver, and other tangible goods that retain their barterable value.
Like many Greeks, who have headed to the countryside to grow their own food in the midst of complete economic destruction, farmers in Argentina are hoarding the one tangible investment they know will not lose value, no matter what their currency does.


With world food demand on the rise, growers in the Pampas grain belt are filling their silos with soy rather than converting their crops into pesos, a currency that hit a new all-time low in informal trade this week.

Facebook, Inc. operates as a social networking company worldwide. It builds various tools that enable users to connect, share, discover, and communicate with each other on mobile devices and computers. The company's Facebook Platform is a set of development tools and application programming interfaces that enables developers to integrate with Facebook for creating social apps and Websites. As of December 31, 2012, it had 1.06 billion monthly active users and 618 million daily active users. The company has a strategic partnership with Trend Micro Inc. for educating and protecting users' digital lives against malicious sites and malware. Facebook, Inc. was incorporated in 2004 and is headquartered in Menlo Park, California.
Please take a look at the 1-year chart of FB (Facebook, Inc.) below with my added notations: FB has been holding a very important level of support at $25 (navy) for the last (5) months. No matter what the market has or has not done over that period of time, FB has not broken below that $25 support level. The stock approaching $25 again should provide another bounce higher. However, if the overall market were to sell-off, FB could break that support.
The Tale of the Tape: FB has a very strong level of support at $25. A trader could enter a long position at $25 with a stop placed under the level. If the stock were to break below the support, a short position would be recommended instead.
Please share this article
at 12:05 AM No comments: Links to this post

Doesn't $2.50 per gallon for gasoline sound just dandy? During the 2012 presidential race, a couple candidates used that number as a way of showing how increased American production would lead to lower prices and higher energy security. The problem is, though, that despite the increase in production in the U.S., cheap gas and cheap oil will more than likely remain a pipe dream.
Let's look at why oil prices will remain high despite our best efforts.

Drilling costs just aren't what they used to be

The boom in U.S. energy has been made possible by several factors: development of advanced drilling technology, a large distribution network already in place, and a favorable regulatory framework. One element that is commonly overlooked, though, is the price of oil production. Accessing shale deposits requires not only deeper wells, but also much more energy for extraction. Today, wells are drilled for miles underground and cracked open with high pressure pumps and lots of water. Chesapeake Energy (NYSE: CHK  ) estimates that each new well requires 5 million gallons of water. Despite the best efforts of exploration and production companies to reduce costs, these new drilling techniques have break-even wellhead prices for most U.S. shale plays at $55-$80 per barrel.

The U.S. is not the only country that needs expensive oil prices. Both Russia and Saudi Arabia, the two largest global oil producers, need high oil prices for economic sustainability. For Saudi Arabia, its $630 billion economic development program is funded on the back of its national oil company, Saudi Aramco. In order for the country to meet its budgetary obligations, it needs current production levels priced at about $90. The same can be said for Russia; its government's largest revenue source is oil royalties. For the country to balance its budget, oil export prices need to be north of  $120. For both of these countries, it is imperative that oil prices remain high enough to prop up government spending.  (more)

Why Shorting the Aussie Is ‘Trade of the Century’ 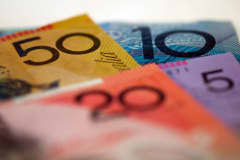 The resilient Australian dollar, which has overcome global headwinds to stay above parity against the U.S. dollar for most of the past two years, is due for a major correction, according to one analyst who predicts the currency could fall over 40 percent in the next 18 months.
“It’s difficult to see any clear major direction in any of the currencies other than the Aussie dollar longer term, which we obviously think looks like the trade of the century, trying to short the Aussie, “Paul Gambles, managing partner at advisory firm MBMG International told CNBC’s “Asia Squawk Box” on Monday.
Continue Reading at CNBC.com…

4 Things That Will Surprise You About Retirement

Retirement is supposed to be a time of leisure, when folks who've worked and saved their whole lives get to enjoy the fruits of their labors.
The reality is a lot more stressful. Consider just this one stat: Some 45% of Americans enter retirement still paying off their house. With no more earnings coming in the door, that puts a further strain on savings accounts.
In the video below, senior editor Dayana Yochim and Robert Brokamp, a Certified Financial Planner and advisor of Motley Fool Rule Your Retirement, discuss four of the most surprising things about retirement.

The best investing approach is to choose great companies and stick with them for the long term.


Stay away from an implied bet on gold by buying mining company stocks, Dennis Gartman says.

zerohedge.com / By Tyler Durden /
Whether it is due to the recent governmental attempt to enforce assorted gun controlling measures in the aftermath of the Newtown, CT shooting, or, merely driven by the same catalyst that saw a surge in gun sales four years ago, namely the presidential election, one thing is certain: America is weaponizing itself at an unheard of pace, with both Sturm, Ruger shipments and units produced surpassing 500,000 each in one quarter for the first time in history.
Shipments: